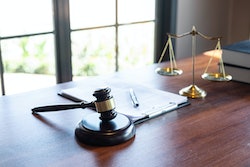 Emily Croucher fell in love with criminal law while attending University of California-Irvine’s law school. With her sights set on becoming a public defender, she accepted a post-graduation job with the Kentucky Office of Public Advocacy, relocated to the Kentucky-Tennessee border — and then, the bar exam, typically offered just once or twice a year, got canceled due to COVID-19. Although the National Conference of Bar Examiners is offering a remote exam in Kentucky in October, Croucher is stuck with a provisional licensure until then, meaning she has to be supervised by a licensed attorney. Here, the 25-year-old tells Bustle what the bar cancelation means for her plans to serve as a public defender — and the potential impacts on the people she would be defending.

Public defenders’ offices really struggle to get lawyers to serve in rural areas. I was drawn to Kentucky because I’m single, have no real ties anywhere, and knew there were places in the country with a dire need for public defenders. When the state hired me, I said, “Please send me to your office with the greatest need.” That’s how I ended up in the heart of Appalachia, in London, Kentucky.

I figured I’d move to Kentucky, study for the bar, and everything would open up by August, when I was supposed to start my job. As of May, the bar was still scheduled for the end of July. I’d been studying 50 hours a week for it. Then, just three weeks before the test date, the Kentucky Supreme Court canceled it. My hands started shaking when I found out. I submitted a petition for emergency diploma privileges so I can still do my job before taking the bar, but it was devastating.

If I don’t have my law license, other public defenders will have to pick up my slack.

I’ll start working this month, but without my law license, I’ll be essentially a glorified paid intern. I’ll observe my co-workers in court to learn the ropes, interview clients in jail, write motions to suppress, and interview witnesses. None of these things require a law license. But I can’t represent clients in court, which is the vast majority of a public defender's job.

I’ll have to take three weeks off in September so I can take the bar in October, and the next bar won’t be until February of 2021 if the October exam gets canceled, too. If you have a public interest job, this is a huge blow. If you’re at a big firm, you likely have certain accommodations from your employer. But my agency could have hired someone with a law license already, someone who could take cases immediately. What will they do with me if they cancel the bar again, and they have a lawyer on staff who can’t take clients?

My office sees primarily drug cases, as eastern Kentucky has a serious heroin and meth problem. I am concerned for the thousands of eastern Kentuckians suffering from addiction being put in prison for years when issues like substance abuse can be handled with more compassion. My office has 11 public defenders — I am supposed to be one of the 11 — and we see approximately 4,500 cases annually. That's 400ish per public defender each year, which is well above national guidelines. If I don’t have my law license, other public defenders will have to pick up my slack — that’s less time that they’ll have to process the cases they already have.

Prosecutors and the police often attempt to solve social problems — substance use, homelessness, delinquency — by criminalizing poor people: homeless persons arrested for sleeping in the street, someone with substance issues prosecuted for drug possession, and children charged in adult court.

In public defense, your job is to bridge the gap between who holds the power — the state — and who doesn’t — the accused. If I can’t practice law, what it means for my clients is simple: lack of access to justice.