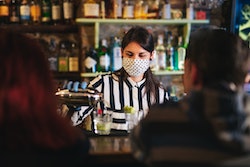 Since her bar and restaurant reopened on June 5, Erica, 40, a bartender and manager of Tower Tavern in Kansas City, is among the service industry workers returning to work during the coronavirus pandemic. “It is absolutely multiple times a day that we have to stop people from entering without a mask,” Erica tells Bustle.

From California to Michigan to Alaska, concerns over coronavirus outbreaks have reclosed restaurants across the country. Currently, only 13 states meet the current testing guidelines, as reported by the New York Times. An additional seven are near the target number of tests while 30 are well below the recommended level. While overall cases are decreasing, some states are seeing their highest number of positive weekly cases to date, reports CNBC.

A March report from the New York Times on workers who face the most risk found service industry workers like cashiers, hosts, and servers, among those who have a higher risk of exposure to the virus. Despite that increased risk, just 56% of service workers have access to sick leave, notably lower than the 74% of all workers who have access.

Of the bars and restaurants temporarily shuttered by coronavirus, over 50% permanently closed, according to a June economic report from Yelp. That amounts to nearly 24,000 closed restaurants and likely tenfold the number of employees impacted. Chain restaurants from McDonald’s to Starbucks have closed locations for good, unable to rebound from the pandemic shutdowns. Smaller franchises and local establishments have been hit even harder, left only with the option to close their sole storefront permanently or go into significant debt.

As some restaurants and bars reclose after attempts to reopen after the lockdowns, others are left with near-impossible decisions to make: stay open and risk exposure or close again and risk shutting for good. For bartenders, this means new regulations, new responsibilities, and, in many ways, a new kind of job.

"We all got an email stating we needed to come back or we’d be replaced."

Erin, 29, a server in Dover, New Hampshire, returned to work in mid-June after being furloughed from mid-March until mid-June. Though the threat of a second wave concerns her, Erin didn’t see much of an option. “When the state’s restrictions were first lifted, we all promptly got an email stating we needed to come back or we’d be replaced,” Erin tells Bustle over email, noting that, either way, unemployment would be cut off. “As a diabetic with a young child to feed, neither option was ideal," Erin says.

In Kansas City, where Erica works, the coronavirus outbreak has far from slowed down. The metro area is still seeing a rise in confirmed cases with weekly averages hovering between 300 and 400, according to the Kansas City Star. When Kansas City reopened in early May, the seven-day case average was 84. In response, Kansas City’s mask mandate has been in effect since mid-July.

In New York City, cases have dropped significantly since the height of the outbreak. Per the New York Times' database, New York City was averaging over new 5,000 cases daily in April, but that has since decreased to fewer than 300 new daily cases in the past couple weeks. Mayor Bill de Blasio enacted a city-wide Open Restaurants policy to help expand options for restaurants to reopen while still abiding by the coronavirus guidelines.

"I think opening outdoor seating in NYC has been great, but a lot of bars just don’t have that accessibility," says Monica, 39, of Brooklyn's Wild Birds."There’s been a huge blind spot there." Though Monica's bar opened with outdoor seating in late July, she recognizes that's not necessarily the case for every business. Even among those able to reopen, many restaurants are taking a financial hit from the lack of indoor dining. Though the restaurant industry is continuing to suffer, even in places like New York where the curve has been flattened, the government has made clear: no further relief efforts are coming.

Some patrons recognize the financial hit their servers have had to take and are doing what they can to counteract it. "People have been overly generous and understanding," says Courtney, 29, a bartender at Plough & the Stars in Philadelphia. Starting Sept. 8, as reported by Eater, Philadelphia will reopen indoor seating at restaurants at partial capacity for the first time since March 16. Plough & the Stars is among the restaurants that have had patio seating open since late June. Since reopening, Courtney notes that many people are tipping "above 20%, usually averaging 22.8% per night."

Many restaurants with no outdoor seating options may be able to finally reopen their doors after being shuttered for nearly half a year. Starting Sept. 30, New York City will allow indoor dining at restaurants at 25% capacity. As Gov. Cuomo announced on Sept. 9, restaurants will be able to allow limited indoor seating provided they meet other COVID-19 related guidelines, like closing at midnight and not offering bar seating. Provided there isn't a significant increase in New York's infection rate, Cuomo said that New York City restaurants could be allowed to reopen at 50% capacity in the coming months. Officials will make that decision by Nov. 1.

These are uncharted seas. We’re all just trying to tread water and stay afloat.

Among the four bartenders who spoke with Bustle, the list of new health and safety guidelines at their bars and restaurants is long. There are mask mandates, tables distanced at least six-feet apart, hand sanitizer stations, increased cleaning times, heavily sanitized shared surfaces, and awkward conversations with guests to prevent too many people from mingling. Even with these regulations, there are still risks. "I do know a few people who have gotten COVID from going to work," Monica says of fellow service industry workers.

"The majority of [patrons] are great and completely understanding," Monica continues, noting that she still has the occasional outlier who tries to sneak in without a mask. Erin, Erica, and Courtney also note that the majority of guests are compliant with the rules, apologizing when they misstep. The trickiest rule tends to be enforcing mask mandates — and the majority of bartenders Bustle spoke to have had to confront unmasked guests.

When asked what they wished guests would consider when they enter a bar and restaurant, all four service industry workers responded with a resounded chorus of “please, for the love of god, be kind.”

Erin says customers play a significant role in helping bars safely stay open. "I think remaining open can be done safely, but we're only as strong as our weakest link."

"I wish people would understand that most places are working with a skeleton crew," Monica says, noting that things like camping out at the table after you're finished or wandering around the restaurant put added stress on servers and the restaurant. "If you are not planning on tipping at least 20% or treating your server with respect and patience during a deadly pandemic, please reconsider eating out."

“Everything ... takes more time to be done safely,” says Erica. “These are uncharted seas and we are all just trying to tread water and stay afloat.”

More like this
An Expert Weighs In On The Viral Raw Carrot Salad Trend
By Alexis Morillo
Dolly Parton Released 4 New Baking Mixes With Duncan Hines
By Alexis Morillo
Do Green Powders Work As Well As TikTok Says They Do?
By Carolyn Steber
Learning To Love, Not Judge, The Lunchbox Wives Of TikTok
By Esther Zuckerman
Get Even More From Bustle — Sign Up For The Newsletter
From hair trends to relationship advice, our daily newsletter has everything you need to sound like a person who’s on TikTok, even if you aren’t.