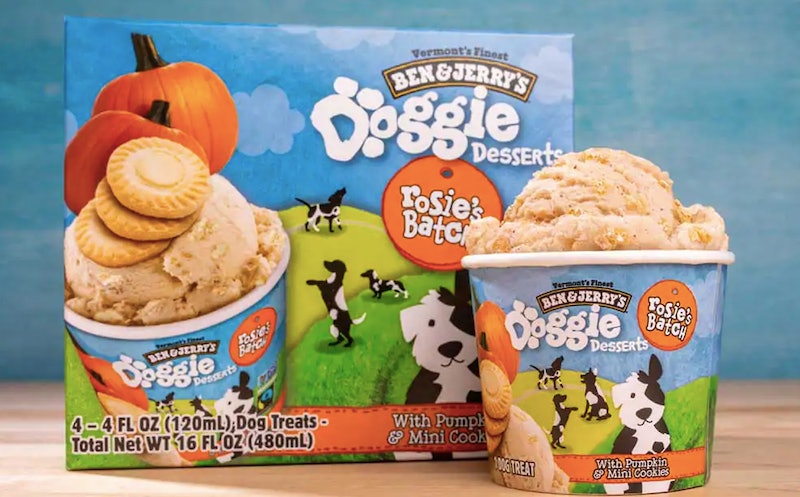 Nothing says a cosy night in quite like a good film and some ice cream. And now your pet will be able to share in the self-care goodness as Ben & Jerry’s have developed some doggie desserts. They’re seriously luxurious and come in cups similar to the human version of Ben and Jerry’s ice cream.

The new Doggie Desserts range from the Vermont-based ice cream brand offers two different flavours and has been developed with the wellbeing of your pooch in mind. It’s been reported that Ben & Jerry’s worked with a veterinary nutritionist to ensure that the treats are safe and easy to digest.

The first flavour is pumpkin with cookies and the second is peanut butter with pretzels. They’re made from the same ingredients Ben & Jerry’s uses in its non-dairy human desserts. And the packaging for their Doggie Deserts is very similar to Ben and Jerry’s human options – so make sure you don't mix them up!

Speaking about the development, Lindsay Bumps, global marketing specialist at Ben & Jerry’s, said that, over the last year, people have spent more on treating their animals as they've been such good company during lockdown. “This is an opportunity for people to treat their dogs as they’re treating themselves when they grab a pint off the shelf,” she said.

U.S. customers can buy Ben & Jerry’s Doggie Desserts on the Ben & Jerry’s website or in selected supermarkets and pet shops However, there's no word yet on when UK-based pooches will be able to get their hands on their very own ice cream.

More like this
Ben & Jerry’s New Sundae Flavours Are A Chocoholic’s Dream
By Sophie McEvoy
Pret & Costa’s Coffee Is The Strongest On The High Street, According To Which?
By Sam Ramsden
Here’s What TikTok's "Mascara” Trend Is *Really* About
By El Hunt
Forestcore Is About To Take Over Your TikTok FYP
By Sam Ramsden
Get The Very Best Of Bustle/UK
Sign up for Bustle UK's twice-weekly newsletter, featuring the latest must-watch TV, moving personal stories, and expert advice on the hottest viral buys.