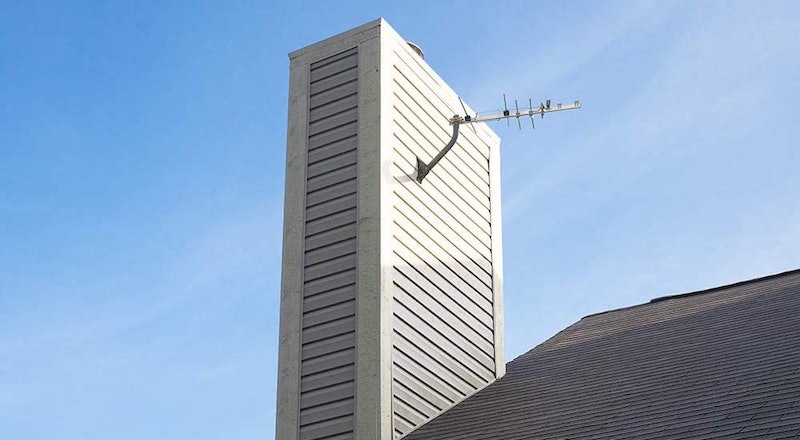 Unlike cable or satellite, broadcast television is free for the viewer. You don't have to subscribe to any kind of contract or monthly payment plan — but in order to get over-the-air TV in your home, you will want an antenna. The best outdoor TV antennas offer the strongest signal and the most channels, though they're not all created equal. Your best bet is to opt for an outdoor TV antenna with an operating radius that coincides with your closest broadcast towers, supports all VHF and UHF ranges, and offers high-resolution quality.

Before you do anything else, it can be helpful to determine which channels are available in your area so that you know what to expect. An antenna's operating range depends on a variety of factors, including the topography of the land and how high up you can install your antenna, but a longer-range antenna could help if the available channels in your area are limited. Certain channels are received through nearby broadcast tower signals, which the antenna captures and directs to your TV — the longer the antenna's range, the better the odds of picking up additional channels. Most antennas need to be pointed toward the aforementioned broadcast towers, but some (called omni-directional antennas) can pick up a wider range of broadcasts from multiple directions.

Broadcast frequencies are also an important factor. In the United States, broadcast frequencies are split into three categories: VHF-Low (2 through 6), VHF-High (7 through 13), and UHF (14 through 51). Choosing an outdoor TV antenna that supports the full range of frequencies, like all four picks below, means you won't have to pick and choose which channels you want to watch before you make your purchase.

Last but not least, make sure that your antenna supports high-quality resolutions. Over-the-air TV actually often offers a clearer picture than cable because it doesn't need to be so compressed. Different TVs support different resolutions, but any antenna you choose should at least support 1080p, the standard for high-definition viewing.

The RCA outdoor Yagi antenna has over 8,000 reviews and a 4.4-star rating. Buyers rave that it's the "best antenna ever" because it delivers a clear signal and a surprising number of channels. One reviewer gets "rock solid and crystal clear" channels from broadcast towers located 60 miles away. While the number of channels available to you will depend on where you live, some reviewers have accessed upwards of 100 channels with this antenna. Installation is relatively easy thanks to the pre-assembled design. Despite all that, it costs just $40. No wonder it's so highly rated on Amazon.

One reviewer wrote: "I have spent 3 years trying to find an antenna that would work for me. I am about 20 miles from a cluster of TV towers in Austin and most of my channels would come in well, but Fox would be very up and down and sometimes NBC. I tried at least 4 different antennas including indoor and outdoor. Finally, I bought this and I have more channels than before and ZERO hiccups. [...] All my channels have been crystal clear. Best $40 I spent in a while."

This one is a few dollars cheaper than the first pick, but it still manages to boast a wide range of broadcast frequencies (several reviewers cite using it with towers more than 50 miles away) and clear picture. The ANTAN outdoor antenna is also weather-resistant and has a built-in interference blocker to prevent wireless signals from creating noise. Finally, it comes with everything you need for a tool-free installation and can be mounted on a wall, balcony, or roof. While some reviewers say it's not the most reliable, others write that it's a "fantastic deal" if you're looking to cut your cable cord.

One reviewer wrote: "Very easy to hook up to tv. Works even better with the metal rabbit ears pulled out. Getting a clear picture and best of all it’s free. Best priced outdoor antenna that I found and includes the coax cable. I live 60 miles from the nearest city with TV stations."

For those who are a long way from many broadcast towers, a long-range TV antenna is the way to go. The Five Star digital amplified antenna is an investment, but it has a relatively wide range. One Amazon reviewer uses this antenna to pick up signals from broadcast towers ranging between "40 to 100 miles" away. The antenna can also pick up FM radio frequencies — but it doesn't support 8K resolution. It has built-in reflectors to strengthen the signal, and can support up to five televisions at once.

One reviewer wrote: "This guy brings in plenty of channels. We live two and half hours away from a major city. Picture quality amazing for antenna. [...] These are not the old rabbit ears!"

You won't have to fuss with positioning this 1 By One TV antenna in the right direction because it's omnidirectional. It has a special chip that clarifies the sound, picture, and colors and a fairly impressive operating range. One reviewer gets 50 channels "clear as a bell, many from 90+ miles away." While this antenna doesn't support 8K resolutions, users do appreciate that its smaller shape and all-white design are sleeker than most antennas out there. Plus, this antenna comes with a 90-day full refund and 24 months of customer service.

One reviewer wrote: "This antenna is perhaps the best of the small profile items on the market. Not only can it be easily placed and connected, [its] attractive size and shape is on par with [its] reception.The tech department was very responsive to my concerns and went above and beyond providing help in setup as well as giving direction to additional websites for station angle and location."