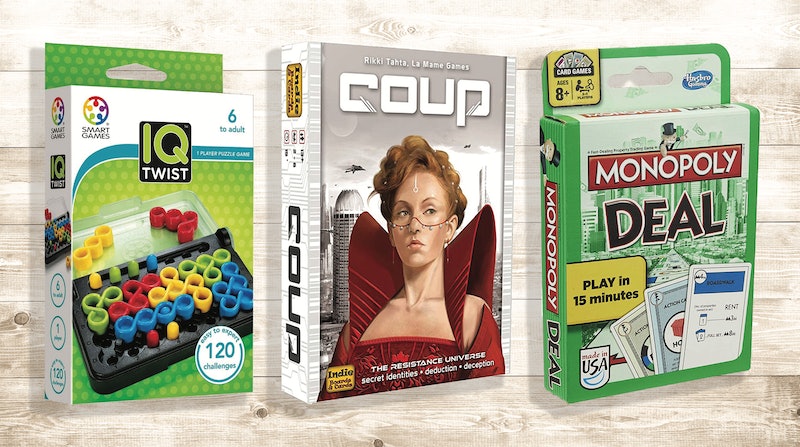 Whether you’re playing solo or with loved ones, a good board game can provide hours of entertainment. The best small box board games offer all the fun of a full-size tabletop game with the added benefit of coming in a compact and easy-to-transport package. The small size of these games, which measure no longer than 7 inches on any one side, makes them easy to carry with you or keep neatly stored away when not in use.

As you shop, consider what type of games you want to play, as board games (even small box ones) vary widely. Some small box board games are packed with all the complexity and action of their large-boxed counterparts, making play time as long as 45 minutes — but they're simply designed to take up less space. Strategic card games are a great option for saving space, too. Wordsmiths should consider going for a classic tabletop word game that never gets old. And if you enjoy brain teasers, opt for a puzzle game with enough challenges to be played up to 120 times.

You’ll also want to consider who you will be playing with: If you’re playing solo, opt for a game that offers a single-player mode. When playing with young kids, steer clear of overly complicated games that could be considered overwhelming or frustrating for them, and opt for a family-friendly or age-inclusive game instead. Alternatively, if you’re playing with a group of friends, you may want to choose a game that’s a bit more competitive.

Each of these board games takes 45 minutes to play or less — so although they’re on the shorter side, you can play multiple rounds if you’re looking for hours of entertainment. When you’re ready to take a break from your screens and treat yourself to some old-fashioned fun, turn to these small box board games, which you can find on Amazon.

1. The Small Box Board Game With The Longest Play Time

Brought to you by the makers of the fan-favorite Tiny Epic Galaxies, this action-packed small box board game takes place in 3030 and has players acting as different skilled, highly athletic pilots. Each game spans six rounds, in which players select four of eight actions to program (think: planting explosive land minds, collecting valuable resources, and purchasing machinery). However, there is only one Mech Suit — so may the best player win. Here’s the key: The more weapons you have, the longer you'll last in the game, according to Board Game Seek.

This game has the complexity of a larger board game, just slightly condensed down into a more compact package. (And if you’re looking for an even tinier box, take a look at the pocket-sized Ultra Tiny Epic Galaxies.)

Promising Amazon review: “It comes in a small box that is easy to bring with you and doesn't take up too much table space. It does have tons of small pieces but we haven't lost any yet! They all come in little storage bags. The pieces are my favorite part of the game- its fun to put the little bitty weapons on your robot. The game is pretty easy to learn/follow, but coming up with a good strategy is hard. It plays perfectly well with two people, which is a bonus!”

2. The Best Strategy Game For Families

This treasure-hunting game was designed with both kids and adults in mind. To play, everyone is tasked with balancing working together, hoarding hidden treasure, and preserving enough oxygen for deep-sea dives — and each player must roll the dice to move their diver either back towards the boat or deep in the ocean. The more treasure you have, the more oxygen you’ll use as you’re going deeper in the ocean, where the most valuable treasure lies. You just have to make sure you leave enough time to bring your treasures back to the boat.

Promising Amazon review: “A quick, strategy game for all the family. [...] Although gameplay is very simple the game can become quite strategic and so it’s much more complex than it appears.The box is tiny, so it’s a great game to carry around with you or take on a trip. It’s very easy to teach and to learn so you can bring your friends up to speed in no time. Very highly recommend this game for gamers of all levels.”

This bluffing card game takes place in a dystopian universe in which the government is run by several money-hungry CEOs while a majority of the population is impoverished. In response, a resistance group is attempting to overthrow the CEOs. Players take on the roles of powerful government officials and are able to bluff, bribe, and manipulate into power: placing you in direct competition with your rivals (aka the other players) to collect as many coins as you can.

Promising Amazon review: “This game is so much fun! My group of friends always plays this at the beginning of our game nights and it breaks the ice and gets everyone in the mood for some competition. It is also really nice because the games are very short even if you are playing with the max amount of people. This is a game of lying and it is really funny to see your friends getting sneakier with each game as they are learning how to play. I like this game so much I got the expansion to it which makes it a little more intense and longer. Great for traveling and you can take it anywhere and play it anywhere.”

4. The Best Game For Wordsmiths of All Ages

Boggle is simple and straightforward, yet still tons of fun. Players have 90 seconds to write down as many words as they can find on the grid. At the end of the round, each word is scored and the player with the highest score wins. If two or more players have the same score, however, you must start from the beginning. You can also use a timer and play the game solo to test your own word search skills.

Promising Amazon review: “I like that is compact and easy to put in your purse for travel, camping etc. It is a classic mind game and is enjoyable for those who like to compete with words.”

5. The Best Card Game That Riffs On A Classic

If you’ve played the classic version of Monopoly, you know the box isn't the easiest to carry around or store — not to mention how long the game can take to play. This Monopoly Deal Card Game maintains the competitive spirit of the traditional game, but it comes in a more compact package. One reviewer described it as “a fast forward version of the classic monopoly.” Another reviewer attested, “This game is as destructive as ‘real’ monopoly to your friendships and relationships. Lots of fun, if people are willing to have victory snatched from their palms and not hold a grudge afterward (which WILL happen).” Like the original, the goal is to collect sets of properties — and the hope is that luck’s on your side as you draw cards and make deals.

Promising Amazon review: “A round of Monopoly Deal is super quick to go by compares to the Monopoly board game which I don't have the patience to sit through. It is easy to learn, although one or two rules are debatable depend on what the players agree on. They're fun, strategic, and compact for traveling and storage.”

6. A Single-Player Puzzle Game With Hundreds Of Fans

IQ Twist players can put their problem-solving skills to the test by choosing from more than 120 puzzle challenges. The play time for most of the single-player exercises depends on the player and the difficulty level of the challenge (the challenges get progressively harder as you make your way through the booklet), but it starts at just a couple of minutes, according to reviewers. One user described watching their puzzle-appreciating father make his way through the challenges: “When he started, each level took about five minutes. Now they take an average of 20-30.”

Promising Amazon review: “Such a great game! Instructions are very simple to follow. Compact size is perfect for travel. The game is self contained within a sturdy box. The game itself has 3 levels for varying skill. I highly recommend this game.”

More like this
The 6 Best Nespresso Machines For Iced Coffee
By Megan Gray
The 5 Best Printers For Cricut, According To Crafters
By Maria Cassano
People With Beautiful Homes Secretly Swear By These Home Upgrades That Are Super Cheap
By Julie Peck
Amazon Keeps Selling Out Of These 40 Random Things That Are So Effing Cool
By Rebecca Martinson
Get Even More From Bustle — Sign Up For The Newsletter