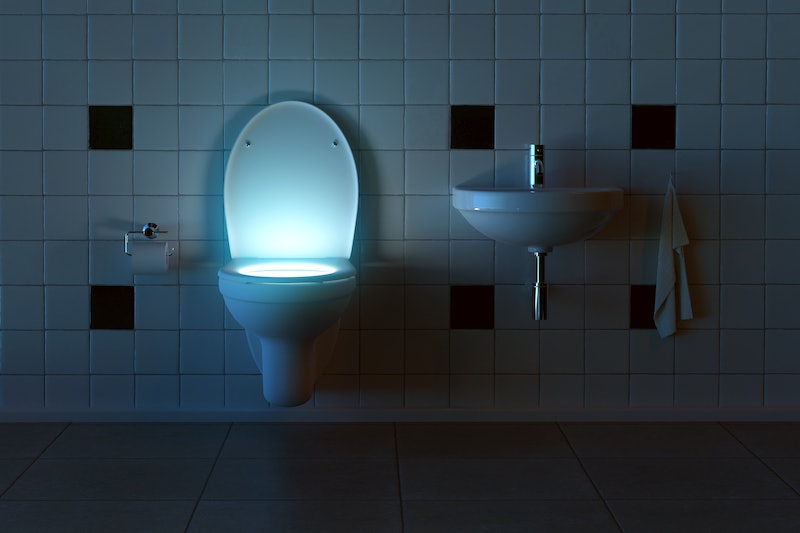 Similar to night lights, the best toilet lights are motion-activated and easy to install. You’ll need to consider brightness, preferred color(s), and how much flexibility you want in where you put your beam.

There are two types of toilet lights for you to choose from. A hook-on toilet light has a flexible arm that hugs the rim of the bowl so that the inside can be illuminated, while a motion sensor faces outward. Given this placement, it's easy to remove when you need to clean your toilet, change the light's battery, or just simply readjust its positioning. However, some may not consider it the most sanitary option, especially if it accidentally gets knocked in.

A stick-on, motion sensor night light, on the other hand, is not a conventional "toilet light," but it allows a bit more creativity in your placement (like on the wall directly above your toilet) that's not directly in the line of fire, so to speak. Just be sure the beams are directing where you want them to go before peeling off the strong adhesive to install them. This is especially important because the motion detection distance can vary — typically with a range of 10 to 18 feet. Depending on the distance from your bed to your bathroom, you may want your light to illuminate the way as soon as your feet hit the floor. However, if your toilet is in a high traffic area, a shorter detection range could help curb battery drain from false triggers (like from pets or rambunctious kids).

If you want to turn your porcelain throne into a fun, conversation piece or even want some assurance that your circadian rhythm won't be affected, look for a color-changing model— in particular, red light is known for not disrupting sleep as is yellow and orange. For even more customization, some have additional brightness settings that also make those middle-of-the-night trips a bit easier on the eyes.

Make nighttime bathroom trips less of a rude awakening with one of the best toilet lights below.

This Lumilux toilet light has an incredible 9,000 positive ratings on Amazon. The light's infrared sensor reacts to body heat, turning on when you're as far as 18 feet away, and staying on for two minutes after you've left the room. To conserve battery, it stays off if it detects another source of light is present (like the sun or overhead light). There are 16 colors to choose from, as well as a carousel function that cycles through them all and five brightness settings. The light's flexible arm was engineered to fit over any toilet rim, but lots of reviewers have also suspended the light over a towel rack, or a toilet roll dispenser.

Each light needs three AA batteries (not included) and there's even a handy low-battery indicator. Judging from the reviews, it will be months, or even years before you'll need to change them, though, and if anything should malfunction, your light comes with a lifetime replacement policy. You can also pick these bathroom accessories up in a two-pack or a three-pack. And you prefer a rechargeable option, there’s also a USB-powered version available from another brand.

One helpful review: "I bought this motion detection toilet light 2 ½ years ago. It is still working perfectly with the original batteries. I do not know how it could be improved: it picks up motion very quickly, the light glows brightly enough but not so bright that it disrupts night vision, it's easy to clean (not that it gets particularly dirty), and it's easy to remove and replace for toilet cleaning."

If you need to illuminate several toilets in your house, this two-pack of Ailun LED toilet lights is a great, wallet-friendly alternative to the Lumilux pick above that also has plenty of fan praise (11,000 five-star ratings and counting!). While there's no option to adjust brightness and only eight colors to choose from (including red), you can select one hue or set it to rotate. And with an up-to-16-foot motion sensor detection range, you'll still be able to trigger the light from a decent distance. The light will stay on for a full two minutes after the last detected motion and won't come on during the day or when another light is present. To power them on, you'll need three AAA batteries (not included) per unit.

One helpful review: "I am very light sensitive so using the restroom in the middle of the night without having to turn on a bright light is awesome. I have had theses for almost two years in two different bathrooms and the batteries are still going strong."

If you prefer to install your lights outside the bowl and don't want all of the bells and whistles of a color-changing model, these stick-on lights have adhesive backings that let you attach them to any surface, like next to the toilet, or on a nearby cabinet (or, you can opt for even more permanent placement using the included screws). The battery-operated lights (three AAA batteries needed per light, not included) have received more than 10,000 five-star ratings, with many users confirming that their warm, white glow is soothing enough for nighttime.

Keep in mind that the motion-activation range is a bit smaller — up to 10 feet— and you may need to wave your hands to reactivate them a few times (they turn off a quick 15 seconds after the last detected movement and stay off if any other light is present), but with three included in the pack, you could easily customize their placement to better light up your way into a larger bathroom, just note that the brand recommends a minimum of 5-feet between lights if you're hanging them near each other.

One helpful review: "These are great little motion-detecting night lights. I put one in the bathroom, bedroom and over my front door. They give just enough light to see safely in the dark without being glaring. They attach super easily to the wall. I used to command strips because the 3M adhesive can be difficult to get off-the-wall. I highly recommend them."

4. This Clever Stick-On Light That Changes Colors If The Seat Is Up Or Down

Though it's a popular potty training tool with a cheeky name, this Mr. Winkie light is great for any household whose members have a habit of leaving the toilet seat up. Installation is just as easy as any of the other picks on this list, but to get it to work properly, placement is key— simply stick it (double-sided adhesive backing is included) to the underside of your toilet's lid so that the sensor faces up and the light beam faces down into the bowl. Then, in the middle of the night, when motion is detected, the unit will automatically glow green when the seat is down, and red if it's lifted up — so you always know whether it's safe to proceed with your business. Either way, the light will shut off automatically 30 seconds after motion is last detected, and though the brand doesn't provide a distance trigger for the motion sensor, plenty of reviewers sing its praises as a handy nightlight.

Unless you decide to peel it off, the light will stay locked in place, so there's no worry about it falling into the toilet. However, note that that security means that it can be, as one reviewer reported, “a bit of a struggle to open" when it comes time to swap in new batteries (two AA, not included) because it requires some finagling to push and “slide” the light component out to reveal the battery holder.

One helpful review: "So cleverly designed and practical....no more falling in or near misses!! I love that it stays CLEAN and it’s curious-kid-proof too - little fingers can’t pry it off the lid! And it’s enough gentle light that I got rid of our old wall nightlight. Just ordered one for every restroom in the house."