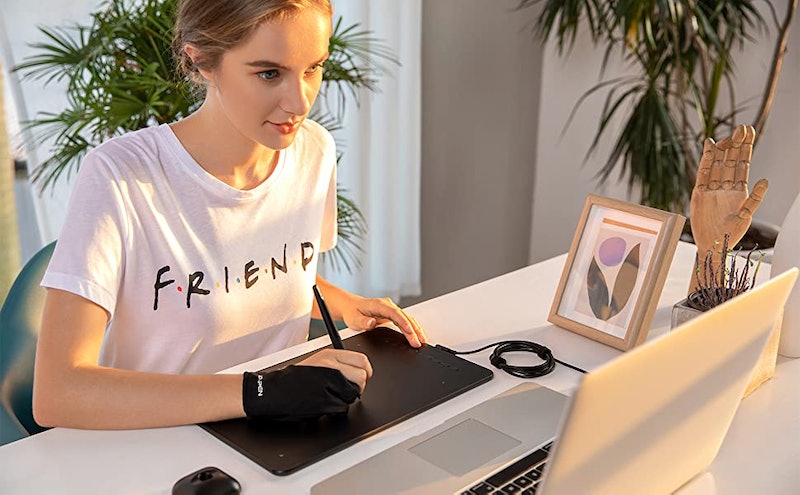 Wacom is widely considered one of the best drawing tablet brands out there, but there are competitors that offer similar features at a lower price point. When shopping for any quality drawing tablet, you should always consider the display size, compatibility, and connector type. That said, the best Wacom alternatives are highly responsive to your stylus’s movements (determined from pressure levels), and some offer tilt support.

First, make sure your drawing tablet will meet your needs and work alongside your existing technology. Display size is a personal preference that differs from artist to artist, but for the most part, the larger the screen, the more control you’ll have while drawing. (Keep in mind, however, that the price often increases with size, and a bigger tablet will be less portable, too.) Next, ensure that your drawing tablet works alongside your computer; most affordable options connect using USB or HDMI cables. After that, check the list of approved operating systems to ensure that your tablet of choice is compatible with your other devices.

Next, let’s talk about Wacom drawing tablets in particular. Wacoms range from simple desk tablets (which solely function as a drawing surface) to models with advanced on-screen options, so the specific features will differ depending on your price range and needs. However, no matter the model, Wacom sets itself apart with its smooth, responsive strokes. A higher pressure sensitivity will allow you to make finer distinctions while drawing, and all of the options below offer 8,192 pressure levels to rival Wacom’s best-selling models. Some advanced tablets also feature tilt support for your drawing stylus, which isn’t necessary but can make for a more realistic feel and more control, since it allows you to shade and smudge the way you would with an actual pencil.

These are the four best options if you’re looking for an affordable alternative to Wacom.

Huion is often considered Wacom’s top competitor because it offers advanced technology at a much lower price. If you’re looking for a well-rounded drawing tablet, the KAMVAS Pro 16 has a large, vivid screen, a battery-free stylus with tilt function, and six press keys in addition to a touch bar in order to enhance productivity. Last but definitely not least, its anti-glare and full-laminated technology help to mimic the feeling of real paper for a more accurate, realistic drawing experience.

One reviewer wrote: “Top quality, amazing price, buy one! Someone called this the Wacom killer, that doesn’t do it justice. This tablet is better than being an alternative, it stands on its own.”

The Wacom Intuos is a desk model that takes your strokes from a small, portable tablet and displays them on your laptop. Since it's not an on-screen device, it's simple and affordable — but the XP-Pen Deco is even more budget-friendly than the Intuos even though it's bigger. It features a high level of pressure sensitivity as well as tilt effect with its battery-free stylus, plus it has eight shortcut keys. If you're looking for a budget-friendly option that’s super portable, this is the way to go.

One reviewer wrote: “This is the perfect tablet for anyone who truly misses the old feel of Wacom products or a beginner that doesn’t want to go all in on an Wacom Intuos Tablet. [...] I don’t think I’ll ever go back to Wacom after finding this gem.”

A Wacom Cintiq can cost you more than $600 — luckily, the XP-PEN Artist22E Pro is considered a great alternative for much less. First, there’s the massive 21.5-inch screen with a 1080p resolution (with a driver that can support up to 4K); this allows you high precision and an extremely vivid display. Next, it has 16 customizable keys that you can customize, and it works for both right-handed and left-handed artists. Finally, it has an adjustable stand so you can find the ideal drawing angle, and reviewers rave about the glare-free screen, pressure sensitivity, and wide compatibility.

One reviewer wrote: “Having been a Cintiq user/owner for over 12 years, and Wacom fan for even longer, I must say I was worried about some of the alternatives out there when my Cintiq finally died. The XP-PEN is quality made, easy to configure, and has been well worth the purchase price compared to a Wacom product [that costs] hundreds to thousands more.”

4. The Best Wacom One Alternative

People love the Wacom One because of its beginner-friendly usability and versatile functionality — and the GAOMON drawing tablet offers all of that for less. It currently has more than 2,000 reviews and an overall 4.5-star rating on Amazon because it’s great for teachers, hobbyists, and professionals alike. The 10 express keys and high pressure sensitivity make for effortless customization, while the screen is large and vivid. Since it comes with a single three-in-one cable (which includes a USB, HDMI, and AC power cable), it’s also one of the most portable options.

One reviewer wrote: “I’ve tried (and returned) a LOT of these economical ‘Wacom alternative’ pen displays over the years and to my surprise I think I’ve finally found a keeper with this Gaomon product. In my humble opinion this one beats most of the larger and/or more expensive models from other brands hands down.”

More like this
The 3 Best Universal Remotes For Fire Stick
By Lauren Moison
The 5 Best Alternatives To Pyrex Lids That Are Sure To Fit
By Maria Cassano
The 5 Best Smart Speakers For Spotify
By Claire Epting
The Best Retinol Alternatives, According To Dermatologists
By Isabella Sarlija
Get Even More From Bustle — Sign Up For The Newsletter