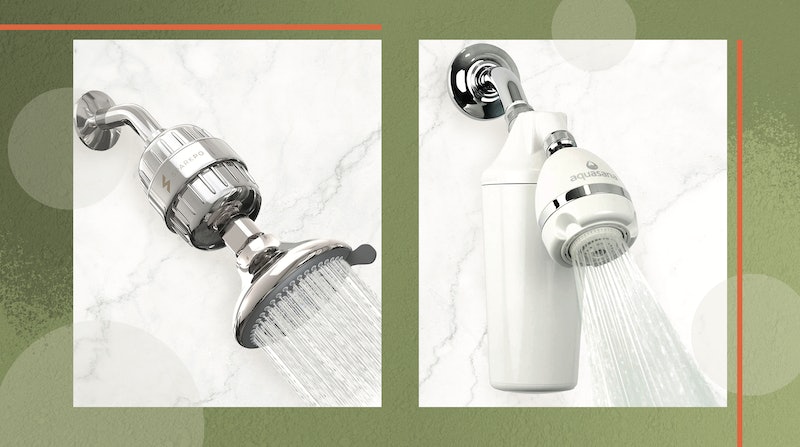 Water softeners remove calcium and magnesium — the two main minerals that create hard water — but a whole-house water softener system costs an average of $1,500. While they won’t technically soften hard water, the best water softener shower heads can help improve the overall quality of your shower water by filtering chlorine, heavy metals, and other impurities that may cause itchy skin and dry hair. And if you’re willing to spend more, there are water softening systems available on Amazon that offer a compromise between filtering power, convenience, and price.

When it comes to filtering shower heads, most options come with cartridges that have different layers of filtration to remove common water contaminants. For example, an activated carbon filter can remove chlorine and improve the smell of water, and studies have shown that vitamin C is another way to help neutralize chlorine. Similarly, Kinetic Degradation Fluxion (KDF) filters help remove chlorine, heavy metals, hydrogen sulfide, and iron — so while they can remove some minerals, a KDF filter won’t soften water on its own.

Whether you prefer a fixed or handheld design, shower heads are easy to install and maintain (you’ll just need to replace the filter cartridge every six months or so), and they’re an affordable way to make your water less harsh. But a large amount of resin is needed to soften water, and most shower head filters are too small for the task.

On the other hand, if your water contains high levels of calcium and magnesium, it might be worth investing in a water softener system. These will remove far greater amounts of hard water-causing minerals from your drinking and washing water, but because they connect to your home’s plumbing system, they’re not an option for most apartment dwellers.

While a shower head filter won’t totally solve your hard water problem, scroll on for the best water softener shower heads that can help by reducing many impurities, some of which are backed by NSF certification.

This fixed shower head is outfitted with a 15-stage filter, which includes layers of KDF 55, activated carbon, and vitamin C to remove chlorine, heavy metals, and other contaminants. You’ll need to change out the filter every three to four months using one of the brand’s refill cartridges (sold separately). Though it’s a fixed shower head, you can customize the experience by adjusting the angle or choosing one of three spray modes: focused massage, mixed gentle rain, and therapeutic massage. There are five colors to choose from, including chrome, gold, and nickel.

One positive review: “We have so much chlorine in our water and this shower head has changed our lives. My hair and skin are so much less dry and it’s actually making a huge difference in how long my hair color is lasting. Easy to install and great water pressure.”

If you prefer a shower wand, this handheld option has a 15-stage filter that includes layers of KDF 55, activated carbon, vitamin C, and more. The sleek chrome shower head is easy to install and comes with a 59-inch stainless steel hose, giving you more flexibility whether it’s to bathe pets, reach awkward spots, or clean the shower using the handheld wand. However, unlike the first pick, there’s only one water spray setting. You’ll need to replace the filter cartridge every four to six months (sold separately).

One positive review: “I just moved into a new place and the hard water was drying my skin, so I purchased this to help and I must say I am impressed. It definitely has helped my skin. I would like to install a water softener system , but for now this helps us.”

The transparent arm of this handheld shower head is filled with minerals balls, while the shower head itself holds a fragrant, vitamin C lemon balm cartridge. This shower head helps to remove chlorine, ammonia odors, lead, chromium, rust, iron, and other sediments, so while it doesn’t have a 15-stage filtration system, it’s a good choice for those looking to spend less. The shower head has one water spray setting. It comes with three refills of the lemon balm cartridges and one refill of mineral balls, but a hose is not included. The brand recommends changing out the lemon cartridges once a month, and mineral balls once every four months.

One positive review: “Love this shower head. The vitamin C smell is amazing and your skin is left super soft. My hair is loving it as well.”

4. A Deluxe Filter System That Removes 90% Of Chlorine

This NSF-certified filter system uses coconut shell carbon to reduce the amount of chlorine, lead, and iron in your water, while a KDF copper and zinc blend work to balance out the water’s pH level. The attached shower head has several flow settings, including massage, though you can also buy the filtration tank on its own and use it with your own shower head. You’ll want to replace the filter every six months with the brand’s cartridges.

One positive review: “Super easy to install, works perfectly, I can already feel a difference in how the filtered water makes my hair feel. Awesome product.”

A true water softener, this water regeneration system uses sodium to remove calcium and magnesium from your water, while also filtering out chlorine, iron, and sediment. The NSF-certified water softener needs to be hooked up to your home’s main water supply, so it’s best for homeowners, and though it’s not a shower head, it will soften the water supply in your entire house, including the bathroom and the kitchen. The water softener automatically calculates how much sodium you’ll need based on your water usage, and a low salt indicator will let you know when it’s time to refill. The refill frequency varies by household, but one reviewer mentioned using half a bag of salt per month in a household of four. A step-by-step installation kit is included but the system doesn’t come with salt pellets, so you’ll need to purchase a bag separately.

One positive review: “It has done wonders. My house runs off city water and it was really drying out our skin (even after applying lotion) and causing build up with our faucets. Since we’ve installed the softener our skin doesn’t have that dry cracked feeling and we’ve noticed less build up.”