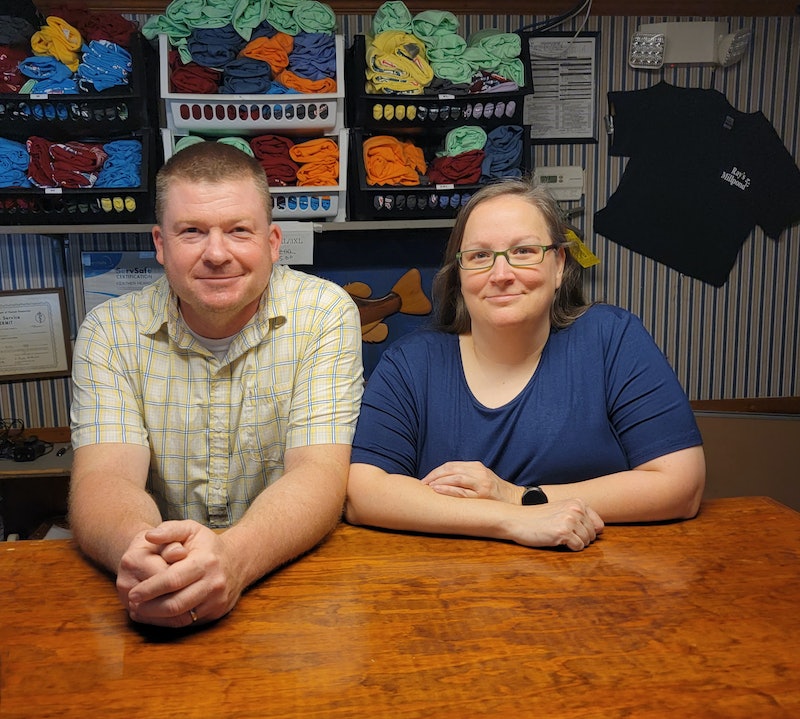 If you want a true coastal Southern experience, Ray’s Millpond Café should be one of the first stops on your list. Not only will you eat some of the best catfish in Georgia, but you’ll also be able to walk around back after your meal and see some alligators. Top that off with Southern hospitality — anyone who’s been knows — and you’ll understand why Ray’s of Ray City, Georgia, has been in business for over 50 years.

When the restaurant originally opened in 1963, it began as a fish camp. “People would come, fish in the pond, then take the fish they caught and prepare it in the restaurant,” Ray’s owner Heather Heard explains. She’s the third generation of her family to take over the restaurant’s legacy. Ann Campbell, her great-grandmother, ran the restaurant until the ’70s, when she passed it on to Heard’s father, uncle, and their wives, who ran it for 40 years.

At the end of 2019, her parents had decided to retire and put Ray’s up for sale. “As that became a reality,” Heard tells Bustle, “it didn’t sit well with me that the restaurant wouldn’t be in the family anymore.” Having spent 10 years as a graphic designer, she was tired both of being behind a desk and feeling the pull to carry on a family tradition. The timing felt right and Heard took over the business in January 2020.

While she laments that owning a small business can often mean sacrificing “big life moments or everyday ones like softball games,” Heard finds the community connection deeply rewarding.

“Not only are you providing income for your employees who need jobs, you’re making connections with the public,” she says. “People who have been coming here since I was in diapers, who’ve known me my entire life, see the people who are just happy because they enjoy the food.”

The good word of Ray’s extends beyond its Georgia roots. The restaurant has had guests from all 50 states and beyond, even international visitors who wouldn’t otherwise have heard of the town. With the proximity of a local Air Force base, the name often gets passed around the world by military members stationed close by.

The pandemic has been the biggest challenge Heard has faced yet, especially having taken over shortly before the world shut down. After closing for two months, Ray’s reopened in a limited capacity, but customers have been steadily returning. “To run a business of any kind, you have to build a relationship that is meaningful with customers and the community that you serve,” she says.

Though the pandemic and recent inflation have been hard on Ray’s, Heard has worked to keep prices as low as possible while still making a profit that allows her to pay employees fair wages and keep the power on. “We’re here to make a living, not a killing” is the family’s business motto. Fortunately for Heard, others have taken notice.

On May 31, 2022, Intuit QuickBooks and Mailchimp — two small business platforms focused on driving small business success — introduced a new day of recognition for small businesses everywhere: Small Business Hero Day. As part of their efforts, QuickBooks and Mailchimp awarded three small businesses across the United States with $20,000 each, for their heroic efforts that have either impacted an individual or community. As one of the three winners, Heard is looking forward to making repairs she’s had to put off, like new restaurant equipment and dock maintenance for the pier where diners can see alligators and turtles.

Ray’s former owner — and Heard’s father — Lamar is a former IRS employee who knew the importance of having a financial management system going into the restaurant business. The family has used QuickBooks since the beginning when the software was first introduced. “It helps us so much, especially with paying employees,” Heard says.

This restaurant by the pond is an American treasure — a place that shows what family, tradition, and community can build. As new generations discover Ray’s, Heard intends to keep the family-friendly atmosphere that the eatery’s known for. With the mounting challenges small businesses face, it’s more crucial than ever to evaluate their importance to the American landscape. But for Heard, it’s just what she’s always known.

“It’s so ingrained in me,” she says of taking over Ray’s. “I’m so excited to carry on the tradition, even though my parents warned me it would be very time-consuming.”