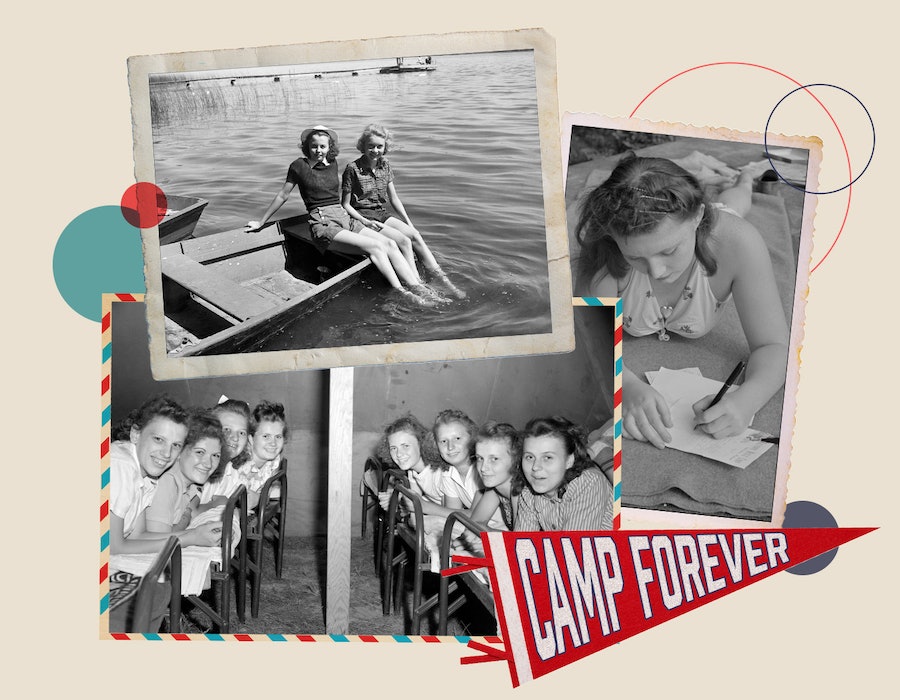 It’s a fact any kid who’s ever spent two months living in a cabin in the woods knows: You have your “school friends” and your “camp friends.” And they are not equal.

School friends are the people you have classes with, the ones who you carpool with, trade notes with, and party with on the weekends. You know them well. Really well! Maybe they’re even your best friends. But you don’t know them like you know your camp friends.

Camp friends are different. They’re the people you meet in an entirely distinct existence, one defined by color wars, bonfires, and faking your period so you don’t have to swim in a freezing cold lake. You live with your camp friends eight weeks a year, sleeping in bunk beds with just a few feet separating your stuff from theirs, though after a couple of weeks you can’t remember whose clothes are whose anyway. Camp friends are made when no parents are around — just teenage counselors more focused on getting laid than making sure their charges have stopped whispering after flashlight time ends.

A certain type of friendship emerges under these conditions, where there’s no Wi-Fi or stress about acing tests or getting into college. They form faster and with more intensity, thanks to the fact that they’re forged out of necessity and vulnerability simply because there is no real escape from camp. You can’t leave — not that you would want to.

I started attending sleepaway camp when I was 9, retreating to a lake in New Hampshire for two months during the summer. I loved it immediately, delighted by the idea of experiencing a world without the watchful eye of parents or teachers. It was the first time in my life I felt independent.

It was also the first time I felt the freedom to make friendships on my own. I fell fast and hard for my bunkmates, girls who were vivacious and spunky, who knew how and where to get free snacks and were eager to share their unlimited supply of Limited Too camisoles. Some of them were excellent listeners and consoled our homesick cabinmates, while others were patient teachers, explaining how to put in a tampon or form a French braid.

Soon, I learned the secret language shared among camp friends — that we all “lived 10 months for two” and that while at camp, “an hour feels like a day, a day a week.” When it was time to head home at the end of my first summer, I sobbed, heartbroken to leave friends who felt like family. (Again, I was 9… and dramatic.) We promised to write letters, call each other on our parents’ landlines, and talk on AIM after school. And we did, desperate to remind ourselves that we’d return next summer, even if it felt like a lifetime away.

As the school year ended and another session at camp loomed near, I felt nervous to see these girls again. We all had grown so much when we were apart, and I worried that we wouldn’t have anything in common, that all our old inside jokes wouldn’t be funny anymore.

“No matter what happened during the school year, we all knew that there was one constant: Summer would come, and summer meant camp. At least until we grew up.”

But as we reunited on the grassy hill outside the bunks, we hugged each other fiercely, and it was obvious nothing had changed: not our bonds. Not our made-up songs. Not our love of camp — and of being together.

And so, no doubt due to the privilege of having the means to do so, we came back, year after year, until camp took over big chunks of our identity. We attended each other’s bat mitzvahs, had slumber parties across state lines, and spoke endlessly about next summer — always next summer.

No matter what happened during the school year — unrequited crushes, divorced parents, spats with siblings, puberty-caused acne, moves to new towns, grief and trauma — we all knew that there was one constant: Summer would come, and summer meant camp. At least until we grew up.

All of these big-hearted feelings are why I decided to write about this kind of compact, explosive friendship in my new young adult thriller, The Counselors, which follows three unlikely camp friends during one messy, twisted summer that begins with the protagonist Goldie finding a dead body in the lake. Although it’s a murder mystery, The Counselors focuses on the intense and electrifying relationships Goldie has with her two best friends, Imogen and Ava. While Goldie lives in a small, rural town near camp, Imogen and Ava are among the wealthy elite who travel to New England for the summer. The three girls became best friends when they were small, before those differences seemed to matter, but when they’re all 18, working as counselors, they stop and wonder if they’d even be friends had they met now and didn’t have so much shared history at this one magical place, Camp Alpine Lake.

It’s a question familiar to many of those who stay friends with the people they meet during extreme experiences outside the confines of normal life, especially when they’re young. While working on this book, I kept asking myself whether, had I met them now, I’d be friends with the girls I met at camp so long ago. The answer is, I don’t know. We all work in different fields, in different locations, with varying interests and lifestyles. We have less in common than we did when we held leg-shaving parties on the lawn outside our cabin and spent hours dabbing sparkly eyeshadow to each other’s faces before DJ socials.

That doesn’t lessen my devotion to them or dampen how much I care for them — because when we all do get together, usually at big life events like a wedding or a baby shower, the distance between us disappears and we fall into the same routines, the same jokes, the same language we’ve had for more than 20 years. Because even now, none of us can let go of each other or camp, the first place we felt free.