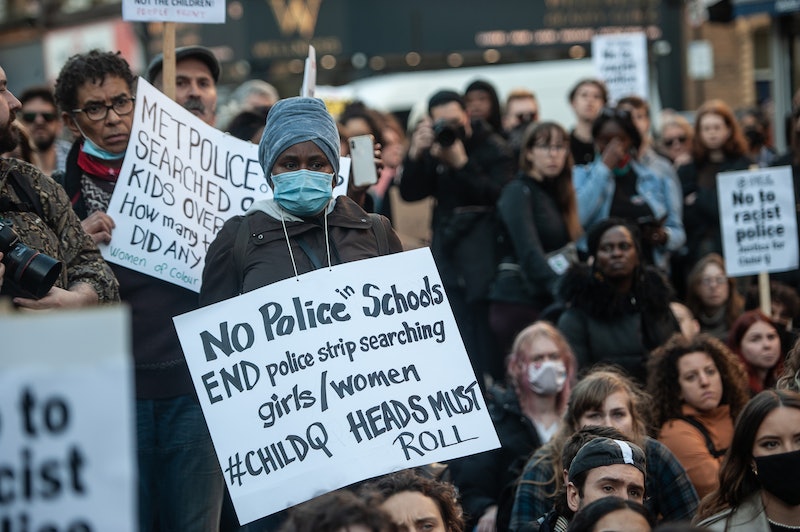 In 2020, a 15-year-old teenager named Child Q was pulled out of school and intrusively strip-searched by Metropolitan Police officers. Stripped down to her underwear while on her period, Child Q was subject to inhumane treatment by an institution that is supposed to protect her. It was a double failure, as the search was initiated by a teacher who called the police over concerns that the student was carrying cannabis. After the search, this was found to be untrue.

When this information came to light on Mar. 16, the story was devastating, confusing, and angered a lot of people. But one thing was for certain: Child Q was only treated this way because she was Black. This claim was further backed up by the Local Child Safeguarding Practice Review, which “held a firm view that had Child Q not been Black, then her experiences are unlikely to have been the same.”

The revelations surrounding Child Q’s treatment led to widespread protests, with hundreds marching through Hackney, London, in solidarity. And on Mar. 24, Mayor of London Sadiq Khan published his new plan for policing in London over the next three years. The report sets out four key priories: reducing and preventing violent crime; rebuilding trust and confidence in the police; supporting victims; and protecting people from criminal exploitation. It comes after recent data from City Hall shows that the public trust in police has hit record lows, with only 51% of Londoners saying they think the police is doing a good job locally.

But Black women, in particular, have been an afterthought when it comes to police brutality. And the stats don’t lie. In 2020, the Black People, Racism and Human Rights report found that Black women (91%) are more likely than Black men (77%) to feel they would not be treated the same as a white person by police. And just last year, the Valerie’s Law Petition was launched to push for “mandatory specialist training for all police and other government agencies that support Black women and girls affected by domestic abuse” after the tragic and preventable death of Valerie Ford.

“White women cry, and society is attuned to feeling her pain and supporting her. However, if I cry or show emotion, it’s a no-no.”

Black women are often met with suspicion when approached by police, and even when they are seeking help from the police themselves. This is something 40-year-old retired teaching professional Nyasha knows all too well, when she was allegedly assaulted one evening by an older white woman when leaving a London hospital.

“As I turned the corner deep in conversation with my manager, an older white woman randomly began repeatedly hitting me in the head,” she tells me. “I was shaken up, so my manager suggested I report it to the police but when I got to the police station, they questioned me as though I had provoked the attack. They didn’t want to take my statement and were fobbing me off. Weeks passed, and I eventually received a voicemail [from the police] to say that the cameras were facing the wrong way and they couldn’t do anything.”

Nyasha is acutely aware that her experience would have been massively different had she not been a Black woman. “White women cry, and society is attuned to feeling her pain and supporting her. However, if I cry or show emotion, it’s a no-no. How dare I? The accusatory language from [the police] really irked me.” The Child Q case saddened and frustrated Nyasha, not least because she was a minor.

“People had missed the fact that this was a child, not a woman,” she says. “A child in school who had been subjected to such degrading behaviour.” The aforementioned safeguarding review pinpoints “adultification bias” as a reason for Child Q’s treatment. Adultification is both a gendered and racial bias against Black girls in which they are perceived as more mature and subject to harsher punishment.

Jennie Grace, a 53-year-old artist and author from Greenwich, London, has witnessed and experienced adultification bias first-hand. “When working for a local charity, I was supervising a 14-year-old Black girl. She admitted to stealing a bottle of milkshake and as she walked out of the shop, she was surrounded by six police officers,” she says. “The male officers started to search the girl. I told them, ‘you can’t do that because she is a minor and you need her parents’ consent’. However, they wouldn’t listen, handcuffed us both and continued to search the child.” During this encounter, Jennie pleaded with the police to stop but they knocked her to the ground insisting she shut her mouth or they’d do it for her. “The child was crying and my heart felt for her as they were in her face screaming.”

Ebinehita Iyre, 29, has dedicated her life to the wellbeing of young Black girls. She’s the founder of Milk & Honey Bees, an organisation that acts as a safe space that allows young women and girls to flourish through 1:1 sessions and creative group projects. “Society doesn’t show up for Black girls, but Black girls show up for every cause,” she says. “My work started with Black boys and I still work with and support Black boys today. But I’ve made it my mission to support and work with Black girls because I see where they are missing in conversations.”

Iyere’s work is about making space for women and girls who are often deemed as hard to engage. She is creating a space for Black girls who exist outside the scope of help, and her passion is drawn from her own experiences. Growing up, Iyere would describe herself as more masculine-presenting, which she felt caused her more issues with police officers. “My relationship with the police was not as heavy as the boys in my community, but when they did try and search me, and when they did do things to me, I wasn’t treated like a child,” she continues. “I don’t believe in this bad apple nonsense; the institution [of policing] is overtly damaged, overtly racist, and not built to protect Black people, let alone Black children, let alone Black girls.”

Speaking to the review panel, the family of Child Q said that “she is now self-harming and requires therapy. She is traumatised and is now a shell of the bubbly child she was before this incident.” This is harrowing to read. Why is it that Black girls are having their childhood cut short because they must be preoccupied with staying safe from the very institutions that are meant to protect them? In her own words, Child Q admitted that she didn’t know if she’d ever “feel normal again”.

The consequences of these actions? Unsurprisingly minor. The two officers involved in the incident have been removed from front line duties and placed on desk work, while the teacher involved in the case has been sacked. Empty apologies have been given. These small acts will never feel enough when know that this will happen again. All of the unconscious bias workshops and training will not fix a system that is working the way it has been built. Policing is morally corrupt and not fit for purpose. “Someone walked into the school, where I was supposed to feel safe, took me away from the people who were supposed to protect me and stripped me naked, while on my period,” Child Q told the panel.

Although the nature of policing is the problem here, it is also down to schools and adults in authoritative positions not seeing young Black girls are intimidating adults. If Black girls cannot be seen as children even at school, what hope do we have at protecting them in wider society?

More like this
Boris Johnson’s Leadership Is In Question – Again
By Bustle UK
Windrush Victims Are Still Waiting For Compensation
By Sam Ramsden
5 Concrete Ways To Take Action Against The Rwanda Deportation Plan
By Rachel Mantock
The Families Of Grenfell Tower Are Still Waiting For Justice, Five Years On
By Bustle UK
Get The Very Best Of Bustle/UK