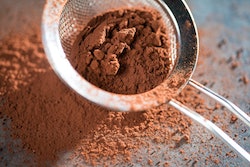 In what is perhaps the most whimsical news of the year, it was snowing chocolate in Switzerland earlier this week. On Tuesday, Aug. 18, the Lindt & Sprünglii company confirmed reports of chocolate “snow” dusting the ground surrounding its Swiss manufacturing plant. The internet responded with a resounding, “I want to go to there.”

Residents of Olten, the Swiss town where Lindt & Sprüngli’s factory is located, noticed fine particles of chocolate on cars and streets that looked very much like the result of chocolate snow. Before you pack up and move to Switzerland, this is not some meteorological phenomenon you can expect to happen again. As reported by the Associated Press, the cocoa “snow” was caused by a ventilation malfunction, specifically the cooling ventilation line that roasts cocoa nibs. That combined with strong winds lead to the dusting of chocolate powder near the factory.

The chocolate snow was completely harmless and did not lead to any Willy Wonka-esque disasters. The only “damage” done was to a car that was lightly coated in the cocoa snow. Lindt & Sprüngli offered to pay for any necessary cleaning but has yet to been taken up on the offer. On a related note, if anyone needs help clearing their chocolate snowfall, I will gladly volunteer my services/stomach.

While chocolate snow — not to be mistaken with chocolate rain — is a once-in-a-lifetime occurrence, this is far from the only food-related spill in recent memory. In 2018, a tanker carrying liquid chocolate overturned on a highway in Poland, leading to a road covered in melted chocolate. If savory spills are more your thing, perhaps this McDonald’s French fry truck spill will suit your taste. Highways across the world have been covered in everything from cookie dough to wine to 1,000 DiGourno pizzas because of food truck spills. Chocolate snow, however, is certainly a first.

Much to the dismay of chocolate lovers around the globe, Lindt & Sprüngli’s ventilation system has since been repaired. Pack up your brownies and cakes in need of a light chocolate dusting because the chocolate snow has ceased. We'll just have to enjoy our chocolate the old-fashioned way: shovel it into our mouths by the handful.