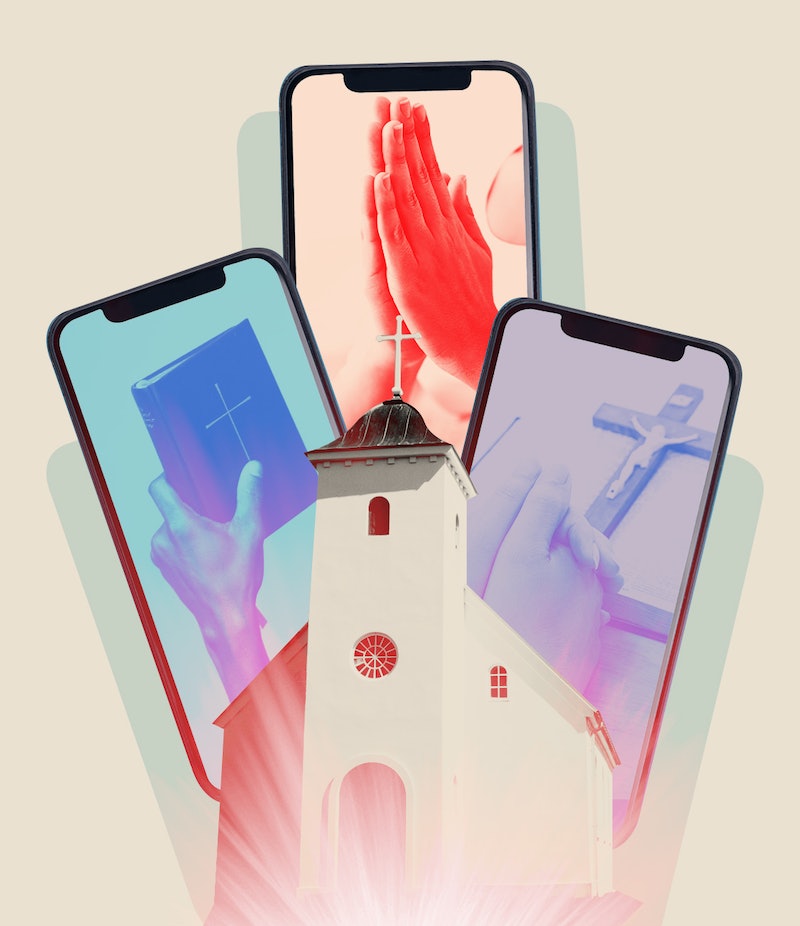 Liana Gordan says God used TikTok to save her.

Though the Ontario, Canada-based 17-year-old grew up with parents who identified as Orthodox, she didn’t spend much time in church as a kid. It wasn’t until last spring that she started really looking into Christianity for herself — and part of the inspiration to do so was seeing impassioned teens open up about their faith on TikTok.

“This app was used to save me,” she says in a video posted in November. “I was seeing Christian creators on my For You Page, and I was like, ‘Whoa.’ And I started reading my Bible.” Soon, she was making faith-centric TikToks of her own. Her articulate breakdowns of dense theological concepts, from eschatology to Calvinism, attracted 71.8K followers — catapulting Gordan into the world of the Christian creators who had first influenced her.

Gordan is part of an explosively-growing subgenre on the app. According to Evy Lyons, VP of marketing at influencer marketing firm Traackr, Christian TikTok — as measured by hashtags like #christian, #jesus, and #saved — drove more than 169 million engagements in 2020. Lyons says 1,790 active influencers are operating in the space. Many of them, like Gordan, have been making Christianity-centric content for less than a year, a testament to how quickly the niche has grown.

Though the Christian population’s decline in North America has been well documented, and teens are even less likely to identify as Christian than their parents, the burgeoning of the space on TikTok coincides with research claiming that about one-fourth of believers in the United States say their faith has actually gotten stronger during the COVID-19 pandemic. (Having all that time at home to create content certainly hasn’t hurt the proliferation of #Christian videos, either.)

While Christians are likely present on every social media platform, the potency of the community on TikTok feels unique. Part of what entices them is what entices anyone: It’s easy to go viral. “You can make a video, have basically no followers, but then it can gain traction and all of a sudden it’s on everybody’s For You Page,” says Gordan.

This is especially appealing to Christians who view converting others as an obligation of their faith. That’s part of why one of the best-represented subgroups is evangelicals — a group that emphasizes, among other things, the need for personal conversion and the importance of evangelism. The definition of the term “evangelical” is “something of a moving target,” as scholar Jemar Tisby notes in his book The Color of Compromise, a point underscored by the fact that the teens interviewed for this article gave mixed answers about whether or not they identify as evangelical.

“You can make a video, have basically no followers, but then it can gain traction and all of a sudden it’s on everybody’s For You Page.”

Still, based on their videos, a significant percentage of the most-followed Christian TikTokers appear to align with the four primary characteristics of the movement as outlined by the National Association of Evangelicals. If they don’t always want to label themselves accordingly, politics may have something to do with it.

“There’s a very specific connotation to ‘evangelical,’” says Elijah Lamb, an 18-year-old creator from Florida. “When some people hear evangelical, they hear ‘Trump supporter’ — it carries this ‘American conservative’ connotation with it, and that has nothing to do with how I identify myself and my faith at all.”

Nevertheless, he acknowledges that from an “ecclesiological standpoint, technically speaking,” he’s an evangelical.

Uncomfortable though they may make Lamb, the political connotations aren’t unfounded, and they highlight tensions playing out in the American church at large. About eight in 10 white evangelicals voted for Trump in the 2020 election, following a pattern that’s held since the Reagan era: White evangelicals have tended to support Republican candidates, while “Christians of color... have tended to support Democratic candidates,” according to Robert P. Jones, CEO of the Public Religion Research Institute. For a generation more aware of and eager to condemn racism than their parents were, the color line within evangelicalism can be troubling.

Whether for that reason or others, many Gen Z evangelical creators seem wary of being defined by a political party. They often sidestep explicitly political content on their pages (save for the issue of abortion, about which they make many, many videos). And they emphasize their desire for unity among Christians and highlight the sense of community they have with other Christian creators. (To what degree that includes Christians on the more progressive end of the political or theological spectrum remains unclear, however — Gordan, for example, is relatively quiet about politics on TikTok but has tweeted about “leftism” being “antithetical to the gospel.”)

Gordan says she’s in a group chat with other creators she talks to every day. “We’ve never met, but we feel like genuine sisters,” she says, adding that she’s now closer to them than she is to almost anyone her age who actually lives in her town. At its best, she thinks Christian TikTok can function like a church, offering encouragement, community, and resources to learn more about faith.

Like any congregation, the TikTok community looks to specific individuals for guidance. “If Christian TikTok were a church,” Gordan says, “I feel like Elijah Lamb would be the pastor. He leads a lot of the stuff that goes on. ... He’s definitely been called to be a teacher.”

It’s a responsibility that Lamb, who has more than 658,000 followers, takes seriously. Though the high school senior started accruing a following in 2019 through his mostly comedic content, he’s transitioned to increasingly faith-centric videos that discuss everything from biblical passages to the nature of the Christian TikTok community. He says he’s especially focused on being “a leader and adviser to all the [TikTok] ministers.” As his profile has grown, he’s begun traveling to preach in real life and organizing initiatives like a digital “testimony night.”

“If Christian TikTok were a church ... Elijah Lamb would be the pastor.”

He’s also been getting approached a few times a month by followers who recognize him when he’s at the mall or out and about with friends. He sees a big TikTok platform as an important opportunity to share his faith but recognizes its pitfalls, too. “There is a kind of added pressure to be 18 and have it all together, and to just be thrown into the spotlight all of a sudden and not crumble,” he says.

That pressure isn’t unique to Gen Z, even if platforms like TikTok are enabling it in new ways. Josh Harris was a teen in the ’90s who experienced his own pre-internet version of evangelical superstardom. At 17, he created a magazine for Christian homeschoolers and began traveling around the country to speak to audiences of up to 4,000. By age 19, he was writing his first book, I Kissed Dating Goodbye, which went on to sell more than a million copies and became pivotal in shaping how a generation of Christians viewed romantic relationships.

Now in his late 40s, Harris looks back with mixed feelings on the spiritual influence he wielded as a teen. He says one of the beauties of youth is an ability to see things in black and white, which can be necessary to challenge the status quo. But in recent years, he’s been grappling with the impact of his former writings, which encouraged Christians to avoid so much as kissing before marriage and proposed a return to courtship, rather than dating, as a way to find a potential partner. He now believes these books, penned before he had real experience with sex, marriage, or dating, had profound negative impacts on some of his readers.

“At the time, you view the success that you meet, in terms of reaching an audience, as a sign that God’s behind you and he’s blessing you,” he says. As he’s grown older, Harris has become more cautious about taking on that level of spiritual authority in other peoples’ lives.

Harris went on to pastor a church of his own for more than a decade, but he eventually became so convinced of the error of some of what he had become most famous for through his first book that he renounced it, discontinued its publication, and apologized to those he’d impacted. When he announced in 2019 that “by all the measurements that I have for defining a Christian, I am not a Christian,” and later that he was getting divorced, it was a shock to the community that had held him up as a model of godly relationship.

But when Harris talks about what he’d hope for the TikTokers living out the 2021 parallel of his young adulthood, he still sounds every bit the pastor concerned for their spiritual well-being.

“There are some inherent dangers to being a Christian celebrity when you’re young. Your identity can get wrapped up in your audience, where your own sense of self is tied to thinking, ‘I am a Christian spokesman, I am TikTok famous for Jesus.’ If that intermingles into your spirituality, that makes it sometimes difficult to figure out why you’re actually doing what you’re doing,” he says. “There are other pressures that are on you that are not there for the person who is just walking with Jesus, living a quiet life.”

Lamb agrees “100%” that these are real dangers, and he recently took about six weeks off from making new content to slow down and recenter his focus on “walking in humility and purity and not finding [his] identity in a TikTok account.” But he doesn’t ultimately see the influence he’s wielding or the pressures that come with it as a problem so much as a responsibility that needs to be stewarded well.

“Your identity can get wrapped up in your audience, where your own sense of self is tied to thinking, ‘I am a Christian spokesman, I am TikTok famous for Jesus.’”

“It’s really easy to start believing the lie that all you are is your phone — that you don’t really matter unless you’re contributing something or being productive,” Lamb says. “But I think ministers of all ages are prone to believe lies like that, not just young influencers. I don’t think the potential danger is a reason to not be in online ministry.”

What those pressures will mean for this up-and-coming generation is yet to be seen. Some may become the new faces of evangelicalism and remain as such their whole lives. Others, like Harris, may turn their backs on the faith they once so boldly advocated for. And yet another group may walk a line between the two, deconstructing the evangelicalism they grew up with but finding a way to hold onto Christianity, albeit in a changed form.

But for now, all that’s clear is that Gen Z is making its mark on the spiritual landscape.

“I want to be a spokesperson for Christianity in my generation,” says Gordan. “Because Christianity has something to say about the world today.”

More like this
How To Turn Off TikTok Profile Views So You Can Stalk Other Accounts In Secret
By Alexis Morillo
Ashamed Of Your Screen Time Stats? Here's How To Change That
By Alexis Morillo
Wait, Does Liking Someone's IG Story = Shooting Your Shot?
By Alexis Morillo
Learning To Love, Not Judge, The Lunchbox Wives Of TikTok
By Esther Zuckerman
Get Even More From Bustle — Sign Up For The Newsletter
From hair trends to relationship advice, our daily newsletter has everything you need to sound like a person who’s on TikTok, even if you aren’t.