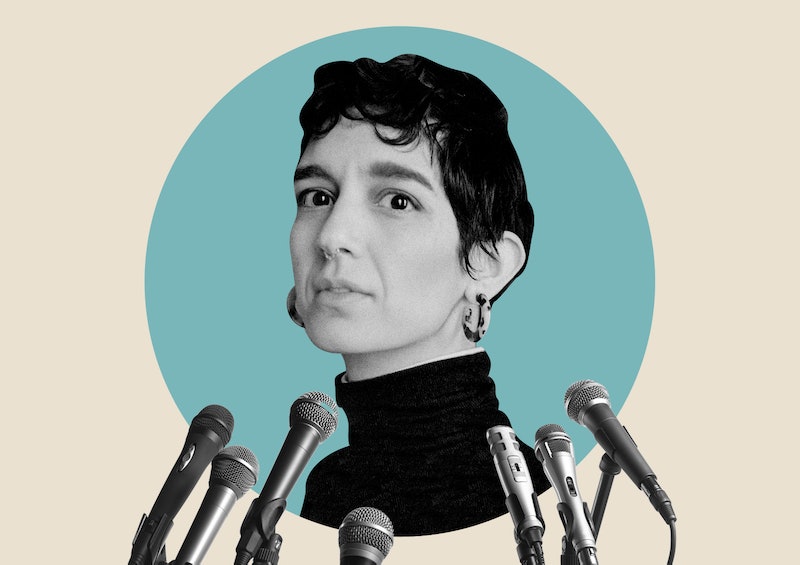 In Bustle's Quick Question, we ask women leaders all about advice — from the best guidance they've ever gotten to what they're still figuring out. Here, Co-Star CEO and founder Banu Guler tells Bustle about making sense of a meandering career path and the only app she pays for.

You might not know the difference between your sun sign and your moon sign, but you do know about Co-Star, the AI-powered astrology app known for its devastatingly accurate push notifications, because people really like to talk about it. That, ultimately, is CEO and founder Banu Guler’s main goal.

“The point of Co-Star isn’t that it’s an app or that it's astrology, even though those things are both true,” Guler, 33, tells Bustle. “It's that it brings people together whether or not they’re into astrology. ... The magical thing about astrology is that it makes conversations possible.”

Guler, a Scorpio, describes her life up until developing Co-Star as "completely chaotic." "This is the first time the threads have woven together," she adds. Co-Star launched in October 2017, but Guler began thinking seriously about the app around December 2016, pulling from her early career in design and user experience — she taught herself how to code — an education in psychology, and an inherited interest in astrology. Using public data from NASA, proprietary AI, minimalist graphic design, and punchy wording, Co-Star offers daily horoscopes, birth charts, celestial compatibility reports, and an unconventional place for friends to connect. Today, Guler says nearly 20% of young people in the United States have it on their phone.

Heading into Co-Star’s third year on top 10 charts in the App Store, Guler reflects on the challenges of working in a male-dominated industry, what inspires her, and why Karl Marx and Glossier founder Emily Weiss are both on her list of inspirations.

These days, everyone thinks they have a great idea for an app. How hard was it to bring Co-Star to life?

On one level it’s easy: You have an idea, you design it, you launch it. But going from a crappy idea you’re talking about with your friends when you’re drunk to an app that people actually like involves a few more steps.

My advice to people who want to pursue their own apps is to ask yourself what apps you care about, what companies you admire, and how they got from point A to point B. Let that inspire you to make your own choices. It’s also about a very large sprinkling of luck and hitting on the right thing at the right time with the right people around you.

What apps do you care about?

Personally, I don’t think there are a lot of apps that I feel really inspired by. I feel much more inspired by things with richer traditions, like art, literature, therapy. For messaging, I love Signal because it’s especially oriented toward privacy and security and that feels important in this moment, and iMessage for texting people. Picture This, a plant identifying app, is the only app I pay for.

What was the biggest hurdle in launching Co-Star?

I tend to rebrand any minute failure or hurdle as neutral, for better or worse. They’re data points or mechanisms that get me somewhere more interesting. But some of the bigger hurdles have been scaling rapidly — there’s a small number of people in the world who know how to scale up to support millions of simultaneous downloads and users, and that's been our struggle of the year. We are constantly hiring good, smart people who we want to work with — our team is majority people of color and female — and it’s hard to find non-cookie-cutter tech bros.

In the U.S., only 2.7% of venture capital dollars go to female CEOs, 27% of people in computing roles are women, there’s a pay gap, and it affects the entire tech community. Female engineers don’t have that many years of experience, because they’re not getting hired. I’ve had to quit jobs over crappy men, but a lot of people don’t have the community around them to say “[expletive] that guy.”

The other issue is that because the tech industry is mostly college-educated white men, the apps that get built serve those people, and that perpetuates the cycle. It feels good to provide a different space. We're always thinking about how to build things that lead to more intimate conversations, deeper reflection, and meaningful social interactions.

Are there any leaders you look up to? Someone who has mentored you or inspired you?

Authors more than anyone. Karl Marx is on that list because he's a rigorous critical thinker, Anne Carson for her incredible poetics, James Baldwin because he loves to punch you in the stomach when you didn’t even realize you had a stomach. In a professional sense, Rei Kawakubo, the founder of Comme des Garçons — her entire thing is making fashion that blows your mind. That philosophy inspires me. And Emily Weiss of Glossier, an early investor in Co-Star, an Aries who is taking over the world.

How do you stay organized on a daily basis?

I have a very advanced system of loose papers and stacks of Post-It notes — my desk is just covered in paper. Then for each project, I use a Google Doc or Sheet. I am comfortable in my chaos.

How have your work-life balance needs changed since launching Co-Star?

I've had to get a lot more rigorous about not working. For years I worked a little on vacation, and now I take hard breaks. In general, I’ve become more clear about work and non-work time. I need to get off my computer to take a break, cook, take a bath, go for a walk — no screens.

What are you most proud of in your career?

Making something that people care about. That gets me out of bed in the morning. There are young women who deeply love the app. It’s something that’s meaningful to them. That makes me proud.

More like this
Chelsea Clinton On The Best Advice She Ever Got From Her Mom
By Brianna Kovan
26 Ghost Story Podcasts To Get You Ready For Halloween
By Jessica Booth, Mia Mercado, JR Thorpe and Emma Carey
20 Smart Devices Under $35 That’ll Change The Entire Vibe Of Your Home
By Emma Carey
Here's How To Get Your iPhone To Update Automatically Forever
By Emma Carey
Get Even More From Bustle — Sign Up For The Newsletter