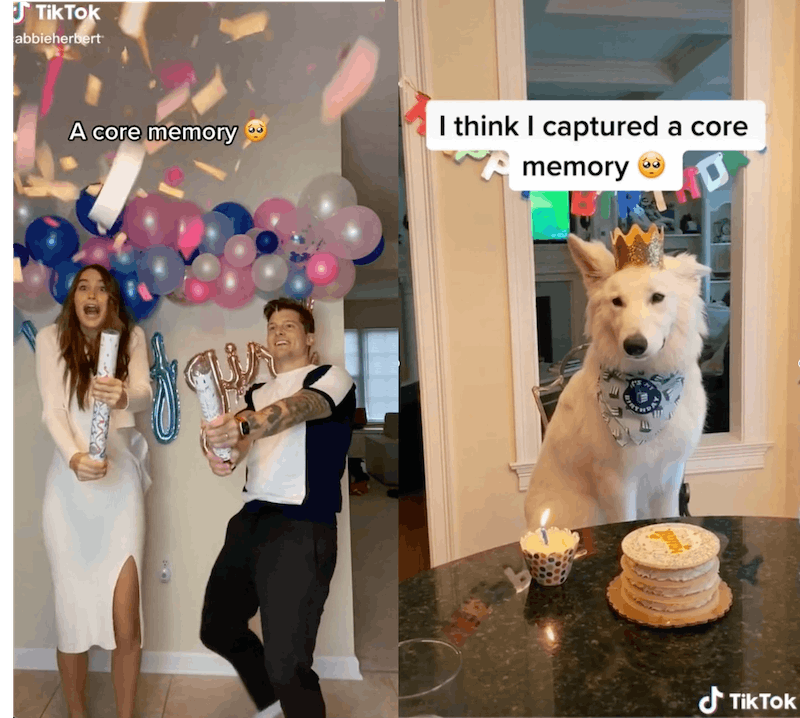 A home run with the bases loaded. A proposal on a crowded street. Blowing the candles out after “Happy Birthday” ends. These emotionally charged moments are cinematic on their own, but add a twinkly piano soundtrack and an echo-y voice effect, and you have one of TikTok’s most tear jerkiest trends: the “core memory” meme. Most trends on TikTok ask you to film something new, but the core memory trend asks you to mine your hard drive for something so precious, it’s core to who you are. Since the end of January, people have been posting videos on TikTok showing special life moments, augmented by a nostalgic audio track and dreamy narration. Videos tagged #corememories have nearly 600 million views, and the signature core memory audio track has been used on 1.5 million videos.

While it might sound like a legit psychological term, a “core memory” is an idea Pixar dreamed up for the 2015 movie Inside Out. It describes events that had strong emotions tied to them that in turn, became formative experiences — like in the movie, when main character Riley plays with her best friend Meg for the first time, or scores her first goal in hockey.

According to therapist Caroline Given, L.C.S.W., the trend is a reflection of the desire to create a cohesive narrative out of people’s favorite experiences. “It can be very powerful and empowering to be cognizant of this process, and realize that you can select what to emphasize in your own life journey,” Given tells Bustle. “I see it as a form of narrative therapy. It helps inform people that they’re the narrator of their own life and I think being aware of how experiences define you can help us make meaning out of existence,” she says, adding that it can be an antidote to life feeling chaotic or out of control.

Ready to show the world what parts of your camera roll make you, you? Here’s how to partake in the core memory TikTok trend:

Search the depths of your camera roll for clips that hold weight for you. While anything could be a core memory, the most profound clips make you want to ugly cry, beam, or immediately send to friends with the watery eyes or heart on fire emoji. Like a “the” photo, you’ll know when you see it. Once uploaded to TikTok and trimmed, tap Next.

Use The Core Memory Audio

Most videos in the core memory trend use the Cornfield Chase - Piano audio track. Though you don’t have to, it’s popular for a reason — the gentle notes sound like any emotional movie scene that’s trying to pull on your heartstrings. To find it, tap Sounds on the lower left and type it into the search bar.

If there’s audio in the video, you can put an echo effect over it to make it sound like a whimsical dream or distant memory. Combined with the music, the effect really gives the video that key nostalgic energy. Just tap Voice Effects on the vertical right menu, then scroll until you find Echo.