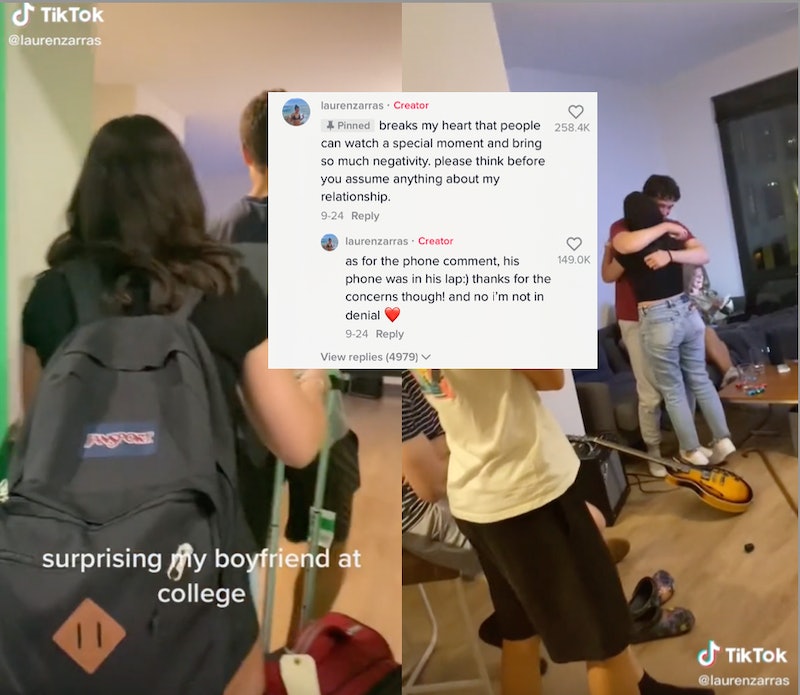 On Sept. 21, college student Lauren Zarras, 20, posted a TikTok of herself surprising her long-distance boyfriend, Robbie, at college. The video was set to the tune of Ellie Goulding’s “Still Falling For You,” a twinkly romantic power ballad, and captioned “Robbie had no idea.” Beyond having no idea that his girlfriend was coming to visit, Robbie — sitting on a couch next to three other women — doesn’t seem overtly stoked to have been surprised. In fact, he seems caught off guard. Maybe he was stunned. Maybe he was speechless. Or maybe, allege the TikTok detectives — who have created #couchguy, a hashtag filled with videos that slow down the footage to get a closer look at just what Robbie was up to when his girlfriend showed up unexpectedly — he’s cheating, and that explains the video’s weird vibes.

Romantic ambushes like this are common on TikTok — the #ForYou Page loves an emotionally charged or particularly cinematic lover’s reunion. But this video, which is neither particularly well lit nor Notebook-esque, has 55 million views, a hashtag, and hundreds of follow-up videos. On Couch Guy TikTok, millions of people are wondering: Why did the girl next to him scootch away when the door opened? And what was he doing with his phone? And who filmed it? And was Robbie really happy to see Lauren? And what happened after that awkward hug?

Hundreds of videos and comments speculate about the couch guy and couch girl’s relationship, insinuating that she’s “in denial” about what he’s been up to at college. (Zarras pinned a comment to the original video confirming that she is not, in fact, in denial, thank you very much.) Other TikTokers are using the swirl of attention around #CouchGuy to make meme-like parodies. In one, a bride surprises her groom before the wedding and he’s on the couch with all of her bridesmaids, stashing his phone when she enters; in another, the poster catches his cats in a compromising position after coming home early.

For their part, the couple is riding the wave of attention with follow-up videos standing up for their relationship and shaming TikTokers for gaslighting them. “Not that I should be proving anything to you guys,” Zarras says in a video that refutes a claim that Robbie hid his phone upon her arrival, a common point of issue in #CouchGuy TikTok conspiracies. In another video, Zarras asks her family members what they think of couch boy. Her father says, “I know couch boy from when he’s sitting on our couch and Robbie’s great.” Her mom agrees. They all laugh.

On Oct. 4, Zarras went on the podcast Tea with Publyssity to set the record straight, confirming that all of the girls on the couch knew that she was coming to surprise Robbie (and that the one sitting next to him even has a boyfriend herself). That “hair tie” on his wrist? It’s actually a magnetic bracelet she got him for Valentine’s Day — she wears a matching one in white. As for how being TikTok’s main character is affecting their relationship, she says that they’re both “positive people” who are taking the fame in stride. “We know what happened, we know our relationship,” Zarras said. “We’re both able to look at the comments and honestly laugh about them because some of them are so crazy.”

Robbie — username @souljawatchambassador — even christened his TikTok grid with a video speaking directly to the haters, writing, “Hey, Couch Guy here... everything isn’t true crime... don’t be a parasocial creep.” The caption reads “I love @laurenzarras , she’s the best. #couchguy.”

While the couple might be baffled by the amount of people who have dedicated time and energy into dampening their flame, they’re also leaning into the spotlight. On Oct. 4, Zarras shared that she’d be selling #CouchGuy merch: For $25, you can own a t-shirt with an illustration of Robbie sitting on a couch — without a phone, or female couch-mates.

More like this
How To Turn Off TikTok Profile Views So You Can Stalk Other Accounts In Secret
By Alexis Morillo
Ashamed Of Your Screen Time Stats? Here's How To Change That
By Alexis Morillo
19 Instagram Captions For Celebrating Black History Month
By Ayana Lage
This Wordle Rival Is Taking Social Media By Storm
By Sam Ramsden
Get Even More From Bustle — Sign Up For The Newsletter
From hair trends to relationship advice, our daily newsletter has everything you need to sound like a person who’s on TikTok, even if you aren’t.