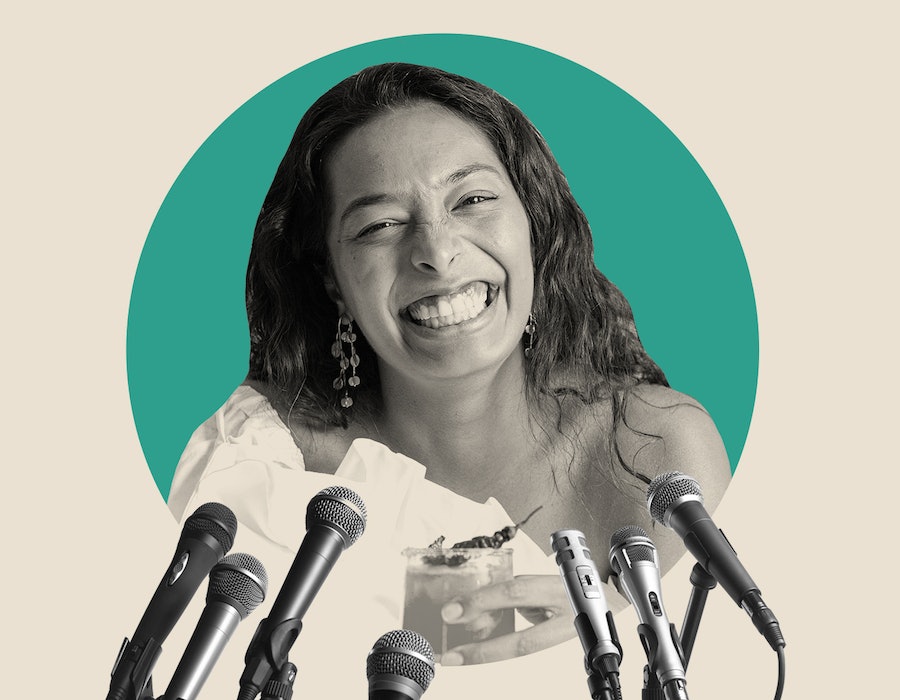 In Bustle's Quick Question, we ask women leaders all about advice — from the best guidance they've ever gotten to what they're still figuring out. Here, Diaspora Co. CEO and founder Sana Javeri Kadri tells Bustle about finding her way in the food industry.

Before graduating college, Sana Javeri Kadri held jobs at vineyards, olive groves, urban farms, and bakeries. But despite being surrounded by food, her experience with her daily spices was, well, lackluster.

“The flavors that I grew up with were not just underrepresented, but also just bad,” Javeri Kadri, who was born in Mumbai, India, says of living in the United States. “The turmeric that I was getting sucked. I really thought pepper was a nasty spice until I started sourcing ours.”

By “ours,” she means the varieties now sold by her spice company, Diaspora Co. Following that realization about turmeric, Javeri Kadri moved home in 2016 to connect with farmers who believed in prioritizing the taste of their spices over aesthetics, even when the latter was more profitable. She launched Diaspora Co. with a single-origin turmeric in 2017, while working other jobs to pay the bills.

“I was a 23-year-old punk with no money to my name, trying to find farmers who believed as deeply in this vision,” says the now 28-year-old, who’s based in the Bay Area. “That meant finding really kooky farmers who in some cases had the luxury to think beyond money — and in that, they had really matched my energy.” Today, Diaspora Co. sells more than 30 different ethically sourced spices, along with a chai kit and various merch collabs. Javeri Kadri, along with Diaspora recipe editor Asha Loupy, also recently announced a cookbook, titled The Diaspora Cookbook, slated for release in 2024.

How did you decide to make the jump to running a spice company?

For my senior thesis, I turned an elevator into a chai stall [as an installation that] interrogated the history of chai. Tea was forcefully brought to the Indian subcontinent (pre-partition) because [the British] were like, "Oh, it would be great if they grew the tea and bought it from us." South Asians didn't like the taste — adding spices, milk, and sugar to the tea [to make chai] was an act of rebellion. That was a metaphor that was really beautiful to me. From there, the jump to having a spice company is actually pretty short because I was already thinking about spices as a tool of power. South Asia has so much indigenous knowledge around spices that's been passed down over thousands of years.

Did you have a backup plan going into this?

I didn’t do Diaspora full time until the fall of 2019. Cooking at a Mexican restaurant two days a week, plus tips, paid for rent and therapy. Freelance photography provided any money that I put into the business. I didn’t have health insurance. That's literally how I was cobbling together Diaspora for the first couple years.

The caveat there is, I also have supportive, wealthy parents in India. If I needed to suck it up and live with them or for them to lend me money, they’d say sure. I'm so aware of what a privilege that is. But even in 2019, it wasn't that I had a backup plan — it was just that I needed four years to learn how to scale a business and had to earn money some other way.

As a business owner, who do you go to for advice?

My business coach is my closest adviser. He and I have a standing meeting once a week for an hour. It's like therapy. I'm also part of a group for Bay Area natural food CEOs who I can ask for recommendations. I also have multiple group chats with BIPOC women in the food space, where we ask questions like "Did this person scam you?" or "Do you trust this vendor?" It’s been really important to remember that those are also relationships to be cultivated, and we're not just each other's Rolodexes. We're also there to be friends to each other. We'll share vendors and resources, but we'll also talk about our breakups and our love lives. We're also people outside of being CEOs.

You have to learn that sh*t is going to hit the fan and disconnect from it. My adviser calls this elasticity. For example: Maybe two years ago, hundreds of thousands of dollars of pepper got lost between the co-packer and the warehouse. It was eventually found, but for two days, my heart was in my mouth thinking the whole business could collapse tomorrow. Recently, the same thing happened. I was like, "It'll show up. Otherwise we'll file an insurance claim or we'll shut down the company, whatever. One of those three things will happen. I'm going to go to the gym now."

In this business, you can only think through what you can control today. There's no point losing sleep over something that’s out of your hands. So I turn off my laptop at 4:30 p.m. I go to the gym, and I talk to my parents. Sometimes I do have to turn my brain back on from 7:30 to 10:30 p.m. to take calls in India, then it’s harder to fall asleep. I’ll usually take an edible or watch or read something.

What’s been the biggest challenge over the last five years of running Diaspora Co.?

Probably growing as a leader. I was a kid when I started this company, and now I'm responsible for 15 humans’ career development. Making sure that we're doing right by them has been scary and hard. Knowing how to run a performance review in a way that makes sure my employees are growing, learning that a manager's job is not to chastise them. For somebody who never really had any work experience, those were all new things.

What advice would you give someone who wants to start their own small business?

So many people come to me with brilliant ideas, but they're completely incapacitated by their own overwhelm. They look at the big picture and think that they’d have to get all of these things right in order for it to work. My packaging and my website sucked for years. You have to think one step at a time.

I also find so many BIPOC founders selling themselves short, thinking they need a white co-founder or a guy co-founder for the finance stuff. You don't need that. Know your power, know your story, know what you can hire for. Those are my two big ones that I tell everybody. Your worth will give you confidence.

More like this
Starbucks Released New Menu Items For The Summer
By Emma Garza
A Beginner's Guide To Drinking Whiskey
By Alexis Morillo
How To Make The Watermelon, Feta, & Mint Salad Trending On TikTok
By Emma Garza
6 Abortion Advocates To Follow On TikTok
By Sara Youngblood Gregory
Get Even More From Bustle — Sign Up For The Newsletter