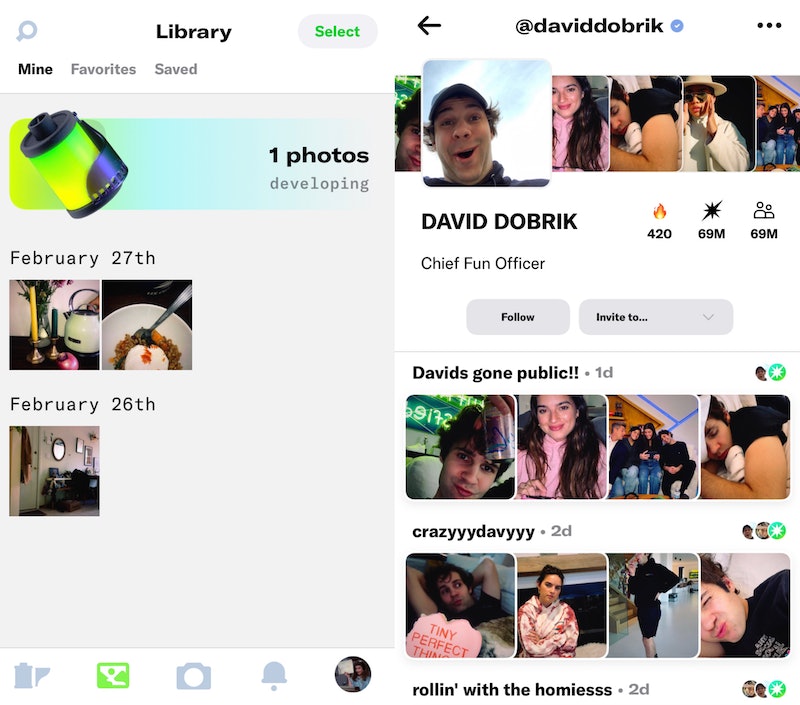 Back in the '90s, a disposable film camera was the only way to capture picture-perfect moments, imperfectly, on the go. Since then, their infamous fuzzy quality has made them a nostalgic novelty — popping up on wedding tables and on celebrities Finstas. Now, the disposable camera experience has been digitized into an elite app called Dispo. The invite-only photo-sharing platform is said to rival Instagram, thanks to its Gen Z allure and experimental social features.

Advertised with slogans like "live in the moment" and "be yourself," the app, developed by none other than YouTube personality David Dobrik, is positioning itself to be the anti-app. Currently in a (somewhat buggy) beta test mode that debuted in February, the app is only available to people who have been invited to use it. Each invitee is awarded 20 invitations to pay forward, and over the last week, the app has been accruing users, curious to see its staying power.

"I'm still getting a hang of Clubhouse. Do I need to download this? How long will it be cool for?" Becca, 29, says, in response to receiving an invitation to join the app.

Claire, 33, says, "My first thought after downloading this app is that my life is not interesting enough for me to want to be on it, but now I just want to make it more interesting."

How To Use Dispo

The main interface of the app, currently available on iOS only, is meant to look and function like a disposable camera. (Think: lots of neon graphics.) There's a small rectangular viewfinder, which doesn't have any zoom function — users only have the ability to take a selfie, a forward-facing photo, and use a flash. Oh, and forget witty captions and hashtags — there's no caption features on Dispo. Once you hit the shutter, your photo will blast off into the cyberspace version of the pharmacy's overnight photo counter, and you won't get to see what you captured until 9 a.m. the next day. Until then, you'll get a counter in the "Library" tab that shows how many photos you have developing.

One of Dispo's marquee features, "Rolls," gives it a unique social element. In the same way that you might pass around a disposable camera at wedding IRL, the Rolls feature allows multiple users to contribute pictures to the same album. If you take a photo for a shared Roll, each user will see if there's a photo developing, and will get to see that photo when it's ready. You can create a new public or private Roll by tapping the bottom of the camera, then clicking the plus sign in the top right corner. You can add people to Rolls to let them contribute; they'll show up in the app's main page, a news feed for, literally, yesterday's news.

Unlike Instagram or TikTok, there's no explore function — users need to manually search for friends on the app or invite them themselves. You can discover new people to follow by clicking around.

After a year of isolation, new users seem glad to have a safe way to collaborate. The natural low-fi appearance of a disposable film roll looks a lot like a distressed Instagram filter, and the thrill of a snap that can't be edited or precisely captured is just about as close to candid as possible in the year 2021.