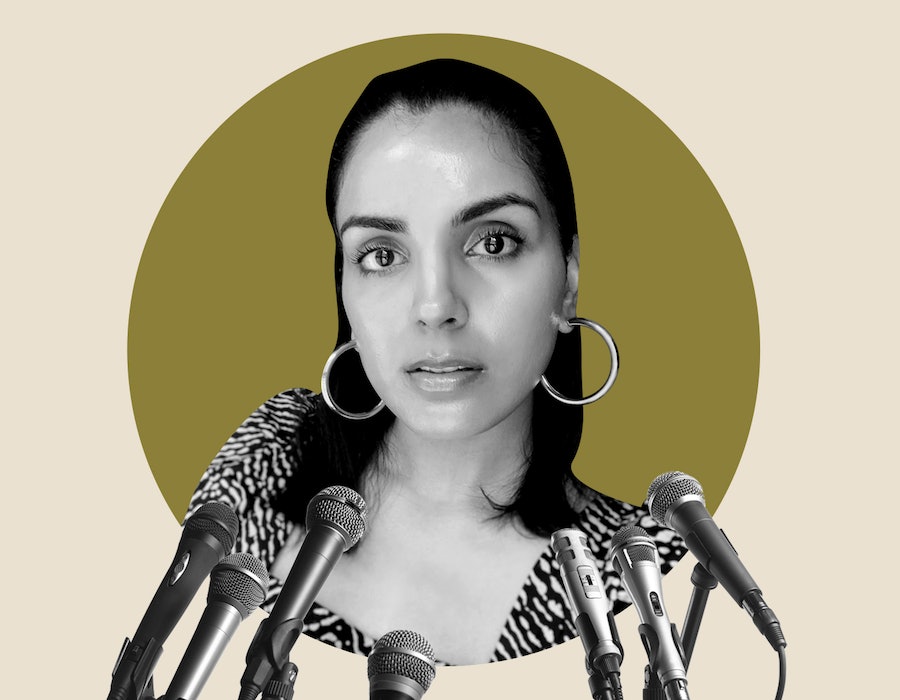 In Bustle's Quick Question, we ask women leaders all about advice — from the best guidance they've ever gotten, to what they're still figuring out. Here, Instagram's Divya Kunapuli tells Bustle about embracing what makes you unique, transitioning from politics to tech, and the app's efforts to make users feel more at ease during the pandemic.

With the country turning to Instagram more now than ever before, Divya Kunapuli, Instagram's Product Marketing Lead of Well-Being, is focused on making sure that the app's one billion users feel safe. "We know people will only express themselves if they feel safe and supported," says Kunapuli, who's responsible for some of the app's most popular tools, like Restrict and Donation Stickers. "We released a feature that put offensive comments under a screen to prevent people from engaging with them. And, we're expanding our nudge warnings to give people more education when they post things that might break our rules related to harassment."

Before the 2018 Midterms, Kunapuli helped launch the app's first-ever civic engagement features, including an interactive “I Voted” sticker that helped users find their polling location and a “We Voted!” shared Story to see all your friends who used the sticker. With the 2020 Election here, Kunapuli calls the Voting Information Center — which pops up when you open the app and provides information on registration, drop-off locations, ballot tracking, and more — one of the "best investments" the company has made as part of an effort to help 4 million voters register this year.

"We want to ensure that people feel informed and have the right information in front of them," Kunapuli says.

On the heels of the election, Kunapuli shares how social media influences politics, the importance of saying no, and why you should feel empowered to ask for a raise.

You double majored in English and political science. What drew you to tech?

DK: Politics was my calling card, whether it was working on Capital Hill or running for office. Once I got to D.C., I worked for a leading technology provider to the Democratic party and progressive organizations. From there, I immersed myself further in the tech world and eventually, Instagram came calling. Working on the Well-being Team has been a natural transition for me because I work on everything from civic engagement to charitable giving and anti-bullying.

What does the intersection of politics and social media mean to you?

DK: If you're not using social media, then you're probably not running a successful campaign. Billboards and television ads cost a ton of money, but it costs nothing to go live on Instagram. The way Alexandria Ocasio-Cortez utilizes social media is inspiring — she's known for breaking down complex, lesser-known issues in layman's terms for her younger followers on Instagram Live. All your potential constituents are at your fingertips with social media, especially on Instagram, where you have a greater chance of reaching young first-time voters.

"If you don't say no sometimes, what ultimately happens is that your best and most transformative work will be left in the dust somewhere."

What's the biggest hurdle you've had to overcome in your current role?

DK: The concept of making it work by any means necessary. When you're more junior in your career, you want to prove yourself, so you take on as much as you can. What I've learned over time is the art of delegation, so that I'm not taking it all on. If you don't say no sometimes, what ultimately happens is that your best and most transformative work will be left in the dust somewhere. The work I'm most proud of has been when I've taken risks, but that requires focus. In order to do that, I can't take on 90 projects.

What’s the worst career advice you’ve had to tune out?

DK: When a woman asks for a promotion or raise, she's often told, "You should be happy with what you have, and maybe you'll be able to ask for more in five years." When I first graduated college and was working my way up, I would dance around the topic of a promotion. I figured my hard work would speak for itself. Being young and being a woman of color, it felt like a lose-lose situation, but I've learned over the years that you have to ask anyway. If you're rejected, you're rejected, but you shouldn't be afraid to take that step.

For my first promotion conversation, I rehearsed with one of my friends. I did research to better understand my market value. I had an entire script! I may have gone overboard, but I walked into that conversation with my manager full of confidence and walked out with a promotion.

And what’s the best career advice?

DK: As I was figuring out my next step post-college, one of my early mentors said, "At some point in your career, you're going to be asked to talk a certain way, act a certain way, dress a certain way. Don't assimilate." At Instagram, I work with some of the smartest, most well-educated people, so it's easy to experience massive imposter syndrome. What I've learned though is that I was hired for a reason. I bring something unique to my team and the company. I will continue to learn and evolve, but it's important that I don't change what makes me unique and protect it as much as I can.