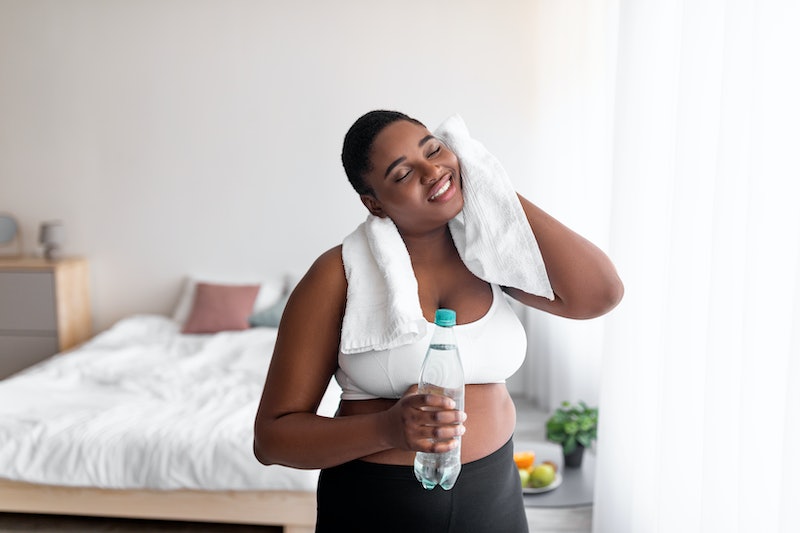 I have a friend who barely sweats when she works out, and TBH, I really don't get it. She looks like a goddess when she leaves the spin class we do together weekly, while I, on the other hand, am a sweaty, tomato-red mess. She's even gotten to the point where she's stopped bringing water to classes, supposedly to encourage her to sweat more — which sounds totally counterproductive to me. But does it work? Does drinking water make you sweat more or less? It's an interesting question, so let's take a look at the evidence.

"Lots of advertisers advertise water and say you have to drink two or three litres a day. That’s medically incorrect. If you go to intensive care you will be put on 1.5 litres of fluid per 24 hours.” Whitley told The Daily Mail. "If you drink more, your kidneys have to work extra hard to get rid of this fluid load. Then you sweat it out, which makes people sweat even more." (It’s important to note that science hasn’t totally proven this out — hyperhidrosis could have a genetic component or other unrelated cause that is not necessarily tied to your water intake.)

Other health professionals assert that water consumption and sweat production aren’t directly related, despite what my friend believes. “Drinking water will not make you sweat more or less,” Stephanie Taylor, health and wellbeing expert at StressNoMore, tells Bustle. “If you find yourself sweating too much, it may be down to the weather conditions, the clothing you are wearing, or the level of exertion; meanwhile, not sweating enough is likely dehydration.”

Sweat is your body’s way of regulating your internal temperature. “When your temperature rises as you work out, your sweat glands release water through the surface of the skin, so drinking water while working out is essential,” Taylor says. “Hydrating regularly aids the process and allows the body to cool down and replenish any water lost.”

Sarah Elliott, Ride Instructor at Psycle spin classes and founder of Vault Coaching, agrees that there is little relation to how much water you drink and how much you sweat during exercise. "From what I have found, the two are not correlated," she tells Bustle. "The amount that you sweat during a workout is dependent on your cardiovascular endurance, as well as your genetic build up. These are the two elements to consider not related at all to your intake of water."

She goes on to explain that the benefits of hydration outweigh any potential nuisance from heavy sweating. “There are certain types of exercise where you would naturally sweat more, like Psycle, so as an instructor, I would recommend replenishing your body not just during and after the class, but beforehand,” Elliot says.“There's greater risk of fainting and not being able to regulate your body's temperature if you go into a class dehydrated. We need to promote better hydration in sports such as indoor cycling."

How Much Water To Drink

The NHS currently advises adults to drink between six and eight glasses of water a day, equating to about 1.2 litres. But this number may differ from person to person according to how often you hit the gym. “If you regularly exercise, you’re likely to sweat more and earlier on during a workout compared to somebody who is less fit than you are,” says Dr. Luke Powles, Clinical Director for Bupa Health Clinics. To account for this, he recommends drinking water consistently throughout the day — before, during, and after your workout.

After all, proper hydration is essential to your overall health. “Around 60% of your body is made up of water, which is needed to help your body carry out all of its functions,” Dr. Powles explains. “It is especially important when you’re exercising, as you can lose up to two litres per hour just by sweating and breathing.”

Sweating is one of the most common causes of dehydration, which can be extremely dangerous and lead to heat injury or organ failure in serious cases. You should always up your fluid intake when sweating to ensure you are properly hydrated. “For gym junkies and muscle builders, drinking enough fluids is important for energising the body,” Taylor says, “as muscle cells that don't have enough hydration won't work as well and could see performance suffer.”

In short, it's important not to limit yourself in terms of drinking water, regardless of how much you sweat, especially while working out. Stick to the NHS's daily recommended amount of six to eight glasses of water a day — or more if you need it — to keep your body optimally hydrated and healthy. “Before working out, aim to drink at least a pint of water two to three hours before and another cup of water 20 to 30 minutes before you start exercising,” Taylor suggests. “While you are exercising, aim to drink a cup of water every 10 to 20 minutes and at least a cup 30 minutes after to replenish any fluids lost and cool yourself down.” If you end your workout covered in sweat, at least you’ll know you’re treating your body well.