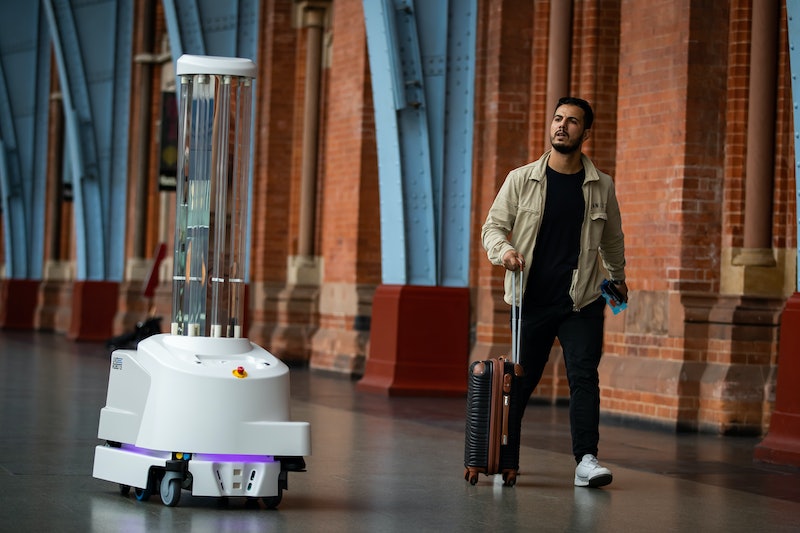 Wearing face masks and washing hands are ways many of us are using to protect ourselves and others from coronavirus, but what if there was another way to help stop the spread? Per the Guardian, electrical brand Beko is set to release their 'Hygiene Shield' range this December, which utilises UV to disinfect and kill bacteria on a variety of surfaces. But does UV kill coronavirus?

Depending on the type of UV used, it potentially can. According to the US Centers for Disease Control and Prevention (CDC), ultraviolet (UV) radiation "is a form of non-ionising radiation that is emitted by the sun and artificial sources." Non-ionising radiation is a form of energy that exists all around us and removes "electrons from atoms and molecules of materials that include air, water, and living tissue."

UV radiation is classified into three primary types depending on the measure of their wavelength. These include ultraviolet A (UVA), ultraviolet B (UVB) and ultraviolet C (UVC). Most of the UV radiation received on Earth is UVA as it has a long wavelength, whereas the shorter wavelengths of UVB and UVC are mostly absorbed by the ozone layer.

"UVC radiation from artificial sources (e.g. mercury lamps) and to a lesser degree solar radiation can rapidly deactivate COVID-19," an atmospheric physicist tells Bustle UK. As science publication Genetic Engineering & Biotechnology News writes in 2018, scientists "have known for decades that broad-spectrum UVC light [...] is highly effective at killing bacteria and viruses by destroying the molecular bonds that hold their DNA together." A lower dose of this type of UV called far-UVC "could kill microbes without damaging healthy tissue," the publication writes, which could then be used in public spaces like hospitals and airports. "UVC radiation has been used for disinfection purposes for a long time," the expert adds, highlighting that operating rooms in hospitals "may be disinfected in this way."

Autonomous robots using far-UVC have recently started appearing across the world courtesy of Danish company UVD Robots. Back in April, these robots were being used in Chinese hospitals to disinfect patient rooms and operating theatres by emitting a "mobile array" of powerful UVC radiation. These robots recently began operation in the UK at St Pancras Station, as well as on the London Underground and Heathrow Airport. Similar technology is being used at these destinations to disinfect moving handrails by continuously beaming a UVC light onto them.

In terms of UVC being used in household appliances, the atmospheric physicist stresses that it's "much more important to avoid direct contact with infected individuals and their exhaled respiratory droplets" as "touching contaminated surfaces is considered one of the least likely transmission paths." Although, they add that "you could argue that one life saved would be worth the expense and effort".

More like this
This Is When Netflix Is Going To Start Charging You For Sharing Passwords
By Darshita Goyal
11 Super Bowl Instagram Captions To Use On Game Day — Even If You Don’t Like Sports
By Alexis Morillo
Flip Phones Are Gen Z's Favorite New Nightlife Accessory
By Maria Santa Poggi
Everything You Need To Know About The Samsung Galaxy S23 Ultra’s New Camera
By Alexis Morillo
Get The Very Best Of Bustle/UK
Sign up for Bustle UK's twice-weekly newsletter, featuring the latest must-watch TV, moving personal stories, and expert advice on the hottest viral buys.