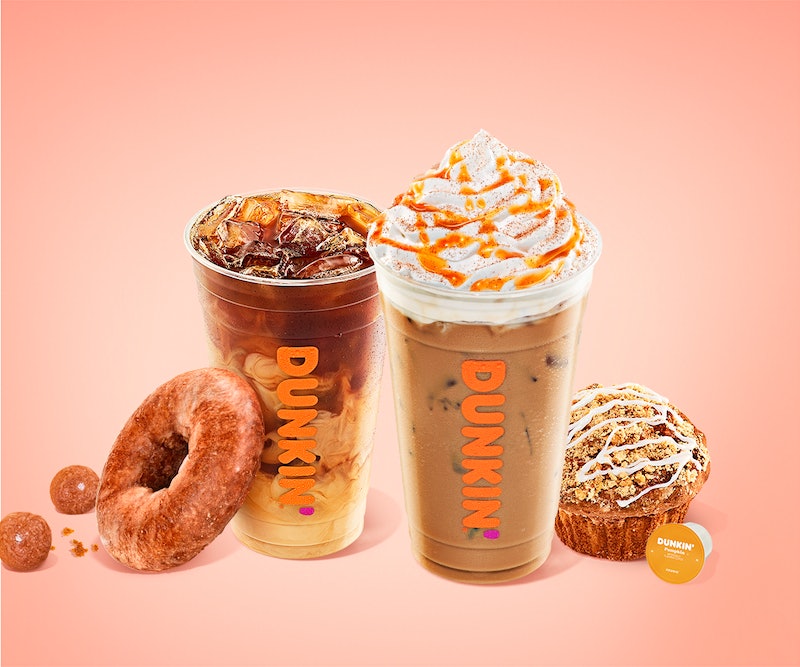 Praise the pumpkin spice gods: Pumpkin spice season is nigh. Just how nigh? Well, Dunkin’ is bringing back its pumpkin spice products earlier than ever this year. As of August 18, you can score all your Dunkin’ fall favorites, as well as some new classics. Prepare thine pumpkin spice bodies.

As announced last week, Dunkin’ is bringing back all their autumnal delights from pumpkin-flavored coffee drinks to Apple Cider Donuts to Pumpkin Munchkins. Soon you can start your day with seasonal treats like Dunkin’s Pumpkin Muffin, which comes topped with white icing and streusel crumbs. Plus, Dunkin’ is bringing back the most autumnal of autumnal treats: the Pumpkin Spice Latte.

Dunkin’s Signature Pumpkin Spice Latte, which debuted last summer, combines espresso with pumpkin and vanilla and comes topped with whipped cream, a caramel drizzle, and cinnamon sugar topping. You’ll be able to get it hot or iced, the latter of which is ideal for the not-quite-fall weather. If you’ve yet to give in to the PSL craze, now’s as good as time as ever. But wait, there’s even more good news: From now until September 14, you can enjoy a medium Pumpkin Cream Cold Brew or a medium Pumpkin Spice Signature Latte for only $3.

For a second year in a row, Dunkin’ beat out Starbucks in the battle of Who Can Pumpkin Spice The Soonest? Starbucks brought back its Pumpkin Spice Latte on August 24. Plus, you can enjoy Starbucks’ pumpkin spice products, which are already back on shelves.

In the mood for something chill? Say hello to Dunkin’s new Pumpkin Cream Cold Brew. When you take a sip, you’ll taste hints of cinnamon, clove, nutmeg, and pumpkin, of course. According to a press release from Dunkin’, the coffee is “steeped in cold water for 12 hours for an incredibly rich, ultra-smooth, full-bodied beverage.” And if you’re a Starbucks fan, you know that this drink sounds pretty similar to the Pumpkin Cream Cold Brew, but I’ll let you be the judge of your favorite.

What’s more is that Dunkin’s Pumpkin Spice K-cups and packaged coffee are now available at grocery stores across the country, as well as Dunkin’ restaurants. For the time being, you can join the rest of the internet in pumpkin spice anticipation.

This article was originally published on Aug. 13, 2020