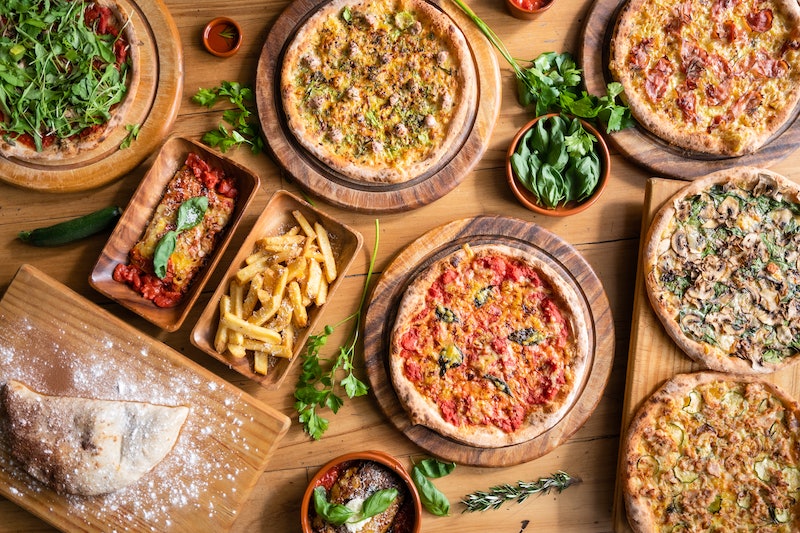 As we await the final numbers of the 2020 Presidential election, the results are in for one of Tuesday's biggest races: the food we stress-ate on election night. If food trends from election night are any indication, we turn to cocktails and comfort food in times of trouble. Democracy may disappoint us but booze and cheese will never let us down.

On election night 2016, MarketWatch reported significant spikes in sales from food delivery apps Grubhub, Caviar, and DoorDash with people ordering more alcohol and comfort food than a typical Tuesday night. When times are tough, we apparently turn to wine, cupcakes, pizza, and tacos.

This year was no different. On Tuesday, alcohol delivery app Drizly saw 67.66% more sales than the average of the previous four Tuesdays, per an emailed report shared with Bustle. Google Trends also reported record-high searches for “fries near me” and “liquor store near me.” If Tuesday found you drowning your sorrows in chips and dip, anxiously sipping cab sav, or frantically trying to find fries, rest assured you were far from alone.

Of the top five food searches from election night 2020, four were some form of comfort via fast food, according to Google Trends. Pizza took the top spot, with Chinese food, sushi, and Mexican food all falling within the top five trending food searches on Tuesday. Grubhub's most popular election night foods followed suit. Per a report Grubhub shared with Bustle, eight of the top 10 foods ordered on Election Day were cheesy, fried, or both.

French fries, chicken fingers, cheeseburgers, chicken quesadillas, and fried chicken sandwiches topped the list as the top five most-ordered foods on Tuesday. Mozzarella sticks, mac and cheese, buffalo wings, and nachos all made the list as well. However, in comparison to the prior Tuesday, there was one food that people ordered way more on DoorDash: Margherita flatbread. The food delivery app saw an 825% increase in orders for the pizza-adjacent food, according to a report shared with Bustle.

Grubhub's data further confirms the country's love of all things carby, cheesy, and comforting on election night. Five of the top 10 most popular Election Day orders were some form of pizza. Soppressata piccante pizza topped the list with a 202% increase in orders.

Across the U.S., people turned to regional favorites to get them through Tuesday. In the Midwest, biscuits and gravy and garlic cheese bread saw a significant spike in orders on DoorDash. The Northeast stuck to their favorites, ordering buffalo chicken pizza and bagels with cream cheese on the app. In true Southern style, a mix of sweet and savory topped the South's list of top orders with honey chicken biscuits and banana pudding seeing a significant spike. The only outlier appears to be the West where the item that saw a 307% increase in orders was...cucumber salad. Oh, California, Portland, et al, what cheese potato casserole hurt you?

We balanced out our cheesy, fried dinners with a hearty helping of dessert. On DoorDash, cinnamon rolls, apple pie, chocolate milkshakes, hot fudge sundaes, and strawberry milkshakes were among the top 20 most ordered foods on election night. On DoorDash, Nutella pizza claimed the number two most popular spot with a 192% increase in orders. However, it appears tiramisu was the sweet treat of choice for many with the Italian dessert being 181% more popular during dinner time compared to the rest of the day.

How did we manage to stay awake with the all stress, sweets, and savory food? Why with a hefty amount of caffeine, of course. During lunchtime on election Tuesday, GrubHub saw a 201% spike in cold brew orders and a 168% increase in chai lattes. Of course, coffee wasn't the primary beverage of choice for most on Tuesday...

If there's one thing that united us on Tuesday, it's that we were a country of wine moms. Over 42% of Drizly's sales on election night were for wine, which is a slight increase from an average Tuesday. Our collective wine weapon of choice? Any and all reds. This is slightly unsurprising since Americans tend to prefer red wine to white in general. But something about sipping red wine while watching CNN's John King break down election results in real-time just feels particularly appropriate for 2020.

According to Drizly's report, white wine was actually ordered less than usual. Rosé sales decreased as well and, though champagne and sparkling wine sales were up, it was only by a minuscule 0.61%. Apparently, we did not rosé all Election Day nor did we see cause for champagne celebrations.

To perhaps no one's surprise, Drizly's sales were up all across the country. However, our drink of choice varied depending on where we live. While alcohol sales in red states like Wyoming, Idaho, Missouri, and Tennessee were 33% higher than average, sales in blue states were up a whopping 75%. Hey, California, Oregon, Illinois, New York, Washington, Massachusetts, Rhode Island, Connecticut, New Jersey, Vermont, Maryland, and Washington D.C., how was that hangover Wednesday morning? And are you still feeling it as we close out the week?

Swing states like Florida, Ohio, and Pennsylvania also saw a 54% increase in Drizly sales. While battleground states and red states seemed to favor hard liquor, blue states were all about that wine. In fact, 45.34% of sales in blue states were for wine, making for a 1.37% increase in wine sales over the average Tuesday.

Regardless of the outcome of the 2020 election, one thing is for certain: wine and cheese were Tuesday night's clear winner.