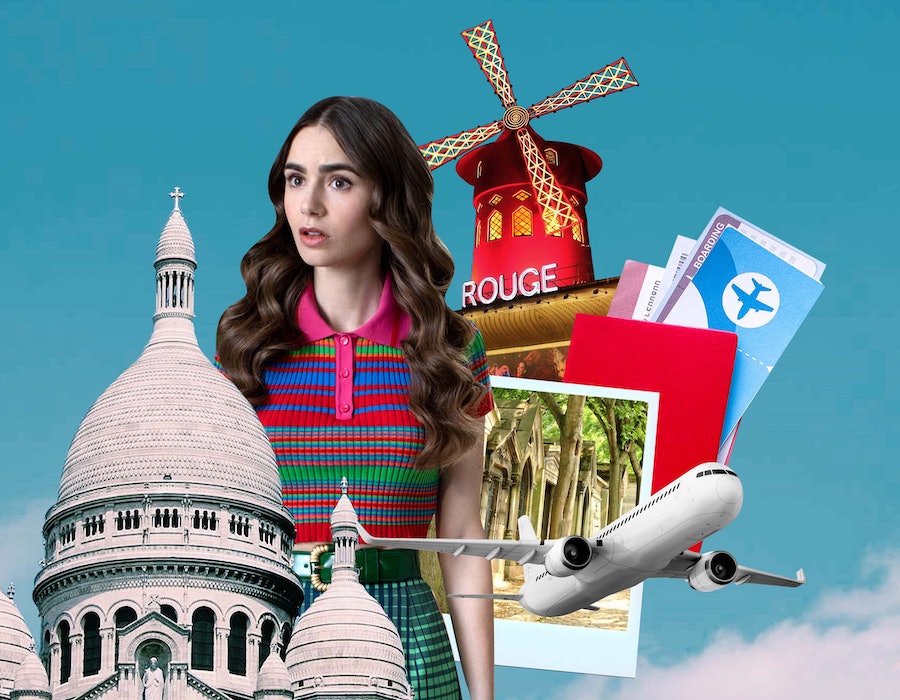 I couldn’t be more thrilled that Emily in Paris is back for Season 3 on Dec. 21. Maybe it’s because Paris is my absolute favorite city on this planet, or because Emily has an impeccable style, but the show makes me swoon! Hence, during my last trip to Paris, I leaned way into Emily’s lifestyle and visited all the famous (and not-so-famous) spots from the Emmy Award-nominated series. I also discovered some places that haven’t served as backdrops for the show — yet — but would totally make sense in Emily’s world. If you’re planning an Emily in Paris-inspired vacation, I have plenty of travel recommendations for you.

I had some Parisian friends show me around — my own versions of Mindy and Gabriel — and I’m passing along their tips to you. From Emily and Mindy’s trendy hangout spots to the shops Emily frequents during her lunch break, here’s where you can stay, what you can do, and where you can eat and drink while you’re in Paris.

Where To Stay During Your Emily In Paris-Inspired Trip

I was invited to stay at the hotel Marignan Champs-Elysées, centrally located in the Eighth Arrondissement, which is close to many filming locations from the show. (It’s a short walk to both Roxie, the restaurant and music venue where Mindy sang “Chandelier,” and Pont Alexandre III, the bridge Emily chose as the backdrop for her advertising shoot in Season 1.) I stayed in the Eiffel Luxury suite and my room had a spacious rooftop wooden terrace with views of the Eiffel Tower glittering all night long. Rooms start at $500 per night.

I also loved staying at the Canopy by Hilton Paris Trocadéro in the First Arrondissement. It’s a vibrant 123-room hotel featuring 1930s architecture and touches of modern Parisian elegance throughout. It partners with the nearby, award-winning Frédéric Lalos bakery to serve Emily’s favorite pains au chocolat as well as freshly-baked bread, croissants, and more. It’s near Place de Valois, the plaza where Emily works at the (fictional) marketing agency Savoir, as well as the garden Jardin du Palais Royal, where she first meets Mindy. Rooms start at $343 per night.

If you’re looking for more Alfie vibes than Emily vibes, check out the Pullman Paris Montparnasse hotel. While it’s not located in La Défense (his neighborhood doesn’t have much in the way of lodging), it’s a 15-minute drive away. Just like Alfie’s apartment, the modern skyscraper offers views of the river Seine and the entire city, including the tallest buildings in the business district. It’s also home to Skybar, the highest open-air rooftop bar and restaurant in Paris, with the most beautiful, unobstructed views of the Eiffel Tower, Panthéon, Montparnasse Tower, and the Luxembourg Gardens. It’s known for its Champagne cocktails, which remind me of the Champére Champagne launch that Emily worked on. Rooms start at $361 per night.

Emily In Paris-Inspired Things To Do

A Parisian guy I had met there (my version of Gabriel) took me to the neighborhood of Montmartre on a date, where Emily often hangs out with Mindy in front of the Sacré-Cœur, the famed Catholic church. The basilica is the highest point in Paris, which makes it perfect for watching the sunset. The area is surrounded by street painters and souvenir shops.

A quick walk from there will take you to the Moulin Rouge, the famous cabaret Emily and Mindy go to after prancing around the Sacré-Cœur. This iconic venue popularized the can-can. The bright red building has a big windmill on top because it’s meant to stand out and be seen from every direction. Watching the dancers perform in fabulous costumes with rhinestones and glitter is part of the true Parisian experience.

The next day, I went to Père Lachaise, which is both the city’s largest park and largest cemetery. The Gothic graves and mausoleums dating back to the 19th century make it a perfect spot for a scenic walk. Oscar Wilde and Jim Morrison are buried here. In Season 2, Emily goes here with her co-worker Luc for a birthday lunch.

For all the shopaholics out there, go to La Samaritaine, a luxury store on the banks of the river Seine. Emily goes there with her classmate Petra for a shopping spree in Season 2.

Where To Eat And Drink In Paris

Remember the restaurant where Mindy and her band closed out the Season 2 finale? That scene was shot at Shang Palace, the Michelin-starred Chinese restaurant. I dined there with my Parisian girlfriend (my version of Mindy). The restaurant is inside the Shangri-La Paris hotel and has the most exquisite chandeliers. Its specialty is char siu bao, a Cantonese-style bun filled with sweet barbecued pork. I loved the dumplings and the super crunchy shrimp roll.

While Gabriel’s restaurant Les Deux Compères is fictional, you can visit Les Parisiens, the neo-bistro housed inside the hotel Pavillon Faubourg Saint-Germain, for a similar experience. I had the veal risotto for lunch and the fish with seasonal vegetables for dinner.

Because the Four Seasons’ Grand-Hôtel du Cap-Ferrat in St. Tropez plays such a big role in Emily, Mindy, and Camille’s girls’ trip in Season 2, I went to the Four Seasons Hotel George V in Paris to get a taste of the brand’s elegance. Surrounded by stunning woodwork and sumptuous decor, I had a cocktail made with vodka, Champagne, hibiscus syrup, and elderflower foam. It was enough for me to soak up Emily’s “It Girl” lifestyle before returning to my regular life.

More like this
A Guide To All Of Zach Shallcross' 'Bachelor' Filming Locations
By Brad Witter
At 28, Debra Jo Rupp Was Living A Much Different '70s Show
By Grace Wehniainen
Savannah Guthrie Got Her First-Ever Tattoo With This Former Wild Child
By Suzanne Zuckerman
Flip Phones Are Gen Z's Favorite New Nightlife Accessory
By Maria Santa Poggi
Get Even More From Bustle — Sign Up For The Newsletter
From hair trends to relationship advice, our daily newsletter has everything you need to sound like a person who’s on TikTok, even if you aren’t.