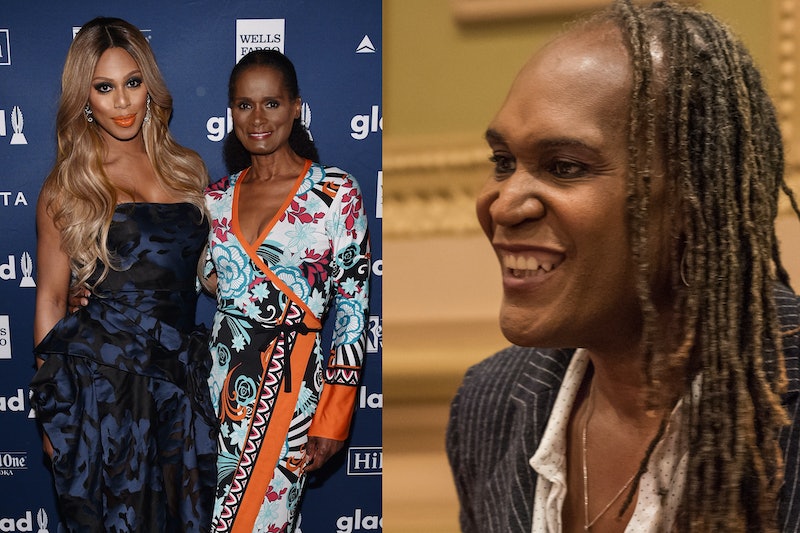 Throughout its history, the movement for transgender rights has often been criticized for centering white people in its leadership and values. As much of history has gone, the impact of Black people within the trans community has too often been erased or simply ignored. But so much of the culture created by Black trans women and femmes has influenced so much of what we know today: Take ball culture for example, created in 1860s Harlem by trans and femmes of color, which gave way to voguing — now a mainstream cultural touchstone, thanks to its appropriation by Madonna in the '80s. As trans visibility continues to grow, it’s important to combat the erasure of Black trans women and femmes through acknowledging our history — and recognize the ones who paved the way for us.

The history of Black trans women in this country goes back further than the current narrative would have you believe. Mary Jones is one of earliest known Black trans women in American history, according to Transas City, a website for the transgender community in the Kansas City area. She was a sex worker living in New York City in the 1830s, when she went on trial for pick-pocketing the wallets of her clients. During her interrogation, Jones was strip searched and it was discovered that she was assigned male at birth. She was exploited in the media as the “Man-Monster,” according to Hello Giggles, and sentenced to five years in prison for grand larceny and cross-dressing. After her release, Jones disappeared from recorded history.

What’s striking about Mary Jones’ situation is that, despite living in the early 1800s, her society’s attitude toward trans people was markedly similar to ours. Jones vocalized during her testimony that she has always been a woman and has always been accepted as such by the Black community, according to Transas City. As with trans women of color today, Jones’ tenacity proves the resilience that many Black trans women know far too well— and that we have been fighting for our existence in this country for at least the last three centuries.

Lucy Hicks Anderson expressed that same tenacity in the 1940s. She had been living as a transgender woman in Oxnard, California since the 1920s, according to Black Past, and by 1944 was married to her second husband, a soldier named Reuben Anderson. Upon discovery that Lucy was assigned male at birth, she was tried for perjury by the Ventura County district attorney, according to ESSENCE. During her trial, a coolly unapologetic Lucy Anderson stated amongst reporters, “I defy any doctor in the world to prove that I am not a woman. I have lived, dressed, acted just what I am, a woman.”

She was placed on probation for 10 years and subsequently arrested in 1946, after the federal government prosecuted her for fraud, due to receiving money from the military in the form of allotment checks for being an Army wife. Upon her release, Lucy was forced out of Oxnard by police and lived out the rest of her life in Los Angeles.

Lucy’s story serves as a reminder that the vilification of trans women is nothing new. In the 1970s, Tracey Norman knew far too well how transmisogynoir limits our agency — and fundamentally affects our right to live. Norman became the first known Black trans model after appearing on a box of Clairol hair dye, according to Refinery29. At the time, Norman had been pursuing her modeling career while keeping her transgender identity private. During a photoshoot, she was outed as a trans woman by her hairdresser’s assistant. Norman told The Cut she could no longer find work as a model after her identity was disclosed, though no one ever explicitly said why. Although visibility around the trans community has gained momentum since the ‘70s, workplace discrimination like Norman experienced remains a problem. It is one of the many reasons trans women of color turn to survival sex work to make livable wages. In 2015, Norman’s career was revitalized after The Cut wrote a biographical piece on her story, and she has since become the face of a new campaign with Clairol and has been on the cover of an issue of Harper's Bazaar.

I take inspiration from Tracey Norman — reminding myself that although the road is not easy, the best may be yet to come. It was that same kind of hope that led Laverne Cox to vocalize her advocacy for the Employment Non-Discrimination Act in 2013, which barred discrimination in the workplace on the basis of sexual orientation and gender identity. Cox is perhaps one of the most well-known trans advocates making history today. She was the first trans woman to be nominated for a Primetime Emmy, to be featured on a cover of TIME magazine, and in 2018, the first trans woman to be on the cover of Cosmopolitan. She created the documentary Free Cece, which told the story of an incarcerated Black trans woman who was arrested and convicted of second-degree manslaughter after killing a man in self-defense. Cox helped bring McDonald’s case into the public eye, and thus bringing further awareness on Black trans women in the prison system.

However, Cox is neither the first nor the last Black trans woman to help create a path where there was none before. In the political field, Andrea Jenkins became the first openly trans woman of color to be elected to a public office in the United States in 2017. The transgender community has always had hurdles and opposition from state legislatures in the past, and the election of Jenkins to the Minneapolis City Council goes down in history.

Visibility and safety in my community still has a long way to go. The year 2021 was considered the deadliest year on record for trans women, specifically trans women of color, and we still maintain a short life expectancy of only 35 years. But for me, these trans women of color are my works-cited. Although in the past, we have been removed from popular history, we are reclaiming what was rightfully ours. And like those that have come before us, we will continue to make strides time and time again.