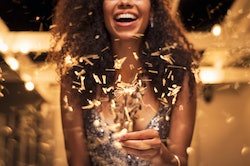 When you wake up on New Year's Day and reach for your phone to untangle the fog of the night before, you'll likely head straight to Instagram and catch up on all that you've missed. But while some people might assume the best time to post premium Instagram content is on New Year's Eve, the morning after is actually the prime time to post. The entire world is under the covers, squinting at their phone with one eye — just like you. So take advantage of this special moment in space and time and post all of your festive New Year's photos then. To streamline the process, here's a list of funny Instagram captions to use on New Year's Day so all you have to do is copy, paste, and send. It'll be much easier than getting out of bed the morning after New Year's Eve, I can guarantee that.

So, don't fret: the work has already been done for you. After scouring the depths of the internet, this list compiles the best New Year's Day-themed Instagram captions. They'll take your late-night pictures from the last moments of 2020 to the next level — whether you're watching the ball drop with the people in your pod or staying socially distanced and in your PJs. Enjoy:

"It wouldn't be New Year's if I didn't have regrets." — William Thomas

"May the New Year bring you courage to break your resolutions early! My own plan is to swear off every kind of virtue, so that I triumph even when I fall!" — Aleister Crowley

"He who breaks a resolution is a weakling; he who makes one is a fool." — F.M. Knowles

"My resolution? I never wanna make Holly cry again. Unless it's from laughing too hard. Or making love too beautifully." — Michael Scott, The Office

"If you focus on what you’ve left behind, you will never be able to see what lies ahead." — Ratatouille

"I made no resolutions for the New Year. The habit of making plans, of criticizing, sanctioning and molding my life, is too much of a daily event for me. ” — Anaïs Nin

"Make your mistakes next year and forever." — Neil Gaiman

"May all your troubles last as long as your New Year’s resolutions." — Joey Adams

"Never tell your resolution beforehand, or it's twice as onerous a duty." — John Selden

“This New Years I was going to make a resolution never to be late again, but I didn’t wake up until January 2nd.” — Melanie White

"New Year's Resolution: To tolerate fools more gladly, provided this does not encourage them to take up more of my time." — James Agate

"We better stick to the routine; we don't want to look stupid." — Friends

"From New Year's on the outlook brightens; good humor lost in a mood of failure returns. I resolve to stop complaining." — Leonard Bernstein

“Most people will passively do exactly what they did last year. Whatever you do, don’t let that person be you.” — Richie Norton

“Good resolutions are like babies crying in church. They should be carried out immediately.” — Charles M. Sheldon

"You’re as strong as your resolutions!” — Israelmore Ayivor

“New Year’s Day: Now is the accepted time to make your regular annual good resolutions. Next week you can begin paving hell with them as usual.” — Mark Twain

"I'm resolving to just wing it and see what happens." — Bill Watterson

"August is a gentle reminder for not doing a single thing from your new year resolution for seven months and not doing it for next five." —Crestless Wave

"This could be the start of something new." — High School Musical

"A New Year's resolution that I can never keep? To be able to make decisions." — Ashanti

"New Year's resolutions work like this: you think of something you enjoy doing and then resolve to stop doing it." — Charlie Brooker

“And now we welcome the New Year, full of things that have never been.” — Rainer Maria Rilke

"You know how I always dread the whole year? Well, this time I'm only going to dread one day at a time." — Charlie Brown

“If you decide to cut something out this year, try replacing it with something else to balance out the loss. If you stop drinking soda, for example, replace it with becoming more sedentary. You deserve it. You loved soda.”― Colin Nissan

"Good resolutions are simply checks that men draw on a bank where they have no account." — Oscar Wilde

“You only live once, but if you do it right, once is enough.” — Mae West

"Write it on your heart that every day is the best day in the year." — Ralph Waldo Emerson

"Some people swear there’s no beauty left in the world, no magic. Then, how do you explain the entire world coming together on one night to celebrate the hope of a new year?" — Claire Morgan, New Year's Eve

"Many years ago I resolved never to bother with New Year's resolutions and I've stuck with it ever since." — Dave Beard

"Cheers to a new year and another chance for us to get it right." — Oprah Winfrey

"We will encounter many defeats but we must not be defeated." — Maya Angelou

"Making resolutions is a cleansing ritual of self-assessment and repentance that demands personal honesty and, ultimately, reinforces humility. Breaking them is part of the cycle." — Eric Zorn

"Drop the last year into the silent limbo of the past. Let it go, for it was imperfect, and thank God that it can go." — Brooks Atkinson

This article was originally published on Dec. 31, 2018