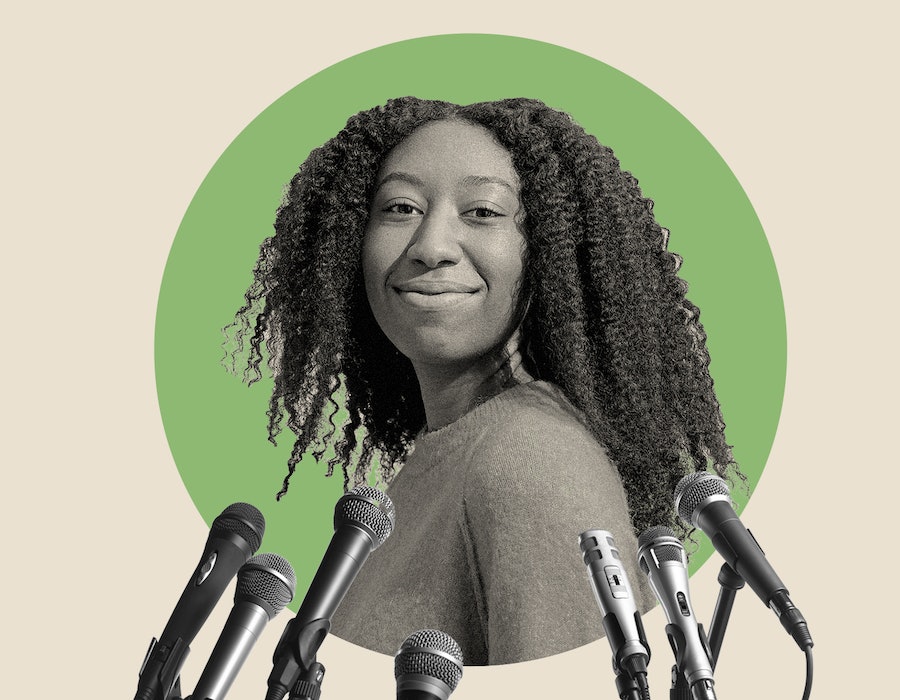 In Bustle’s Quick Question, we ask women leaders all about advice — from the best guidance they’ve ever gotten to what they're still figuring out. Here, Golde's CEO and co-founder Trinity Mouzon Wofford tells Bustle about starting a wellness brand, keeping up with consumer demand during a pandemic, and her advice for fellow Black women entrepreneurs.

Meet Trinity Mouzon Wofford, the only Black woman at the helm of a major wellness brand.

Since launching Golde, a superfood-based health and beauty brand, in 2017 with a single product (a Original Turmeric Latte Blend), Mouzon Wofford became the youngest Black woman to have a line at Sephora at age 25, partnered with retailers like Goop, and even received praise from Beyoncé and Kourtney Kardashian. In August 2020, the startup, which Mouzon Wofford co-founded with her now-fiancé Issey Kobori, appeared on The Today Show, spawning its biggest sales day ever. But that level of exposure came with its own set of challenges.

"Because we don't have millions of dollars in venture capital backing, the worst-case scenario for us would have been to over-invest in inventory and then find that the demand dissipated," Mouzon Wofford tells Bustle about her business booming in lockdown. "We found a happy medium where we significantly increased our production volume at a pace that would sell by the end of the year regardless."

Now, on a mission to make wellness more accessible and fun for the next generation of consumers, Mouzon Wofford is celebrating the brand's recent launch of “Super-Ades", a collection of supplement packets, in over 500 Target stores nationwide.

"When I visited Target, [Golde] was on the top shelf, and there's an image of my face next to the products; I think I yelped," she says.

Below, Mouzon Wofford shares the importance of trusting your gut instincts, her favorite self-care rituals, and why seizing opportunities is the key to success.

Take me back to when you launched Golde. How did you know there was a market for it, and what pushed you to go for it?

TMW: I was raised by a single parent with a severe autoimmune disease. When I was a teenager, my mom started seeing a holistically-minded doctor, and she saw an incredible improvement in her symptoms. It was the first time that I saw the power of holistic health and wellness.

After graduating high school, I went to NYU for pre-med with the intention of practicing holistic health care. All was well until I found out that my mom had to stop seeing her doctor because she couldn’t afford it anymore. That forced me to pause and reconsider what it was that I wanted to do within wellness, and how accessibility played into that.

What’s surprised you the most about your entrepreneurial journey?

TMW: I’ve been the most pleasantly surprised by how true my gut instincts are. I started Golde at age 23. I didn’t have a lot of work experience, let alone entrepreneurial experience. But I was quickly thrown into this world where a lot of people seemed to know better than I did, because they had X, Y, and Z experiences. I’ve had moments where I was looking for someone to tell me what the solution was, but I’ve always come back to the conclusion that the best thing I can do is listen to my gut. Anytime I can think back to when I didn't listen to my gut, it wasn’t the right decision.

What's an example of time where you didn't listen to your gut?

TMW: Early on, we were targeted by investors who pushed us to raise as much money as we possibly could as quickly as possible. I started going down that path, but it was too early. We didn't know enough about the business, our customers, or where we wanted to take the brand for the next 10 years. It can be risky to take on that level of capital before you've had the opportunity to fully test your concept in the market. We ended up bootstrapping the company for over three years, which was the right move, but listening to those voices in the first place was a waste of time.

"Anytime I can think back to when I didn't listen to my gut, it wasn’t the right decision."

What’s your favorite way to turn off your brain and recharge?

TMW: I put my phone away after dinner. Even if a friend texts me, I'm not going to see it. It’s important to create those moments when you aren’t glued to technology, because it’s creating strange patterns in our brains where we’re always feeling anxious, we’re always checking something, and it’s too reactionary. Most things can wait until the morning.

I also recently got hooked on This Farming Life, a reality show that follows farmers in the Scottish Highlands. It’s so peaceful and soothing.

TMW: Know when you're lucky; I’ve connected all these dots of the times when I noticed an opportunity and jumped on it. In the early days of Golde, Issey and I were ready to quit our full-time jobs, but we couldn't afford to keep paying our Brooklyn rent. When my mom was about to sell her house in upstate New York, I asked if we could move in and build our business. So we lived there rent free for a few months and got the business off the ground. Moving back home isn’t something that many folks would consider an asset, but you have to find those little cracks in the sidewalk that you can grow through.

TMW: Be true to yourself and your value system, and you will not be led astray. Having that transparency and honesty not only with your customers and your team but with yourself is critical as a guiding light.