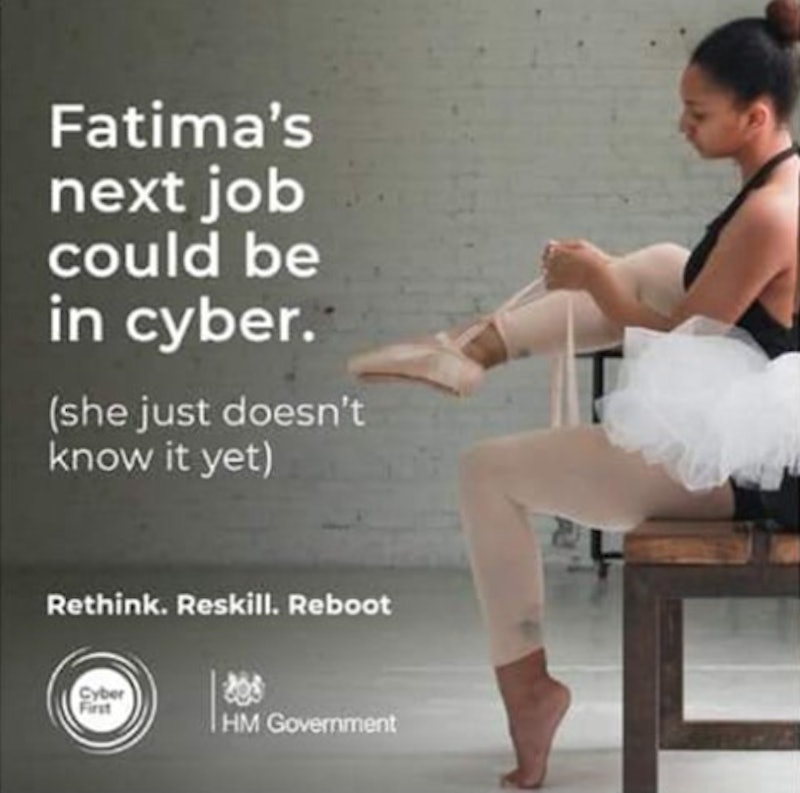 "This has to be a joke. Right?" tweeted celebrated choreographer, Sir Matthew Bourne, on Oct.12, alongside the UK government's now infamous 'Rethink. Reskill. Reboot' advert. The picture sees a young dancer tying her ballet shoes, alongside the words: 'Fatima's next job could be in cyber. (She just doesn't know it yet)'.

The image of 'Fatima' sent the internet into a tailspin, with countless reactions and memes featuring various political figures online. Bourne joined thousands of artists and creatives across the UK expressing outrage in light of the campaign, and at the general lack of respect shown to the arts industry by the Tory government – particularly highlighted by the lack of support during the pandemic.

The ad seems like a tone-deaf release given the backlash against Rishi Sunak's recent comments in an interview with ITV – it was initially reported that Sunak suggested those in music and the creative industries should retrain, although this has since been clarified to reflect the fact that he said those in "all walks of life" would have to adapt.

However, what's been less publicised is that the advert was actually part of a 2019 government campaign to encourage more young people into cyber security.

Nevertheless, the creative community feel the fact that the advert pre-dates the pandemic only serves to highlight this has been a long-held attitude towards the arts by the government. It certainly fits the current mood, which could be why it has resurfaced.

As Alistair Coleman from the BBC's anti-disinformation team comments: "In the context of the difficulties facing the arts during the COVID-19 pandemic, it's a sensitive subject. The use of a ballet dancer – seen through the narrow focus of social media – seems dreadfully timed."

Social media users were quick off the mark when the advert resurfaced. It prompted many humorous responses from creatives, alongside the necessary outrage (in true creative style). Singer Joy Crookes, for example, photoshopped herself into the ad, posting the Instagram caption: "Rishi - You’re not the first uncle I’ve fought to become a musician. Sit down."

Designer and illustrator Sean Coleman also highlighted that without the help of creatives, the government campaign wouldn't have existed in the first place:

Who Is 'Fatima' In The Advert?

In will come as little surprise that 'Fatima' isn't the real name of the dancer pictured in the advert. In fact, the original image was posted to Instagram in July 2017, by Atlanta-based photographer Krys Alex, featuring dancers Desire'e Kelley and Tasha Williams in Motion Dance Studio in Atlanta, Georgia.

The BBC reports that the photo was available on stock image site Unsplash, where pictures can be downloaded for free for commercial and non-commercial use. However, Alex says in a Youtube statement: "Some people questioned if I knew and if I approved the use of my work. If I'd have know that this was going to be used in the way it was, I would have never agreed to it."

On first hearing about it in the news this week, she says: "I woke up Monday morning to a bunch of emails and tags, and I really felt devastated. I immediately thought of Desire'e and how her face was just plastered all over social media and the internet, different news articles, and memes were created, and she had no clue. All of that really hurt me."

Following the backlash, the UK government was quick to distance itself from the campaign. On Twitter, Culture Secretary Oliver Dowden admitted the campaign was "crass". He added: "I want to save jobs in the arts which is why we are investing £1.57bn."

Per The Guardian, the government has recently announced that more than 1,300 arts organisations across England – including theatres and music venues, such as Manchester's Warehouse Project and London's Corsica Studios – will receive a £257 million share of government money to help them survive the next six months.

More like this
Women Around The World Are Cutting Their Hair In Solidarity With Mahsa Amini
By Darshita Goyal
The Queen’s Cause Of Death May Not Be Formally Announced
By Shahed Ezaydi and Catharina Cheung
Will Archie & Lilibet Attend The Queen's Funeral?
By Sam Ramsden
Chris Kaba's Family Continue Fight For Justice After Viewing Police Bodycam Footage
By Sophie McEvoy
Get The Very Best Of Bustle/UK