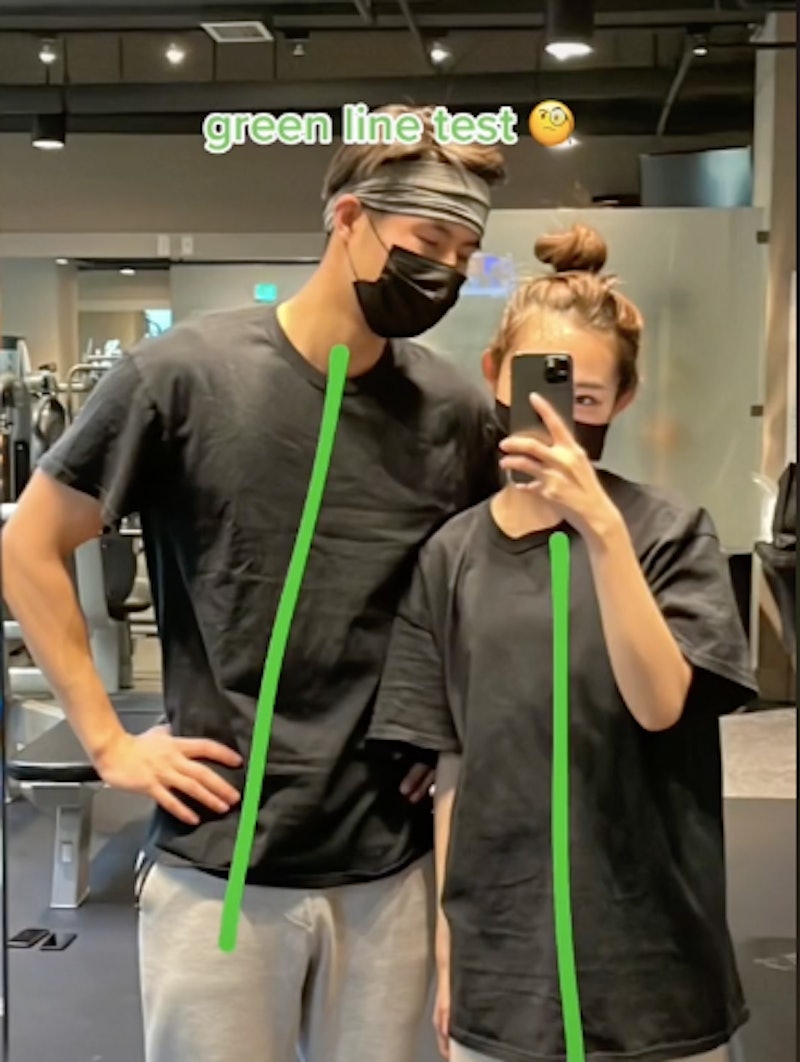 When you’re in an intimate conversation with someone and they lean in closely, what does that signal to you? Typically, you might think that they’re listening intentionally and being attentive. When you’re on a date with someone new, and they make prolonged eye contact and scoot closer to you in their seat, you might be inclined to see that as a sign that they’re really into you and wanting to engage physically, whether that be grabbing your hand or going in for a kiss. Body language is a helpful tool for non-verbal communication, and according to the “green line test” trend currently circulating on social media, many people would agree.

According to some corners of the internet, there are some telltale signs that a woman is the dominant partner in a heterosexual relationship, and it all comes down to body language. While you’re scrolling through your FYP on TikTok, you may come across videos about the controversial green line test and different examples of how it can be applied to couples. The test uses a picture of a couple, with a green line drawn down the center of each person’s body. Based on their posture or pose, the green lines are said to represent the “role” of each partner in the relationship. If both are straight and vertical lines, it’s an equal partnership. If one is straight with the other line curved into it (as in this video of Kim Kardashian and Pete Davidson), then one partner is supposedly “drawing in” their other half, and therefore the “alpha” in the relationship.

With over 104 million current views, it’s no surprise that the trend may pop up on your feed. The main source for these TikToks is user @jackmacbarstool, who creates videos using the green line test on celebrity couples. According to some body language experts, the popularity of the green line test makes sense. Janine Driver, body language expert and president of The Body Language Institute, says that the difference between energies in men and women can be visually obvious. “I like to compare masculine energy to a period,” Driver tells Bustle. It’s definitive. It can fit in a box. It’s solving a problem. Feminine energy is a squiggly line like a question mark. It can’t be contained.”

If you’re curious to learn more about the green line test, here is everything you need to know — including what body language experts really think about the trend.

Where Did The Green Line Test Come From?

Unlike many viral trends, dance routines, or jokes on TikTok, the green line test originated elsewhere. According to a video from @jackmacbarstool, the test was created by Twitter user @alpharivelino, who has 118,000 followers. Although they don’t appear to have any credentials when it comes to body language expertise, the person behind this Twitter account created the green line test as a way to demonstrate which partner in a couple was the “alpha.” While there isn’t much known about the user themself, there has been plenty of backlash against their tweets. In one tweet, @alpharivelino explains, “For a couple to pass the green line love test, the man should stand up straight and his woman should lean into him.”

What Do Body Language Experts Say About The Green Line Test?

Although the green line test has become a hot topic online, and some people seem to believe that the test reveals true imbalances of power in a relationship, and whether the man in a heterosexual relationship is truly “in charge,” others discount the test’s legitimacy altogether. But what do body language experts have to say about the trend?

Based on the fact that the test was created by an anonymous Twitter account, it makes sense that some experts would be quick to write it off. Joe Navarro, a former FBI agent turned body language expert, falls under that category. "The green line body language test is rubbish,” he tells Bustle. “There is no science to support it, and has no legitimacy in logic, as humans are highly complex in how they display emotions bearing in mind that non-verbals are fluid and contextual.” He adds that the angle in which someone is leaning “is not indicative of relational status nor hierarchy.” In general, Navarro also points out that using photos to detect body language isn’t the best indicator since we don’t have the full context of the situation.

Other experts, however, changed their tune after some consideration about the green line test. Driver’s curiosity was initially piqued by the test, and as she tells Bustle, her first instinct was to disprove its logic, but that quickly changed. “Every couple I put to the test ended up proving the test accurate,” she says, adding that she tested George Clooney and Amal, George H. Bush and Barbara, Tom Hanks and Rita Wilson, Matt Damon and Luciana Barroso, along with other pairs that have long marriages. “I doubt it’s 100% accurate, but even if you had an 80% chance of winning the lottery, why [wouldn’t] you buy a scratch ticket?”

While there are plenty of conflicting opinions on the test, there’s no denying that it has started a major conversation around gender roles and dominance. Whether you believe the logic or think it’s “rubbish,” as Navarro says, it might be fun to give it a try with your own partner and see the patterns in your own body language.

More like this
Where Did The TikTok Term “Sneaky Link” Come From?
By Courtney Young
On TikTok, Miley Cyrus’ “Malibu” Is The Soundtrack Of Growth
By Courtney Young
TikTok’s Tiny Bee Trend Wants You To Admit Your Worst Decisions
By Courtney Young
18 Games Like Wordle To Play Online
By Kaitlyn Wylde and Emma Carey
Get Even More From Bustle — Sign Up For The Newsletter