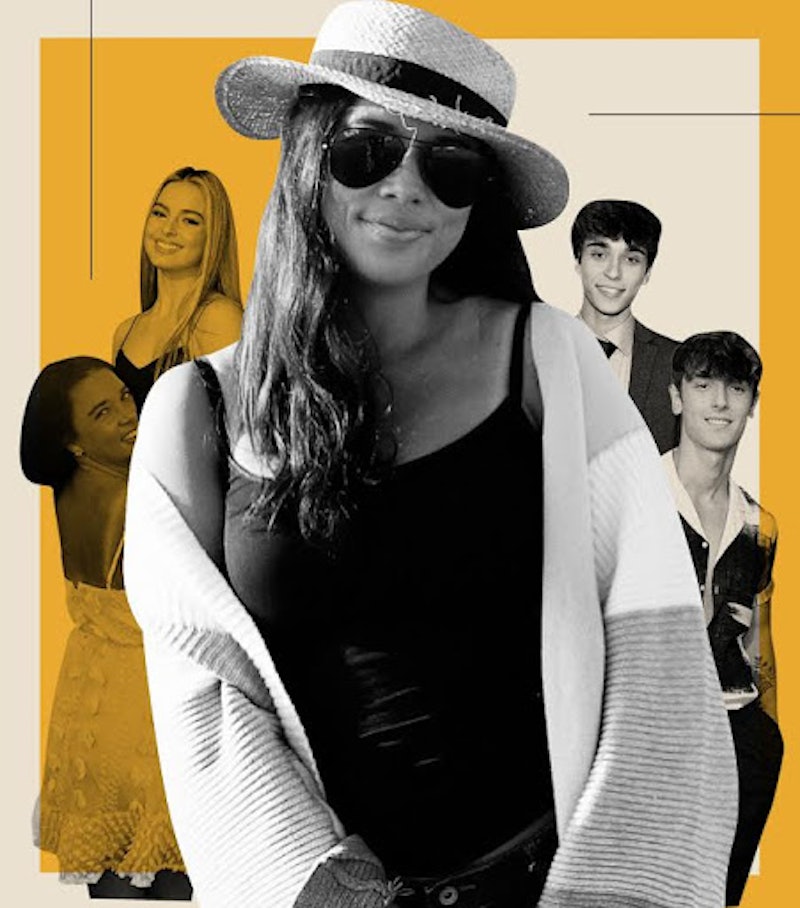 In her hometown of San Diego, California, Hannah Kosh, 26, does publicity for professional sports teams. But after turning to TikTok in a state of quarantine-inspired boredom, she found herself fascinated with popular teen creators on her For You Page. After posting a video speculating about #straightTikTok (aka predominantly heterosexual content) drama, she became an overnight sensation. Here, Kosh talks about how she got started, her first viral video and why 20-somethings are so obsessed with teen drama, as told to Kaitlyn Wylde.

When the pandemic began, our team's season was halted and we transitioned to a work-from-home model. It was then that we realized everyone was turning to TikTok. Our organization talked about researching the app for potential opportunities, so I downloaded it and began exploring. At first, my For You page was mostly content from the collaboration houses, like Hype and Sway. My first impression of them was that the members were so young and attractive — I was fascinated.

Before starting my own account, I could talk to some of my friends about the drama I was witnessing. They were being fed the same content, but couldn't get invested in the drama. I was dying to know what was happening when Jaden and Josh said they were leaving The Sway House, so I decided to turn to TikTok and ask other people on the app for answers.

In my first commentary video, I asked if Jaden and Josh left the collaboration house to go to rehab (after they were arrested on drug charges). I added a few relevant hashtags but had very low expectations. At first, a couple of people commented asking why I cared — one person told me I look 40 and should not be concerned with teen drama. But by the end of the day, the video had blown up [it now has over 350,000 views]. Jaden's mom even commented and cleared up the rumor. Most importantly, I got my answer. (No.)

People started messaging me, asking for updates and requesting new videos explaining developing drama. When users began sending me information, tagging me in TikTok Room posts, alerting me to tweets and Instagram activity that pertains to the people in the collaboration houses, I realized: oh gosh, this actually could be something. All of a sudden, there were a bunch of 20-, 30-, 40-year-olds messaging me, "thank you for being the one to talk about this stuff," and "thank you for making a community for the people who have the same questions and don't feel comfortable talking about it."

I didn't truly believe that my commentary could be an ongoing thing until all of the drama went down with Charli D'Amelio and Chase Hudson. That was crazy — it was the first time I hit a million views. Someone commented, "You're the next Perez Hilton. No one else has this info." When Charli D'Amelio's mom, Heidi, started following me and commenting on my videos, it gave me legitimacy. I was no longer a complete rando talking about 16-year-olds.

Now that I have a following, I do feel a little sense of responsibility to be as accurate and unbiased as possible. I get most of my intel from social media — people message me, and I investigate and do research to see what others are saying. I emphasize that I have no idea what's going on and that I'm just speculating so that people don't get mad if I'm wrong.

I think it's a blessing that people trust me and find my videos funny and don't think the community I've built is weird. I mean, some trolls will ask, "What is grandma talking about?" but I'm OK with it. I've been able to create a safe space for other older millennials, a place where we don't have to feel weird or embarrassed about being invested in teen drama. Everyone's asking the same questions and wants to stay up-to-date.

The concept of collaboration houses is what's most interesting to me. You have these teenagers living together in mansions in Los Angeles, getting paid to post on TikTok. Then you have the separation of the different houses and the cliques that form within them. When you pay attention to the creators individually, you see that they all have their own thing going on, but come together in a way that's reminiscent of One Direction or the Jonas Brothers.

You can tell a lot about influencers by the way they act on social media. Sign number one that something is up? An unfollow. That's making a statement. When they do something like that on social media, they know we're watching. It reminds me of my own high school experience, and the kinds of shows I like to watch on TV — I don't think our obsession with teen drama is any different than our obsession with Keeping Up With The Kardashians or the Real Housewives. But on TikTok, we get to see the drama uncut and unfiltered every day. We don’t have to wait to watch a new episode every week. It’s basically reality TV, but at our fingertips.

I don't know what the future holds for me. People have been asking me to start a YouTube channel or a podcast, with some even suggesting I become a host on Entertainment Tonight. It's funny — when I was younger, I really looked up to Giuliana Rancic. Now, everything feels possible. In the beginning, I was asking the community for answers. Now they're the ones asking me questions.

More like this
Bachelor Zach’s “Dream Job” Has Nothing To Do With His Work In The Tech Industry
By Brad Witter
Ashamed Of Your Screen Time Stats? Here's How To Change That
By Alexis Morillo
How To Turn Off TikTok Profile Views So You Can Stalk Other Accounts In Secret
By Alexis Morillo
19 Instagram Captions For Celebrating Black History Month
By Ayana Lage
Get Even More From Bustle — Sign Up For The Newsletter
From hair trends to relationship advice, our daily newsletter has everything you need to sound like a person who’s on TikTok, even if you aren’t.