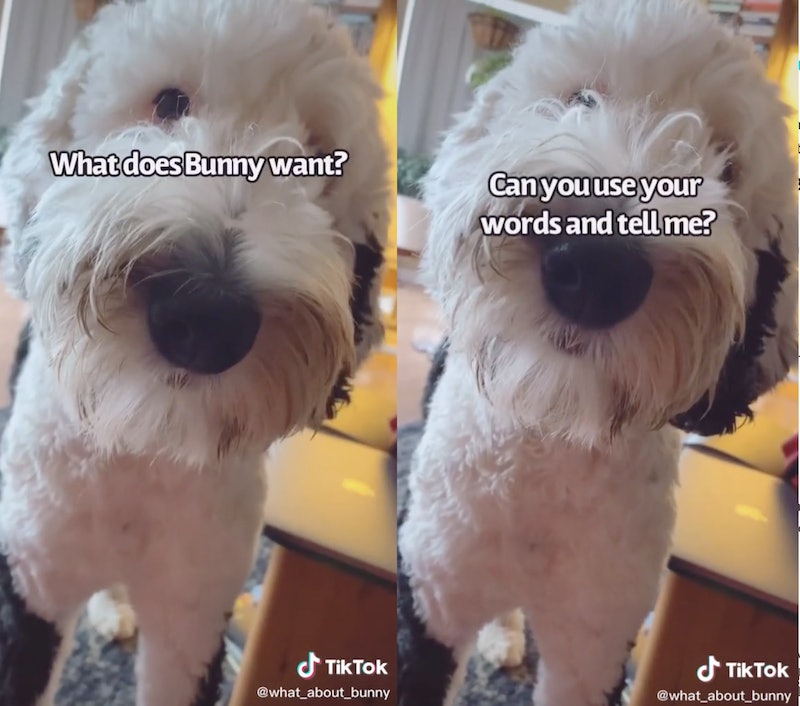 If you're an avid TikToker, you've likely come across Bunny, the talking dog, on your For You Page. The viral sensation has drawn in over 5 million followers who watch the sheepadoodle simulate conversations with her human with a mix of awe and disbelief. If you're not familiar, Bunny doesn't actually "speak." Rather, she appears to intentionally engage with a pad of buttons that have pre-recorded audio commands from her owner, like "walk" or "park" or "I love you, mom." While Bunny isn't vocalizing like a human, she does appear to be communicating, blowing the minds of everyone on the internet — and of course, raising eyebrows from skeptics.

Though it might seem like a prop for TikTok, the communication system that Bunny uses isn't exactly new. Alexis Devine, Bunny's human, first came across the soundboard two years ago, when she learned about speech-language pathologist Christina Hunger's work. Using a similar device, Hunger was able to teach her pup Stella to communicate. Devine knew she wanted to experiment with this form of communication even before Bunny came into her life.

"I felt like there's no reason to bring a creature into your home if your plan isn't to build and extraordinary relationship with them," Devine tells Bustle.

How Bunny The Dog Learned To "Talk"

When Devine brought Bunny home in the summer of 2019, she was interested in being able to bridge the gap between human and canine understanding and give Bunny tools to express pain, which she thought could lead to better veterinary care.

The system started with a simple "outside" button by the door. Devine planned to see how Bunny naturally interacted with the button, and whether Bunny could draw the conclusion that pressing the button meant she could go outside. If the pup wasn't interested in the button, Devine wouldn't force it. But when Bunny started to use the button regularly, Devine knew the soundboard had potential. One by one, Bunny learned the buttons by Devine responding to her commands: if Bunny tapped the "water" button, for example, Devine would fill her water bowl. "It's a mutually beneficial system," Devine says. "She knows using the buttons pleases me — she knows if she requests a walk and I hear her, she is pleased."

Bunny has since been enrolled in an open research study at the Comparative Cognition Lab at the University of California, San Diego, led by Federico Rossano and Leo Trottier, which aims to find out if dogs are actually communicating using these soundboards, and if so, how.

"People are skeptical of what's going on, and so am I," Devine says, acknowledging the critics who often leave comments on her videos deeming them fake or misleading. Devine explains that right now, there's no evidence to say that what's happening with Bunny is anything more than operant conditioning, a behavior pattern that's focused on being rewarded rather than cognitively understanding what's occurring. That means Bunny might press the "I love you mom" button because that leads to a warm reaction from mom, not because she's actively expressing love.

Still, Rossano and Trottier are just as awed as the internet is in Bunny's swift adoption of the communication system. While the team is working with hundreds of dogs, Bunny's performance stands out as exemplary, Trottier tells Bustle. And though he is open to the idea that the Sheepadoodle breed might be the perfect mix of people-pleasing (Sheep Dog) and clever (Poodle), he attributes Bunny's success to Devine's commitment to the work.

How Bunny The Dog's Soundboard Works

While the open study doesn't yet have enough information to draw any definitive conclusions, the working theory is that dogs are able to learn the location of the buttons and their meanings. "Dogs can learn up to 1,000 words, this is proven," Trottier says. Dogs already communicate basic command words, like "walk" or "water" when they stand near their leash or gesture to their water bowl, Trottier says. What's different, and still TBD, is whether or not dogs can string together more complex phrasing, such as "beach walk tomorrow?" or "Come mom, ouch," and actually mean what they say.

"We know animals can communicate basically about things in their immediate environment, and while we don't know if they can do more sophisticated things, there is suggested evidence that the linguistic abilities are way beyond what we thought," Trottier says. "The more language resources dogs have, the more elevated their thinking process can become," he adds.

But is it talking? "This dog is communicating with her owners," says Erin Askeland, C.B.C.C.-KA, C.P.D.T.-KA, an animal health and behavior consultant at Camp Bow Wow. But that's kind of normal. "To be clear, communication is part of training and living with a dog — they don’t inherently know what words mean until we attach words to behavior, actions, or items and that is done through conditioning," Askeland, who is unaffiliated with the study but who has observed Bunny's viral TikTok videos, says.

Can Any Dog Learn To "Talk"?

If you're watching these videos and wondering if your dog is too old to learn a new trick, you might be inspired to know the researchers involved in this study don't rule out any candidates.

"With respect to cognition, anything is possible," Trottier says. "It depends how much work you can put in — younger dogs who haven't formed their ideas about how to interact with the world are way easier to train."

While it is impressive to see this kind of behavior, Askeland says teaching a dog to communicate complex concepts is not a simple task and probably not for every pet owner. Buttons or not, Askeland says it's the duty of a dog owner to set up some kind of communication. "Dogs already communicate with us. It’s up to us to figure out what they are saying, and this is one other way a dog can do so."

Though Trottier expects to see some trends in breeds as the study progresses, he's confident that any dog that's young, or interested in pleasing its owner, is a good candidate for the practice.

Devine says that her ability to communicate more deeply with Bunny has enhanced their bond. "It's like no other connection I've ever had," she says. "She teaches me so much about kindness and and listening better to other people, giving them space to respond, and being kinder to myself."