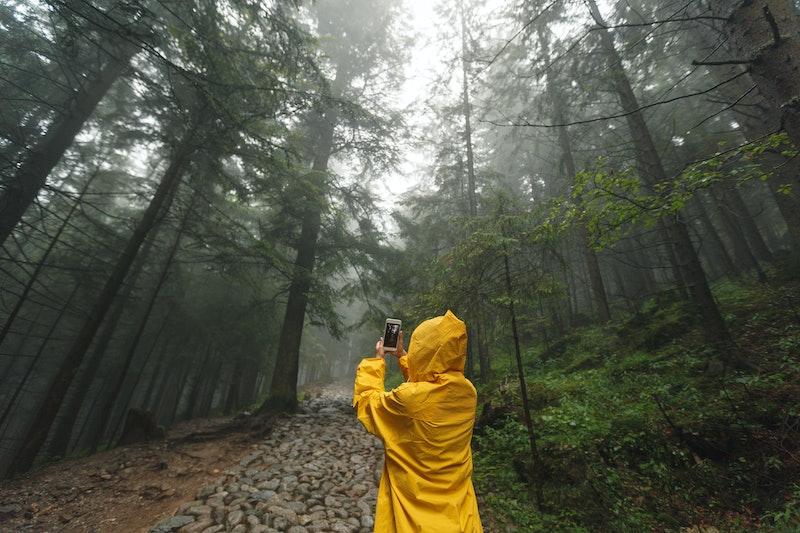 While some teenagers are building virtual villages on Animal Crossing, others are making chilling discoveries IRL with Randonautica and posting about it on TikTok.

Randonautica is an app that sends you on a random adventure to explore the world around you. All you have to do is share your location, set an intention, and follow directions to a random point that the app generates for you. There, the theory is, you will find something relevant to your intention.

An intention, or your intent, is what you are looking to see or find. You are able to type whatever you may be searching for in the moment. For example, if you type “water,” you may end up like the city-dwellers who did just that, and find a make-do waterfall in the big city. Whatever it is you may be searching for, Randonautica will lead you to it. (Or something along the lines of it.) In the case of TikTok users, these jaunts can lead to anything from realizations about their love lives to unearthing crime scenes. But mostly, Randonautica explorations are short walks or drives to completely uninteresting places that inspire you to think differently.

The app, which was programmed with both quantum physics and spirituality in mind, has had over one million downloads in a three-month period, according to the creators. Though the app came out in early 2020, it already had a built-in audience of "Randonauts," aka Reddit-ers who were generating their own random points to go on these adventures and discuss them. "Before the app, the community was smaller and generally made up of curiosity seekers," Joshua Lengfelder, co-founder of the app, tells Bustle.

It wasn't until the beginning of June 2020, when Emma Chamberlain posted her Randonaut experience on YouTube, that it moved into For You Page territory. Now people who might otherwise be outside of the algorithm are being fed adventure-seeking Randonaut videos with spooky soundtracks and a lot of Blair Witch-style cinematography.

The app is so random, the second, third, fourth, and fifth time I tried to find a location to explore, I was sent to private properties, roads I could not access, and areas too wooded to find. The app warns users about using discretion when following random points and to avoid trespassing or entering locations that look dangerous. "It’s comparable to dropping a piece of sand from the sky on a map — the app has no control over the coordinates it shares with the user," Lengfelder explains. The idea is that by bringing you to these points, you'll step outside of your comfort zone, inviting new possibilities for your day.

Not sure what quantum physics has to do with it? "Randonauting is heavily inspired by chaos theory and Guy Debord's Theory of the Derive," Lengfelder tells Bustle. According to Smitha Vishveshwara, Ph.D, a professor in the department of physics, at University of Illinois at Urbana-Champaign, this theory can be best understood by first thinking about a swing. "Give a child on a swing a gentle initial push, and you know how the pendulum motion would go. But if you had something even slightly more complicated, like pushing too hard or having two pivotal points (instead of just one at the top), the system would go haywire," she explains.

Essentially, a small change can set off a series of unpredictable effects. In Randonautica, visiting a place that you wouldn't otherwise visit could lead to a series of events or realizations that break the matrix of your regularly scheduled programming.

The app provides you with three different types of locations to choose from, each randomly generated by the app. The first type of location is an "attractor" location. This means that it's a dense area that has lots of clusters of quantum points. (The term "quantum point" describes random numbers that have been converted into a coordinate location somewhere in your vicinity.) This, theoretically, could mean that the area has a lot of energy. A "void" location is essentially the opposite — an area of low density quantum point distribution. An "anomaly" is the third type of location, is considered the strongest kind of location to visit, especially if you have a strong intention and are on a mission to find specific answers.

On my tenth attempt at Randonauting, using a "attraction" location, I ended up in the parking lot of a nature reserve, near a white truck. For the sake of the game, I focused on the truck, and followed a series of mental bread crumbs that lead me to a memory of an old friend who had a similar car, who I later reached out to. Reconnecting with that friend was not something I would have done on this day otherwise. Though not quite paranormal, it did feel special and different to be lead on the path to reconnecting with this friend.

According to Vishveshwara, "When you are truly observing, [the mind] can experience wonderful, strange feelings in and of themselves." In the game, and in life, Vishveshwara says that doing random things makes life more exciting, "giving rise to much richer possibilities than in something pre-programmed and more engaging for the player to be taking an active role."

Another philosophical theme woven into the app experience is the Baader-Meinhof phenomenon. This describes the sensation of seeing things you just learned about or talked about. Long before eavesdropping Instagram ads, Stanford linguistics professor Arnold Zwicky coined the term to describe the unconscious search that starts once something enters our conscious. In the world of Randonauting, it plays a part in the process on setting an intention and assigning meaning to random occurrences, events, and items. Confirmation bias might play a similar role. Part of the app's success could be contributed to the fact that people go to the locations already subconsciously knowing what answer they're looking for, and so they find evidence that supports it.

As for why the app became so popular on TikTok, Instagram, and YouTube, during the midst of quarantine, creator Lengfelder says that sharing the story is part of the experience. It's also part of why the app keeps getting more popular, without any formal marketing. "It's sort of a perfect storm of easy tools to create little vignettes and an algorithm that boosts the memetic nature of the phenomena," Lengfelder explains. "People see an interesting adventure, decide to try the app themselves, post a TikTok of what they find, and Randonautica ends up self-propagating."