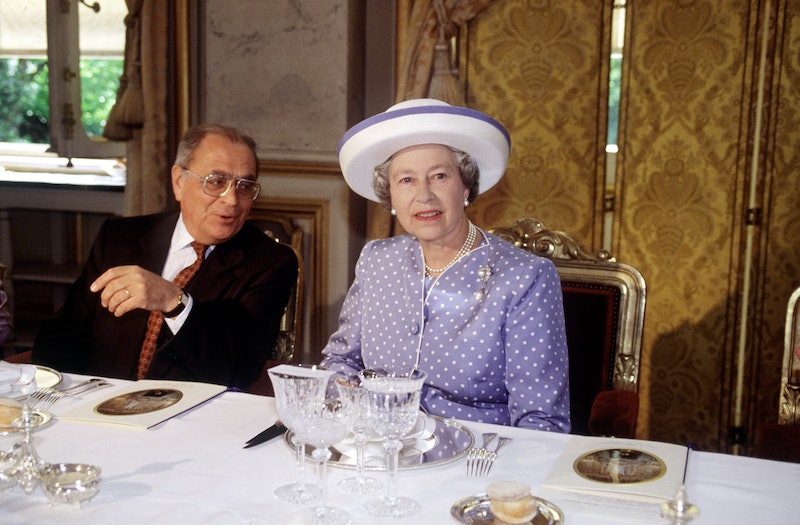 Burgers are one of life's greatest pleasures. Whether you eat meat, are veggie, or avoid animal products all together, there's a patty for you. Everyone loves them – even the Queen. However, a reliable source has revealed that the Queen eats burgers, but with no bun. WTF? Gluten intolerance? No carbs before Balmoral? No, that's not it. The choice is nothing to do with dietary requirements at all but is all down to manners (of course).

Speaking to Insider, former royal chef Darren McGrady said that, although the Queen would eat burgers, her strict adhering to old-fashioned politeness means that she must always use cutlery to eat.

"Her Majesty's Victorian upbringing dictates that the only thing you would pick up and eat with your fingers is afternoon tea," McGrady said. "It always tickled me at Balmoral, we would make our own burgers," he added, referring to the Queen's Scottish summer abode. "They would shoot deer, and we would do venison burgers. There'd be gorgeous cranberry and everything stuffed into them, but we never set buns out." Poor Liz, that sounds like it would be fab in a brioche bun with lots of salad and a slab of gooey brie on top.

If not having burgers in the traditional manner isn't baffling enough, it turns out the Queen may also never have tried another popular food that you eat with your hands. Kate Middleton, Duchess of Cambridge, revealed on a visit to the King Henry’s Walk Garden in the London borough of Islington in Jan 2019 that she's not actually sure if the Queen has ever had a slice of pizza. US Weekly reported that when asked by a little girl if Kate's grandmother in law liked it she responded ,"You know, that’s such a good question. I don’t know. Maybe next time I see her, shall I ask?"

Kate never did fill the general public in on whether she's a fan or not but McGrady told US Weekly that the regent never had a slice of Italy's most beloved cuisine on his watch anyway. "In the years that I cooked at the palace, the queen never had pizza," he said.

Someone get this woman some Pizza Express vouchers. Please!