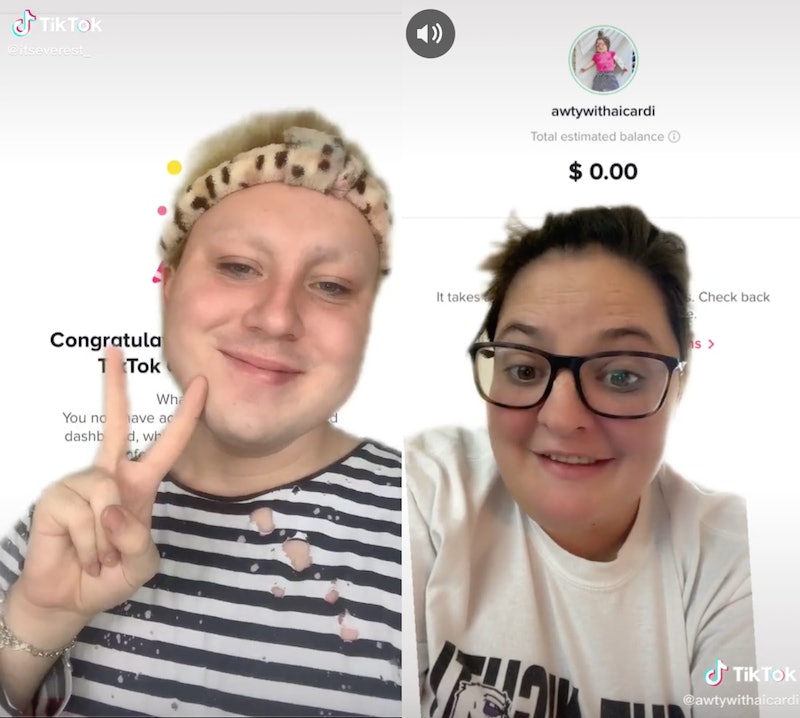 Can you actually make a living on TikTok if you haven't been invited to the Hype House and don't have a D'Amelio sister-level fanbase? If you've seen users on the For Your Page asking for likes and shares so they can make some money, they're likely referencing the Creator Fund.

Back in July, TikTok announced the Creator Fund Program, an initiative that promised to pay eligible TikTokers for their videos. At the start, the program planned to distribute $200 million to users over the age of 18, with minimum 10K followers, who've amassed minimum 10K views in the last 30 days. After enthusiasm from users, TikTok promised to grow the fund to over $1 billion, to be paid out over the next three years. To join, all you have to do is switch your account to Pro in Settings, then tap Apply in the Creator Fund section in the new Creator setting. If you don't qualify, the featured will be grayed out.

But despite the ease of joining, and the ubiquitous videos referencing it on the For You page, people who aren't part of the program say it's not totally clear how TikTok's Creator Fund works. Users say their engagement has been all over the place, and their payouts not quite what they expected.

Everest, 21, a part-time fashion student, freelance designer, aspiring drag queen and make-up artist, says joining the Creator Fund has given him confidence in front of the camera. "It’s my dream to do make up and drag full time and so hopefully TikTok will give me the exposure I need," Everest says. Though he declined to share how much he's made through the app, citing the Creator Fund user agreement, he says getting accepted into the program is not a reason to quit your day job. "I would not be able to rely solely on the funds for income," he says. Still, the validation that comes with getting paid for creative work at all, he says, might be enough to give people the confidence they need to explore this uncertain path.

Since joining the fund, however, he says his engagement has gone down, a claim echoed by other users across the app. "I think there is some correlation between joining the fund and getting less views, which can be discouraging because I suppose I expected my views to increase." Everest claims his videos are not showing up in the For You Page, and seem to be circulating less broadly than before he joined. Everest says he'd rather have more views and give up the money. "I feel like that might lead to better opportunities," he says.

Stephanie Hind, on TikTok's talent management and operations team, tells Bustle, "joining the fund has no bearing on the performance of creators' videos and no direct impact on the TikTok recommendation system." Despite claims, she says, the For Your Page algorithm has no way of knowing whether a user is part of the Creators Fund or not. As for how the funds are actually distributed, Hinds says number of views, engagement, region in which the video is viewed, total participants in the program, as well as the video's adherence to community guidelines and terms of service, all have bearing on how users get paid out.

As a result, the actual dollar amount enrollees can make varies widely. In August, Business Insider reported that some influencers made "pennies" on thousands of views. Janelle Correa, 18, went viral in January after posting a video of herself trying on a $32 prom dress she couldn't afford. Since enrolling in the Creator Fund in August, her total earnings are about equal to the cost of the dress. "It was less than I expected because I assumed I was going to get paid for all of my videos," she says. "The amount I make [isn't] crazy good at all but it’s an OK incentive for making videos about whatever I want," she adds.

While Correa had hoped to earn enough to cover her college tuition, she says she's happy to afford some books and coffee, though she won't be able to cash out her earnings until she hits $50. Still, she says she's noticed more engagement since enrolling. "I have gained followers that are pretty active on my account compared to when I wasn’t a part of the Creator's Fund."

For Mikayla Nogueira, 22, being part of the program has allowed her to create more content outside of TikTok and even expand into YouTube. "The more views you receive, the more money you earn that day, so I put my whole heart into my TikToks," she says. The make-up artist also makes money through brand deals, which came to her organically after three months on the app.

Nogueira is aware of that not all users in the fund are having the same success she is. "I see content creators making less than a dollar a day on the Creator's Fund, while others are making hundreds per day," she says. But she doesn't blame the program. "Over time, if you're doing everything you need to be doing, that monetary value should grow," she says.

Jayus, 21, went viral a year ago after making a TikTok about psychology facts she learned in school. She was fired from her day job right before reaching a million followers, and decided to lean into TikTok for financial support instead of finding a new gig. "Before my big blow up I kinda knew that I could make money from the platform," she tells Bustle. She did live-streams for donations and reached out to brands for influencer deals. When the Creator Fund opened, she enrolled right away, saying that it "felt like it was a huge step in the right direction."

Now, she says the fund helps to pay most of her bills. "It feels good knowing I have a semi-steady source of income." While she's had great success on the app, and felt confident in her ability to do so from the start, she says the algorithm is still a mystery to her. "When I feel like I have it figured out the algorithm, my videos don’t do well. But when I’m just messing around they do great." And though she says that other platforms pay creators more per view, "anything is better than nothing, and that money adds up quick."

More like this
Behind The Hilarity Of The "POV: You Walk Into My Room" TikTok Trend
By Lexi Inks
Here's How To Get Your iPhone To Update Automatically Forever
By Emma Carey
Why TikTok Is Obsessed With Caesar Salads Right Now
By Alexis Morillo
Why TikTok Is Flooded With Controversial Videos About "Pick Me Girls"
By Courtney Young
Get Even More From Bustle — Sign Up For The Newsletter