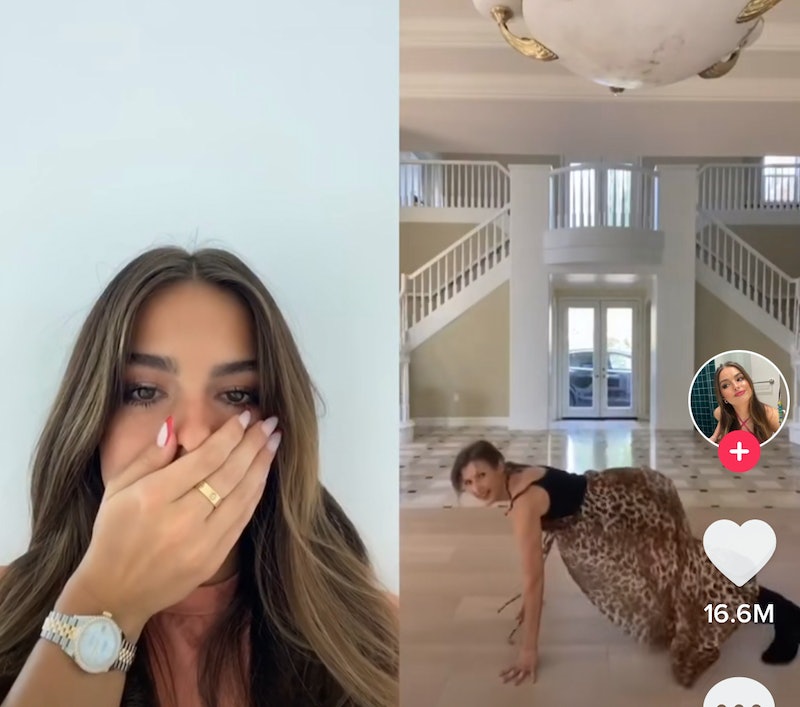 If you've ever seen a split-screen video on TikTok where one creator is responding to another video, you've seen a duet — one of the app's most unique features. Regularly appearing on the For You Page, videos with the hashtag #duet have garnered nearly two trillion views. If you've been shy about posting your own videos on TikTok, but want to dip your toes in the waters of #fyp level content, you'll want to learn how to master the duet video feature on TikTok yourself.

What Makes A Good TikTok Duet?

According to creator Adam Rose, who hosts a 66-part "accurate ratings" duet series, in which he rates the satisfaction of #oddlysatisfying content, creating a good duet is all about starting a conversation. "If you can get people talking to each other in the comments about your reaction, you've created something special," he says. But the first step to duet success is finding a video that you can "add something of substance to, turning it into a new piece of content," or having a reaction to a video "that increases the effectiveness of the original video," Rose says.

For Gordon Ramsey, yelling at people for making sandwiches out of bell peppers made the most sense for his duet style. For foodie Kate, blind reacting to holiday treat tutorials turned out to be a viral duet technique, over and over again. The duet style that's going to make the most sense to you is going to be a gut instinct, Rose says; for him, he noticed he had a lot to say about oddly satisfying videos before he even started filming his reactions to them.

How To Duet A Video On TikTok

Find A Video To Duet

First, you'll need to find a video to duet. If you're musically inclined, you can duet with a song, offering your own harmonies. If you want to dance, you can duet to share a body with another dancer. If you'd like to amend something you've posted in the past, you can duet your own video. If you have a critic's eye, duet to review another video.

You might find the duet technique is particularly appealing if your TikTok brainstorming sessions aren't yielding any fresh ideas. Duetting someone else's content is a low-pressure way to start creating your own. Get in the habit of saving videos by hearting them, sharing them, or putting the links to the videos you like in your Notes app so that you can return to them when you're ready to film your duet.

On the video you'd like to duet, tap the "share" button on the right side of the screen. Unless the user has specifically customized their share settings to disallow the duet feature, which looks like two linked circles, for their videos, you can duet it easy-peasy. If the video is not available to be duetted, the duet option will be grayed out. If the icon does appear after tapping "share", you just tap it to open up a split screen that allows you to record your video alongside the original video for immediate reference.

Tap the red button to record your side of the screen, and then play with the speed, add stickers, filters or annotations just as you would with a basic TikTok video. Once you're happy with your video, Rose says not to stress about hashtags too much; even without any hashtags at all, your video will find an audience and potentially make its way to the famed For You page.

More like this
How To Turn Off TikTok Profile Views So You Can Stalk Other Accounts In Secret
By Alexis Morillo
Ashamed Of Your Screen Time Stats? Here's How To Change That
By Alexis Morillo
This Wordle Rival Is Taking Social Media By Storm
By Sam Ramsden
Learning To Love, Not Judge, The Lunchbox Wives Of TikTok
By Esther Zuckerman
Get Even More From Bustle — Sign Up For The Newsletter
From hair trends to relationship advice, our daily newsletter has everything you need to sound like a person who’s on TikTok, even if you aren’t.