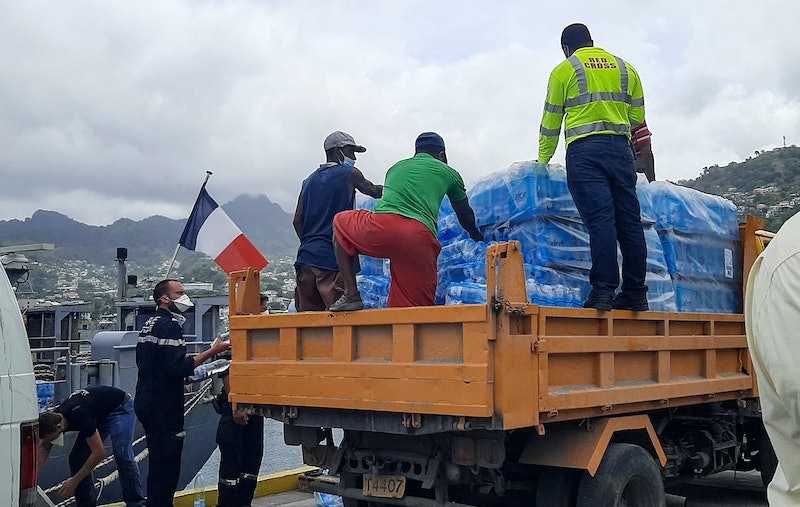 On April 9 the La Soufrière volcano in St. Vincent and the Grenadines began erupting, instigating a humanitarian crisis on the Caribbean island that UN officials have said could last for months. Since then, about one fifth of the population have been displaced. Aid teams are currently prioritising the provision of clean drinking water and shelter management for those who have been affected. Here’s how to support the aid efforts in St Vincent from the UK.

What Is Happening In St. Vincent?

The La Soufrière volcano began erupting on April 9, following the appearance of a lava dome on April 9, a sign of imminent eruption, according to the BBC. The volcano had up to that point remained dormant for decades. It last erupted in 1979.

Clouds of ash and smoke continue to be released from the volcano every day as regular eruptions occur, said UN Resident Coordinator for Barbados and the Caribbean Didier Trebucq, in a brief to journalists. The impact of the eruptions are expected to last “more than six months” in the sub-region and will affect neighbouring islands such as Barbados, Saint Lucia, and Grenada, he said.

In the immediate aftermath of the eruption, the island experienced a massive power outage, according to National Emergency Management Organisation of St. Vincent and the Grenadines. White ash fall has cloaked the island’s infrastructure, and Prime Minister Ralph Gonsalves said that the water supply has been severed and the island’s air space closed due to the lack of visibility from the ash fall.

On Apr. 14, the UN reported that around 20,000 people — or about one-fifth of the population — have been evacuated from their homes, with some 6,000 classed as vulnerable. Of those displaced, around 4,000 people are now living in 87 shelters, while others have been relocated to private homes.

Trebucq said that, based on preliminary calculations, 20,000 people are “estimated at risk of food insecurity, given the loss of the assets in terms of livelihood like fisheries, or agriculture.”

Officials have also expressed rising concerns that the crisis will result in a surge in the coronavirus cases, exacerbated by the lack of clean water. Dr Simone Keizer-Beache, St Vincent’s chief medical officer, said in a press conference broadcast on local station NBC Radio that at least five evacuees staying in two private homes and a shelter tested positive, exposing at least 20 people to the virus.

Erouscilla Joseph, director of the University of the West Indies’ Seismic Research Center, told The Associated Press that the explosion is similar in scale to the one that occurred in 1902, which killed around 1,600 people.

How To Support St. Vincent

In the UK, the High Commissioner of St. Vincent and the Grenadines, Cenio Lewis, has been working closely with the UK-SVG Friendship Trust to organise local fundraising efforts. A GoFundMe page, certified by the High Commission, has been launched. The MP of Wycombe, which is home to the largest Vincentian disapora in the UK, Steve Baker, has donated to this fund. You can contribute to the effort by donating here.

The UK Friends of the Mustique Charitable Trust has also started a fundraiser on JustGiving, which you can donate to here.

British rapper M.I.A has also started a crowdfund on GoFundMe, writing in an Instagram post that “Saint Vincent and the Grenadines has been very close to my heart. I wrote my first song there.” She described it as “her island away from her island.” You can contribute to her fund here.

More like this
Here’s Where The NHS Nurses’ Strike Currently Stands
By Sophie McEvoy
Gen Z Are Twice As Likely To Identify As Queer, According To New Data
By Sam Ramsden
How To Help Those Affected By The Turkey-Syria Earthquake
By El Hunt
Pret & Costa’s Coffee Is The Strongest On The High Street, According To Which?
By Sam Ramsden
Get The Very Best Of Bustle/UK
Sign up for Bustle UK's twice-weekly newsletter, featuring the latest must-watch TV, moving personal stories, and expert advice on the hottest viral buys.