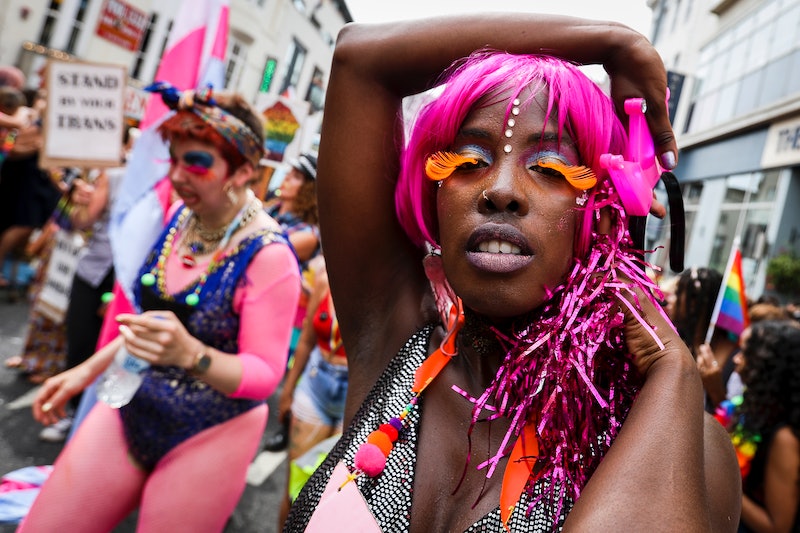 It's hard not to think about what could have been this summer. Yet, as the coronavirus pandemic continues to bring uncertainty across the world, cancellations of major events, festivals, and gatherings have become the norm. Unfortunately, Pride celebrations have also been cancelled to prevent the spread of the virus — a huge loss for the LGBTQ community and allies who look forward to the yearly rainbow-dipped celebrations. With events across the country being given the digital treatment, musicians and other performers are taking their talents to social media, but what do UK organisers have planned for Pride 2020?

For June's Pride month, organisers across the UK are adapting to lockdown restrictions to ensure the LGBTQ charities are still supported and people still can celebrate during difficult circumstances. From Instagram live music gigs to virtual parades, it seems as long as we have wifi, the party and the protests do not stop.

Amnesty International, UK Black Pride, Stonewall, and ParaPride have joined forces to create Pride Inside — an online series of gigs, comedy shows, panel discussions, and arts-based events. From June 28 to July 5, they've enlisted a number of LGBTI+ comedians, artists, DJs, musicians and activists to support those who are disproportionately affected by the coronavirus.

UK Black Pride is celebrating its 15th anniversary this yeah and although all IRL events have been cancelled, organisers are taking the festivities online. On Sunday, August 16, the virtual celebration will feature an exciting array of performers and speakers from 12 p.m. until 6 p.m. The festival can be accessed via the ukblackpride.org.uk website and will be spread across four ‘rooms’: Main Stage, Wellbeing, Desi, and Queer Young Folx. The virtual Main Stage will host model and activist Munroe Bergdorf, Drag Race UK contestant Vinegar Strokes, and Dominique Jackson (Pose). Other acts featured on the line up include drag artist Val Qaeda, singer Jason Kwan, drag king Beau Jangles, Afrobeats star Nyja, Aaron Carty’s Beyoncé Experience, and Philadelphia-born singer VINCINT.

To mark its 30 years as one of the UK's biggest Pride festivals, Brighten & Hove is cooking up a summer digital festival to help raise essential funds for LGBTQ community groups. And good news: some of the performers scheduled for the original FABULOSO Pride festival are on board to put on some socially distanced performances streamed via the Brighton Pride website, YouTube, and on other platforms to be announced. Over August 1-2, see acts from the Cabaret Stage, BAME Stage, Pride Dance, Big Top, QueerTown, Trans Fabuloso Stage, all available to enjoy at home.

Bi-Fi festival will be taking over the airwaves on June 20 for its first virtual celebrations. Streamed entirely on Twitch, tune in for panel discussions, DJs, drag queens, spoken word discussions, and more. Via TimeOut, organisers are "inviting all bi people and allies to paint their homes with pink, purple, blue and yellow to create a backdrop of bi-positivity for the day."

After rescheduling its annual parade for 2021, Pride In London are committed to keeping the spirit of the celebrations alive with a series of digital events. Whether they are in the form of Instagram Live Q&A panel discussion or remote speed dating, Pride In London have a growing list of online programming via platform Coming Out. And I'm definitely tuning into the Ultimate Girl Band Quiz with RuPaul's Drag Race UK star Cheryl Hole.

London organisers also remind us that members of the LGBTQ community may be suffering the affects of isolation during lockdown and that divisions between the community are still something that needs to be address with its You! Me! Us! We! campaign, which has seen the launch of "a brand new digital community hub to galvanise people into making much-needed 'Acts of Allyship' for those in other LGBT+ groups."

Pride In London have also highlighted that they plan to support the continued lobbying of government decision-makers on issues that impact our LGBTQ communities such as the Gender Recognition Act.

Hundreds of people tuned into Birmingham's 'Digi Pride' event, streamed across Youtube, Facebook, and Twitter on May 24. The team instructed viewers to "slip on their Dorothy Shoes", turn up your speaker, pour yourself a drink and get ready to wave your Pride flag as they shared a series of live gigs from the city's DJs and drag queens.

Following lockdown restrictions, Birmingham had initially rescheduled its annual May Bank Holiday parade and party for September 2020. Due to headline was both Cheryl and Kelly Rowland, However, organisers made the difficult decision to reschedule events for 2021.

Despite having to cancel its "biggest Pride celebrations yet" due on August Bank Holiday weekend, Manchester Pride have been busy putting on a variety of streamed performances from DJs to Manchester's very best Drag Queens on its channels (Cheddar Gorgeous is a personal favourite of mine). No strangers to huge headliner performers (hello, Ariana Grande), the team kickstarted Manchester Pride: Live In Your Living Room by showing performances from Manchester Pride Festivals 2017, 2018, and 2019 over four weeks.

Newcastle was chosen to host 2020's National Pride events this July, yet will reschedule for next year. This year they've gone digital and will be hosting events across Facebook and YouTube from July 18.

Tweeting earlier this month, Northern Pride shared that a virtual march will be "at the heart of the event" and are encouraging people "to send in images or videos of past Pride events they have attended." There's also guest speakers, live performances and they'll end the celebrations with a candlelight vigil.

"The show must go on-line," say Pride Bristol and they will be dedicating two weeks in September to just that. From September 1, digital party goers will see annual faves like the dog show, film festival, comedy night, family and wellbeing activities. Of course, there is a Pride Celebration Day Parade with virtual performances, followed by afterparty DJ sets to keep the celebrations going into the evening.

Not in the UK, but still worth mentioning as Belfast was preparing for its huge 30th celebrations, set to take place on August 1, with big plans to have the first Carbon Neutral Pride in 2020. Instead, there will be a "unique" online experience on the day — and it sounds like a great ol' time. They've announced an online "party in the square" featuring performances from local LGBTQ talent, followed by an extra online Belfast Pride After Party. A late night without having to get a taxi home? Fab.

Organisers have also promised to host the Belfast Pride Awards, "Pride Talk Backs" and online showcases from popular LGBTQ venues. Look out for its full programme of events, including an online Pride Parade "to bring positivity, celebration and defiance."