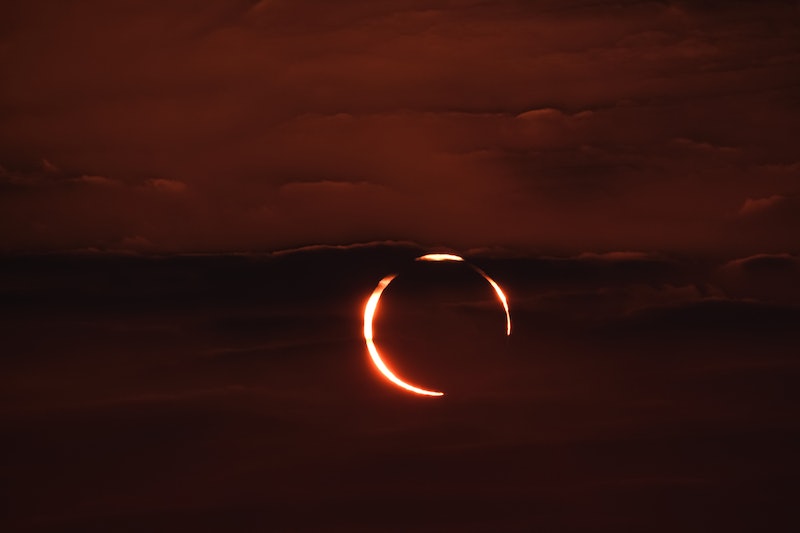 Dubbed the “ring of fire,” 2021’s first solar eclipse is one not to be missed. The solar eclipse gets its name due to the moon appearing smaller than the sun, and not fully blocking the sun’s light. The result? A bright orange and red ring that pays an accurate ode to the eclipse’s nickname. As astrologer Nina Kahn previously wrote for Bustle, “New moon eclipses are an astrological phenomenon known for bringing sudden new beginnings and unexpected news. This annular solar eclipse also puts on a rare and dazzling show in the eastern sky, as the sun will form a glowing ‘ring of fire’ around the moon.”

If you geek out on astrology and already know how the June 2021 new moon will affect your zodiac sign, major props to you. But chances are that you’re probably wondering how to get a front row seat to the event. Not to worry, we’re here to help you out.

First things first, in order to see the phenomena, or at least partially, you need to be located in the United States, Northern Canada, parts of Europe, Asia, North/West Africa, the Atlantic, or the Arctic. However, if you’re unable to venture out safely at the time, you can still watch the year’s first Solar Eclipse live online through several different outlets. The solar eclipse will start to be visible as early as 6:53 a.m. Eastern Time, so be sure to be up bright and early. If you are unsure of when the Solar Eclipse will be visible near you, simply use this tool to gauge as a heads up.

According to the American Astronomical Society, “The only safe way to look directly at the uneclipsed or partially eclipsed Sun is through special-purpose solar filters, such as ‘eclipse glasses’ or handheld solar viewers,” so it’s important to follow guidelines in order to keep yourself (and your eyes!) safe.

Enjoy the eclipse, and make sure you’re able to view it in some capacity since it doesn’t happen often!