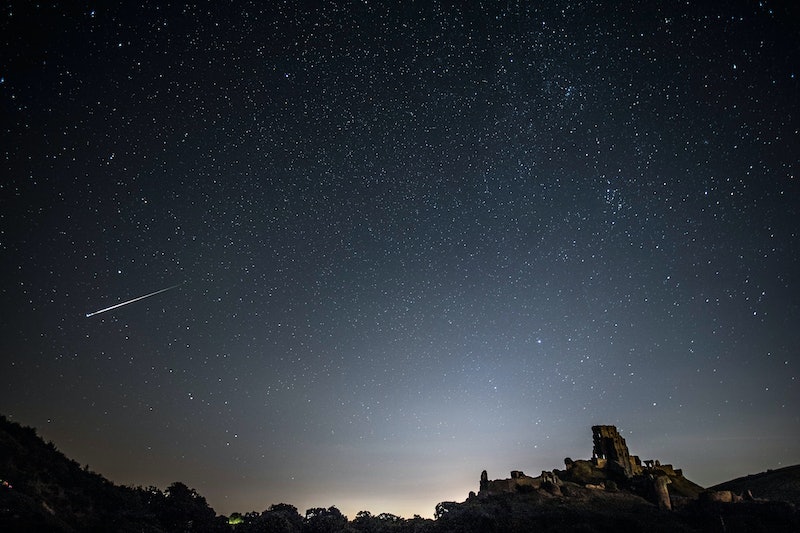 Stargazing is the perfect pastime for warm summer nights, and we just so happen to be in the midst of one of the 2020's brightest meteor showers. If you're lucky enough to be blessed with clear skies (and not thunderstorms) for the next couple of nights, here's how to watch the Perseid meteor shower in the UK and marvel at the wonder of this natural event.

Regarded as one of the most active meteor showers on the astronomy calendar, this event is caused by "the Earth slamming into the debris left behind by comet 109P/Swift-Tuttle" the Royal Museums Greenwich explains. This comet takes 133 years to orbit the sun once and the dust left in its wake is what the Earth passes through each year "which allows for bits to collide with our atmosphere whey they disintegrate to create fiery and colourful streaks in our sky," writes NASA.

As a result, the Perseid meteor shower is known to be one of the most reliable of the year — especially if the conditions are just right. The shower occurs between July 16 and August 13 to be exact, with its peak on the night of August 12 before the dawn of August 13 where there's a possibility you'll see a maximum of 100 meteors per hour under perfect conditions.

While you'll be able to see the Perseid meteor shower as soon as the sun sets, the clearest view of this phenomena is between midnight and 5.30 a.m. Royal Museums Greenwich recommends that it's best to view them when the moon is below the horizon "or when it's in its crescent phase" as it can act as a natural light pollutant.

Speaking of light pollution, make sure that if you're in a built-up area around street lamps to face away from them or find an area of the sky to look at with the least amount of light. You don't need a telescope or binoculars to witness these trails of debris either as they're pretty hard to miss, and you'll restrict "the size of the sky that will be visible to you."

Astronomy site Earth Sky also recommends that you let your eyes adjust to the darkness for optimal viewing, and to give yourself "at least an hour of observing time" as the meteors will "come in spurts and are interspersed with lulls."

Another amazing thing about this meteor shower is that they'll all be coming from one direction, the constellation of Perseus. So once you see a few, try tracing them back across the sky and you'll discover this constellation in the process (it's just below Cassiopeia and above Taurus and Aries).