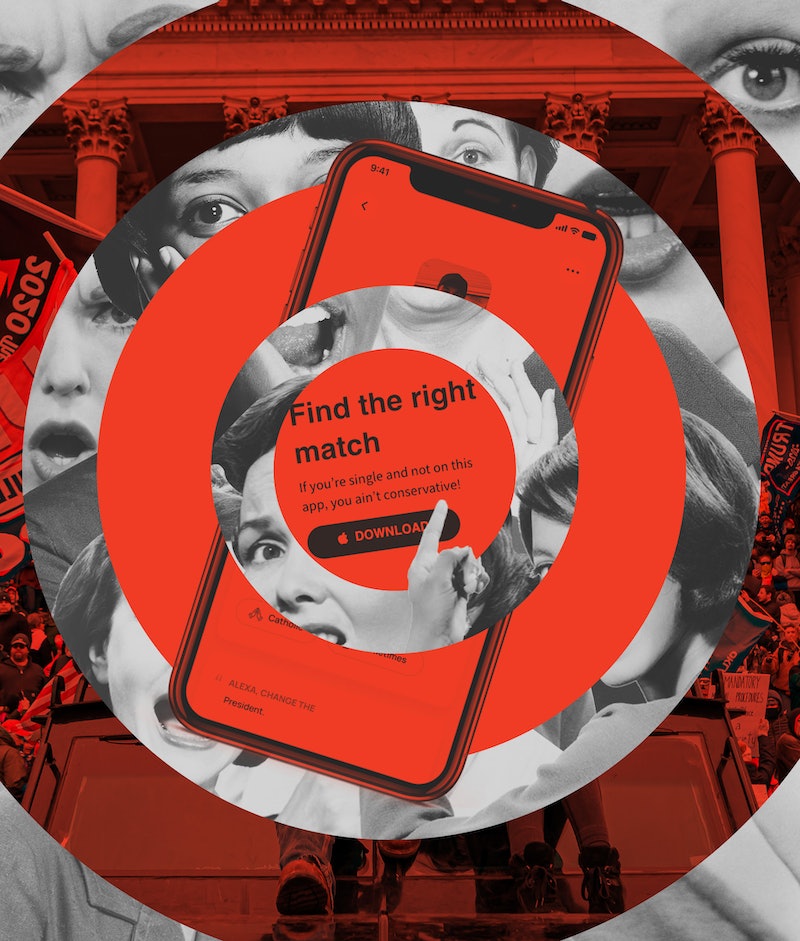 It’s wedding season again! Actually, it’s not, which is why my third-cousin’s November wedding is unusual. This part of my family is extremely conservative, and I’ve been informed that if I want to bring a date at all, I need to bring one who fits in.

Fortunately, Peter Thiel has my back. It seems that even after stepping down from Facebook, he hasn’t given up on right-wing dating apps. Indeed, on Sept. 30, Thiel invested $1.5 million in The Right Stuff, which launched as a hub for conservatives. Sadly, it’s invite-only, perhaps because there’s an option to admit that you were part of the January 6 riots and the FBI is at capacity.

Reviews of the app have noted a few issues: Even if you fill out a profile, you can’t actually start swiping until you receive an invitation. People say there are almost no female users. Oh, and some users have claimed they actually did get calls from the FBI. The Right Stuff currently has an average rating of 2.6 stars in the App Store. It just launched, though — I’m sure they’ll work out the kinks in no time. The FBI must have something better to do, right?

Each Right Stuff user has three invites, so I needed to find someone who hadn’t used all of theirs and then ask them to invite me. I made several pleas to my Instagram and Twitter followers, and went so far as to let the app search my phone contacts for users who might be on it. No dice. In hopes of upping my chances of entry, I decided to fill out the profile in the way I thought most appeal to users. I have to admit, I’m not “technically” a “conservative,” so as such, I needed to get myself into a different mindset to fill out the form. If you’re my dream wedding date, shoot me a line. Especially if you like dancing!

ZIP Code: Maybe it’s better if I treat this like the nuclear codes and say that mine are at Mar-a-Lago.

Sex: Female. (The app gave me exactly two options and warned me it could not be changed later.)

Height: 5-foot-7. (Unlike sex, I am allowed to change this later — and I will if I meet a 5-foot-6 king. I’d never want to emasculate a man by towering one whole inch over him.)

What are your ideal plans for children? The options are “want kids,” “open to kids,” “already have kids,” and “not sure yet.” I reread them several times to find the option for “don’t want kids” (which is my truth), but alas, it was absent. Indeed, the closest thing to it was to say I already have them, so I’ll go with that. Bess and Bessie. Twins. (OK, those are the names of my cats. No one will know.)

Customize Profile with Music: I hadn’t heard of the first song offered, and the second was by Chris Brown, so I’m going with option three, “God Bless the USA.”

Favorite Liberal Lie: There’s nothing funny about liberal lies, and they shouldn’t be used to bond two people together. Joe Brandon’s never been elected to sh*t!!!

If Loving This is Wrong, I Don’t Want to be Right: America.

January 6 Was: Definitely not an appropriate time to riot, if anyone at the FBI happens to be reading this.

My Favorite Conservative Pundit Is: Does Jenna Bush count as a pundit? Or a conservative? Either way, she’s on TV a lot and she’s adorable.

Within five minutes of finishing my profile, I had eight spam emails from a sex site called FlirtyMature. This could, of course, be just a coincidence.

It’s been two days since I submitted my entry and I still haven’t scored an invite, even though the app is all men. Please invite me to The Right Stuff. I don’t want to go to this wedding alone.

More like this
Here's How Netflix Should Adapt Prince Harry's Memoir Into A Movie
By Ginny Hogan
Learning To Love, Not Judge, The Lunchbox Wives Of TikTok
By Esther Zuckerman
Savannah Guthrie Got Her First-Ever Tattoo With This Former Wild Child
By Suzanne Zuckerman
Flip Phones Are Gen Z's Favorite New Nightlife Accessory
By Maria Santa Poggi
Get Even More From Bustle — Sign Up For The Newsletter
From hair trends to relationship advice, our daily newsletter has everything you need to sound like a person who’s on TikTok, even if you aren’t.