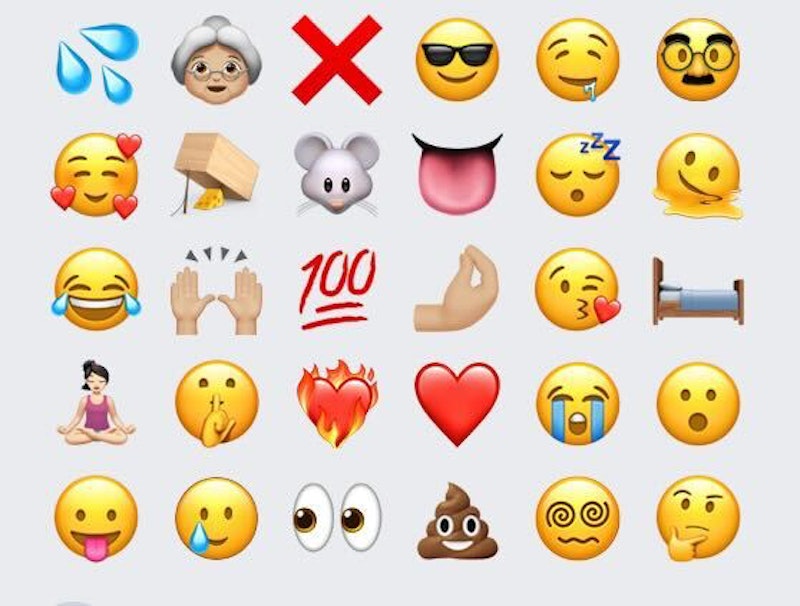 The Gen-Z emoji commandments have been made clear. Thou shalt not — under any circumstances — use the sideways laughing emoji (🤣), definitely not the crying laughing emoji (😂) or the thumbs up emoji (among several others). The language of emojis is a science, and the more emojis there are, the weirder, more ironic, and more nuanced their usage becomes.

A new wordplay challenge is making its way around Twitter, and all you need are the emojis in your phone, some witty one-liners, and/or your favorite pop culture references. The emoji trend — “if I text you [insert emoji here] it means [insert here]” has people coming up with some of their favorite jokes and references that highlight their own emoji usage and practices. The weirder and more chaotic, the better.

As with most wordplay trends, Twitter’s take is absolutely elite humor, and the emoji references are only getting more outlandish.

Remember when “Wicked Witch of the East Bro” made its rounds through the internet in 2018? In the video, two people are arguing over whether or not the character Glinda the Good Witch from The Wizard of Oz is a princess. The main argument was yelled with such conviction that it instantly became internet comedy gold, and user @imbradysullivan brought the reference back into Twitter virality with the new emoji trend. The tweet amassed 274,000 likes, and was retweeted over 50,000 times.

Another user @Browntweaten, tweeted the test tube and llama emojis to reference one of the most comically memorable moments from The Emperor’s New Groove, and the replies swarmed in with love for Kronk. Someone even replied with their own emoji reference from Kronk’s New Groove. “If I text you "🥚🥚🥚” it means these are Kronk's eggs, property of Kronk. Do not use, except for Kronk.”

The Twilight Saga is a goldmine for meme inspo, and a throwaway line from the 2009 film New Moon is spawning cakes, shirts, tweets, and plenty of remixes on TikTok. If I had to declare a winner for this trend, this one by user @apesgonewild would definitely be it.

Aside from quoting movies, viral videos and beloved pop culture references, users also wittily paired emojis with clever or relatable one-liners, like @jjaahz_. Finally, a reason to use the accordion emoji.

Twitter trends have a way of bringing all corners of the internet together, but the best part about this one was its relatability and universality, especially when it comes to wordplay, hilarious (and often unhinged) emoji usage, and the references to the collective internet cultural canon.

More like this
What Does POV Mean On TikTok? The Popular Acronym, Explained
By Emma Carey
13 Selfie Instagram Caption Ideas That Exude Main Character Energy
By Jessica Booth and Emma Carey
TikTok Is In Its Elle Woods Era
By Meguire Hennes
RushTok 2022 Is Here & TikTok Is Just As Obsessed As Last Year
By Sarah Ellis
Get Even More From Bustle — Sign Up For The Newsletter