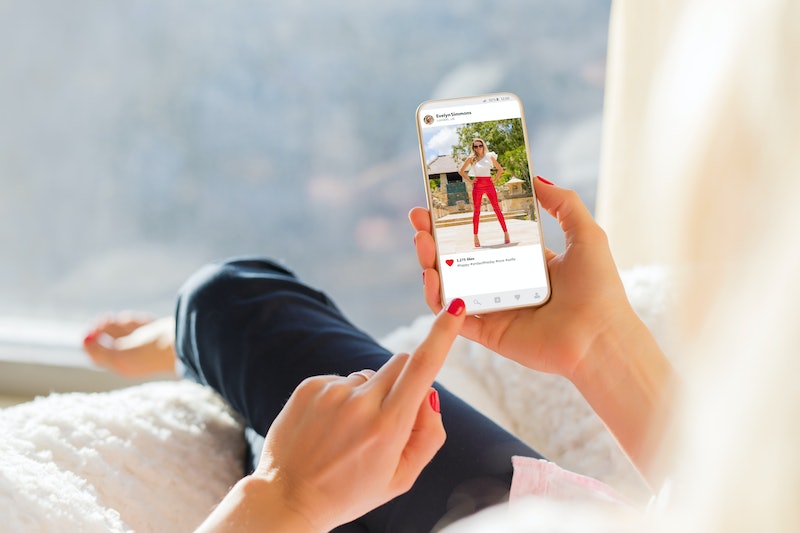 When your entire career is based on telling people to go where you go and buy what you buy, what do you do when your audience can't go anywhere or buy anything — and they're all still watching your every move? During the coronavirus pandemic, influencers are trying their best to stay in business while also being responsible sources of information for their followers, whether they signed up for that last part of the job or not.

"First and foremost, this is a very real global human health crisis and so business is always secondary," model and influencer Emily DiDonato (@emilydidonato) tells Bustle. Though she says her business has been impacted, she made the choice to "put humanity ahead of work" for her 2.1 million followers. She says she feels an increased responsibility to be thoughtful in her use of the platform: "[My followers are] going through a lot, with emotions running high right now."

Other influencers are also dealing with major shifts in the kind of content they're making, and learning about the responsibility that comes with having a captive audience.

How Influencers Are Dealing With Income Changes

DiDonato makes most of her money from modeling, but she hasn't been able to shoot any campaigns. (In fact, this is the longest she's gone without traveling for work since she was 16, she says.) She's had to rely entirely on her social media content for income.

Lifestyle blogger Ayana Lage (@ayanagabriellelage) tells Bustle that her number-one source of income is dropping. "I’m usually contacted by four to five brands a month about paid partnerships, and that’s pretty much stopped." (Editor's note: Lage is a former Bustle writer.) Several campaigns Lage was working on for the months of March and April have been pushed back or paused. "For some brands, I think it’s an issue of sensitivity and wanting to be careful with messaging. For others, I think it’s a budget issue," Lage explains. As brands cut down on expenses, influencer marketing becomes "less of a priority," she adds.

Austen Tosone (@austentosone) says she had a good first quarter of 2020, but is already seeing coronavirus's negative impact on her next few months of income. (Editor's note: Tosone has previously freelanced for Bustle.) "I assumed that that momentum of brands reaching out would carry over to Q2. With the impact of COVID-19 though I've only been approached for one paid campaign in the last month," Tosone says, explaining that typically she'd have more offers on the table.

How Influencers Are Dealing With Changes In Their Community

Most influencing is predicated on an aspirational, filtered view of the world, which obviously isn't possible during this time. Influencers have had to learn how to give their followers what they want right now.

"The entire team regrouped once we all realized the severity of the situation and discussed the value we want to bring to my audience at this time," says model and lifestyle media entrepreneur Valeria Lipovetsky (@valerialipovetsky). "I wanted to focus on what I felt was the right balance between entertainment, education, and what made sense for our partners," she says. She's started a virtual book club on Instagram for her 687k followers and made YouTube videos like "Myth Busting COVID-19 with an Immunologist," and "Calming Deep Breathing Techniques — a departure from her usual travel vlogs and shopping hauls.

Lage also felt like it was important not to ignore what's happening in the world. "Not all of my content is focused on social isolation or coronavirus, but I’ve been open on Stories and in posts about how it’s affecting me personally," she says.

Tosone tells Bustle that she has shifted her tone to be a bit more serious and direct, especially when it comes to relaying information. "If I repost content related to coronavirus I make sure it’s from a reputable source like WHO or the CDC," she says. The former magazine editor turned beauty influencer has also been sharing quarantine skin care routines and #WFH set-up suggestions with her 11.9k Instagram followers on top of her full-time job at a tech start-up.

Dancer and content creator Donte Colley (@donte.colle) says he sees "challenge as change." This perspective allowed him to adapt to the idea of his brand growing in different ways during the pandemic. "A big part of my business is traveling and even though I have a bit more down time, I definitely haven’t stopped working behind the scenes." Instead, Colley is creating quarantine dance diaries for his 834k Instagram followers.

How Influencers Are Supporting Their Community

Whether it's sharing a meme about being bored in the house (or in the house bored), a cooking tutorial, or a financial giveaway to help fans in need, influencers are working hard to keep their followers engaged.

Colley says he's doing his best to encourage his followers to embrace a positive attitude, though he recognizes how hard that is. "This time isn’t easy for anyone of us, and it’s something none of us really prepared for," he says. "I have always aimed to use my platform to connect with others and build that sense of community. We need it now more than ever," he says.

DiDonato is trying to share the kinds of things that keep her own spirits up right now — you may have seen her "Socially Distanced Glow Up" or "How to Look Good and Feel Confident on a Video Call" uploads recently. "I always want my content to be positive and entertaining for people, but I also need to be honest about the ways in which I am coping with the current situation and the ups and downs that come with it," she tells Bustle. A respectful balance is crucial: "I am trying to create content that can be helpful and positive while also setting a good example and following current health guidelines."

Last month, Lage banded together with some of her followers to help members of her community in need. "I just asked people to message me if they were struggling to pay their bills due to COVID-19, and also said that anyone who wanted to help could Venmo me. Then, I donated about $150 of my own money and money gifted by my followers to people who needed it." Lage says that educating her followers is another way tangible way for her to help. "There’s so much misinformation out there. I feel the responsibility to share the importance of social distancing and staying home on Instagram Stories whenever I have the chance."

One of the most surprising recent changes on social media is the way in which the gap between celebrity and fan has narrowed. For Lipovetsky, who recognizes that the crisis is "naturally bringing people together," she is finding also that her follower’s patterns have changed. "They have more time and more of a willingness to connect and engage with me and other members of my community," she says, adding that she thinks this trend could outlast the pandemic.