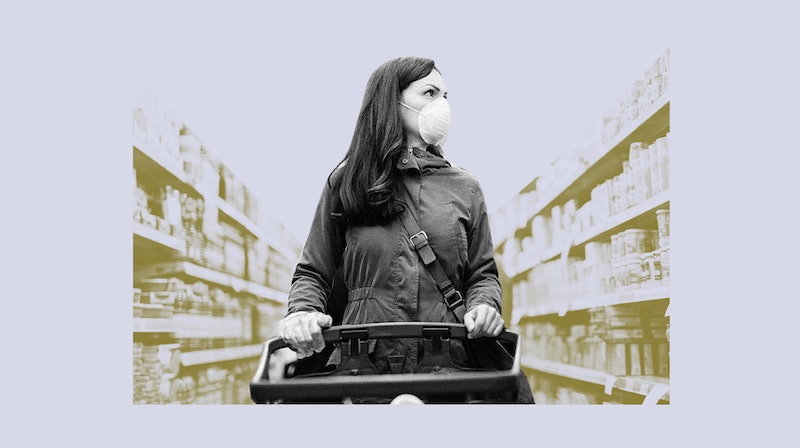 Health officials Monday asked us to stop going to the store. Two weeks ago, they asked us not to hoard groceries. Sooner or later, we're going to need to restock on coffee beans and pasta, especially since social distancing guidelines have been extended through the end of April. Do we put on a mask and go to the store? Do we opt for delivery instead? Isn’t getting delivery just asking someone else to do the very thing health officials said is too dangerous to do? These are the ethical dilemmas raised as nationwide quarantine guidelines continue to develop, keeping shoppers at home. Delivery giants like Amazon and Instacart have struggled to keep up with the increase in demand, and the weight is falling on workers’ shoulders, leading to widespread strikes.

Sarah Polito has been an Instacart worker since 2018. When someone places an order through the app, Polito is one of the shoppers on whose phone the order pops up. If it’s an order worth risking exposure for (Polito says workers barely get paid for smaller orders), she drives to a store like Wegman’s, picks out each item, and delivers it directly to the customer's door. Or at least that’s how it used to go. Since the government guidelines on social distancing, Polito added frequent hand sanitizing, wiping down her car, and contactless delivery to every order. Working during the coronavirus pandemic meant that Polito was putting herself at risk every time she shopped, and she says the company hasn’t done enough to protect shoppers like her.

Because of the sharp increase in demand and the growing risk to workers like Polito, Instacart’s shoppers teamed up with the Gig Workers Collective, an organization that helps fight for better standards for people who make a living off independent contract, temporary, and project-based work. Instacart shoppers staged a walk-off that kicked off their strike on March 30, demanding protective equipment, hazard pay, an extension on pay for those who can’t work due to COVID-19, and an extension of the time period during which workers can qualify for these benefits.

Days into the strike, Instacart announced it would be providing workers with kits containing a reusable mask, hand sanitizer, and thermometer. But Polito tells Bustle that the kits aren’t readily available and she still hasn’t received any safety materials. The company needs to do more, she says, and people who can stop using Instacart during the strike should opt for an alternative. Bustle recently spoke to Polito to find out what’s driving strikers like herself and how online shoppers can make sure their orders don’t put others at risk.

When did you realize that COVID-19 was going to affect how you do your job?

It wasn't until probably February when we started realizing that [the virus] wasn’t just in China, that it was spreading. So it was only a matter of time before it got here because that's just how it works. My husband and I, we never thought that this was going to be over quickly. Over the past month and a half panic started to set in for a lot of people. I saw stores starting to deplete, and some people going absolutely insane.

How did it feel when it was announced that delivery workers and grocery store employees would be considered essential during shutdowns?

I definitely never would have thought that in my lifetime I would be an essential employee. I didn't think that my job was actually considered essential. I mean, I know there's people that need it and use it, that it’s something that has to be done, but I never would have guessed that in my lifetime. But it has changed quite a bit. Now I'm not just walking into a store to get milk for me and my husband because we need it; I’m trying to stay out of the store if I can. I only go when absolutely necessary, or if I get a decent enough order. I'm not going to risk my health for 20 bucks. It's just not gonna happen.

It's hard to explain how going into a store is scary now. Before, I could [take Instacart orders] every other day. I loved shopping. And now I'm like, please just get me out of here. You have so many people that just are not taking social distancing seriously no matter where you go. There are signs everywhere that say stay 6 feet apart. And people just don't care. They come right up on you.

What drove you and other Instacart shoppers to organize for better working conditions?

To see the way people still view gig workers and any type of grocery worker or fast food worker, restaurant worker, saying that that's not a real job ... I made $700 last week. Tell me it's not a real job. I worked my butt off for that money, and that was more than what my husband brought home and he went to school for four years and has $20,000 in debt from college.

We are essential. We're putting our lives or at least our health at risk. And we're trying to look out for the customers as well. If we have shoppers who are told to stay home by their doctors because they're quarantined, but they haven't been tested, they should not be working. But if they can't get paid sick leave like Instacart promises because they haven't been tested, a lot of them may go out and continue to work, which could then spread it. That's what we're trying to stop. We also want shoppers to have all the protections and precautions that they possibly can have at this point. We don't think that we're asking for anything too much. Again, it comes down to protecting not only ourselves but everybody else that we are around.

What can people do right now to support gig workers going on strike?

It really depends. We know that not all shoppers can just stop shopping and we don't fault them for that at all. But that would be the best way to support us during the strike. If you have to continue to shop, do it. We want you to take care of yourself and your family, but use your voice. Be a voice of reason explaining what is going on and talk to people. Put it out there on social media. The best thing you can do is just advocate and just tell people because they're not gonna know if you don't.

Outside of that, protecting themselves and helping us protect customers. Wash your hands all the frickin' time, like to the point where they're dry and cracked. Well, hopefully not cracked, but they're going to get dried out.

How can online shoppers make sure retailers are treating workers well?

The biggest thing is to just do a quick Twitter look up. Look up reviews. Trustpilot is a good one. Check the BBB ratings. Just be proactive.

Do you think people should be doing their own shopping right now?

I would much rather have people staying home and allowing a set number of shoppers to go out and do it for you. That's less people going in. I have less of a chance of giving it to somebody if it's just me going in all day rather than 15 other people I’m shopping for. So that's how I look at it. I'm not only looking out for the customers, but I'm also looking out for those in-store employees because they have to work. They've got to be there in order to get that job done. So seeing the government and so many people back us on this is amazing.

Is there a way that online shoppers can do more for people who work for delivery services?

Look for an independent contractor or personal shopper in your area, because you would be surprised to know that we actually exist. We are out there, even though we're not everywhere. People are constantly moving away from the gig economy and actually starting their own type of business. So just looking for it. Search your local area for a personal shopper or grocery delivery and see what comes up besides these bigger apps. Because it's not just an Instacart doing this. The majority of gigs that are out there right now, they all misclassify us. They all pay us extremely, extremely low wages. It shouldn't even be possible that they can do that, but somehow it is.

Take the time. Do research and read reviews. See what people are saying because we're out there, we are loud, and we are not afraid to make our voices heard.