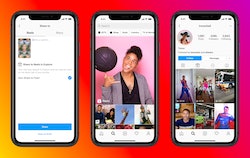 Amid the U.S. government's plans to potentially ban TikTok due to data privacy concerns, on Aug. 5, Instagram announced the release of a new feature that's similar to the China-based app — Instagram Reels. The company began first testing the feature in Brazil back in November, and just rolled out the feature to 50 countries, including the U.S.

"We’re excited to bring Reels to more countries, including the U.S.," the spokesperson said. "The community in our test countries has shown so much creativity in short-form video, and we've heard from creators and people around the world that they're eager to get started as well."

Similar to TikTok, Instagram Reels allows its users to create 15-second videos using popular songs. Also like TikTok, Instagram hopes for Reels to become a place where users can partake in fun challenges and trends.

As Instagram Vice President of Product Vishal Shah told TechCrunch earlier this month, 45% of Instagram videos are 15 seconds or less, making Reels a great feature to help showcase the videos users don't want to post on their stories or feed — though they have the option to post the videos there, if they want. With the ability to film, add filters, include music, and share that film in a separate space specifically for videos, Reels will provide an extra layer to users' Instagram experience. And though the feature has just been released, it could eventually be a welcomed replacement should TikTok get banned.

You don't have to worry about copyright issues using the music available on Reels because Instagram has partnered with big-name labels in the industry to make the music accessible with its users.

Instagram Reels are pretty similar to TikTok. The essence of the two interfaces are the same: To provide a creative space for users to make, edit, and share short videos with followers. Like TikTok, the Reels feature comes comes with different audio, effects, and tools to help create your best possible video. But while Reels is being launched with a 15-second time limit, TikTok allows users to create content up to 60 seconds long. Vishal Shah, Instagram Head of Product, told Business Insider that Reels is a more tailored to help users create AR content.

The Reels feature can be accessed the same way as Boomerangs or Instagram Lives — through options at the bottom of your screen in Instagram's camera feature. By tapping or holding down the circle at the bottom of the screen, users will be able to start recording their 15-second videos with options like speed, effects, AR filters, and a timer available to them. Reels gives you the ability to use your own original audio as well, and then share that audio with other users for their own Reels.

Once you've recorded your Reel, you can choose where you want to share it. Along with your feed, your Story and in direct messages to other people, you even have the option of sharing your Instagram Reels on the Explore page for everyone to see. The Instagram Reels that have the most engagement will appear here. Reels you create can also be added to a "Reels" tab on your profile.

Though Instagram Reels was supposed to roll out to the U.S. and 49 other countries on Aug. 5, it's possible that users still don't have access to the app. If that's the case, it's possible that you need to update your app or your phone. If that still doesn't work, you might have to be a little patient. Sometimes rolling out new updates take time — especially when they're being released globally.

More like this
Why Everyone Is "Soft Tagging" Friends On Instagram Right Now
By Alexis Morillo
19 Latinx Therapists & Mental Health Experts To Follow On Instagram
By Kaitlyn Wylde, Naydeline Mejia and Lexi Inks
Why TikTok Is Flooded With Controversial Videos About "Pick Me Girls"
By Courtney Young
20 Smart Devices Under $35 That’ll Change The Entire Vibe Of Your Home
By Emma Carey
Get Even More From Bustle — Sign Up For The Newsletter