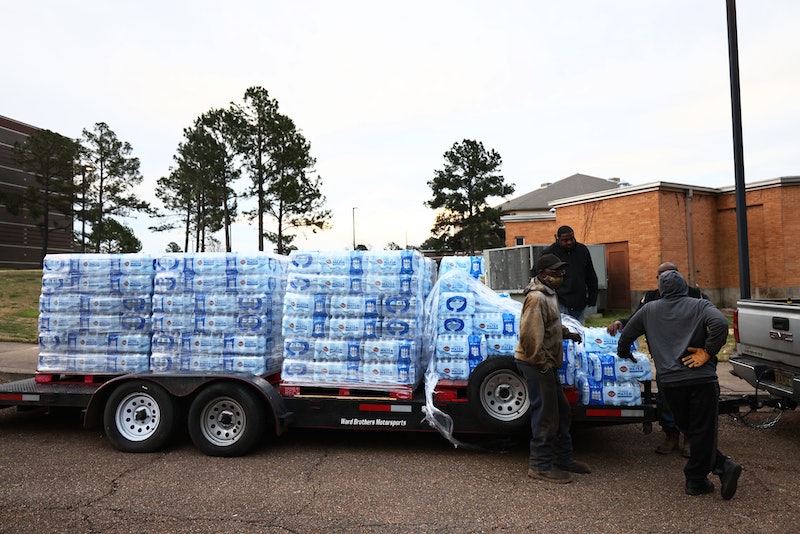 A few weeks ago, the dangerous winter weather conditions that hit the southern U.S. made headlines across the country, with much of the attention placed on Texas. But those in neighboring areas were just as impacted by the extreme winter storm. Take Jackson, Mississippi, where the city’s water supply froze and burst. Weeks later and many residents are still without any drinking or flushing water.

The city — and roughly 5,000 of its residents, the majority of which are low-income Black families — is experiencing a water crisis. Cassandra Welchlin, the state organizer for the Mississippi Black Women’s Roundtable, a network that pushes for equitable public policy for Black women and girls, tells Bustle that many people in Jackson are unable to afford food because they can’t get to work. Others are forced to stay home from their jobs because they can’t perform simple everyday tasks like taking a shower or brushing their teeth.

Weeks after the winter storm, Jackson, Mississippi is experiencing a water crisis.

She puts the blame on the state’s weak infrastructure. “This has been a long-standing problem,” says Welchlin. Politicians don’t always put resources where they need to be, she explains, which is why organizations like hers join together to provide support for the community. Through donations, the Mississippi Black Women’s Roundtable has organized water drives, provided gift cards for hotel stays and groceries, and provided outreach to find water to use from neighboring towns. “We’ve worked with a legislature from the Mississippi Gulf Coast to get truckloads of water brought into the city,” Welchlin says. She was then able to partner with local schools and community leaders to distribute the water to those in need.

Welchlin is now mobilizing community members to help those hardest hit groups like the elderly and single moms, and is urging residents who have cars to take water to the homes of the elderly so they can simply flush their toilets. She’s also been collecting donations like diapers and baby food to help single mothers who abruptly lost work and didn’t qualify for paid leave.

More than anything, Welchlin says residents and the organizations helping to restore these families are still in need of donations because people are still without water and struggling to get essential household and personal items. If you’re looking to help, you can donate to these local organizations that support families across Mississippi: