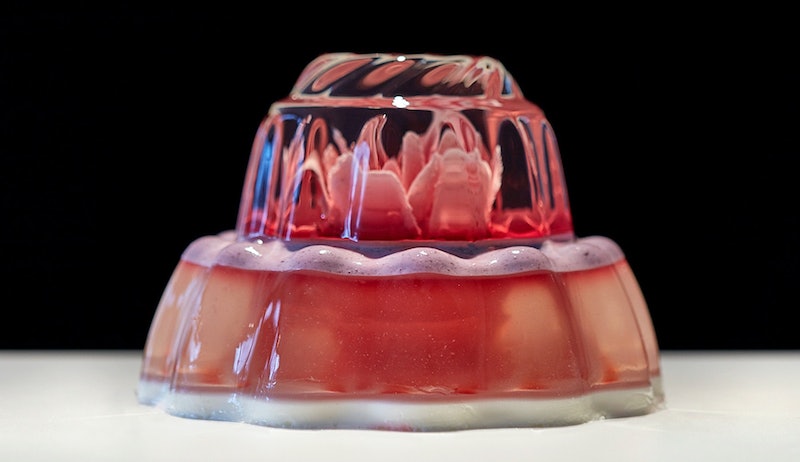 After a decade of stillness, Lemon L’orange is alive again.

Once upon a time, the Jell-O artist extraordinaire was the alter ego of my friend Katrina Kong. Today in Kong’s Brooklyn kitchen, however, Lemon pulses to life anew. I’m there to witness her rebirth as Kong stirs together gelatin, pomegranate juice, and fresh lime juice. A clean vintage gelatin mold rests on the counter, removed from the wall where it hung as decoration. Kong smiles while she stirs, remembering how Lemon L’orange was born.

Following a bad breakup and a family health scare, she craved a project, something that would bring her joy. A 1960s copy of The Joys of Jell-O entered her life in 2010, and she decided to cook her way through it in a blog. “It was the peak of Julie and Julia,” Kong laughs. Lemon L’orange, the persona through which she wrote the now-defunct blog, was a blond 1960s party maven kitted out in pearls, a luscious lush in cat eyes and lashes.

Lemon L’orange’s adventures in gelatin were the opposite of Kong’s life at the time, she says. A self-proclaimed introvert, she cooked her way through the book for about two years while going to culinary school, working in sustainable food, and getting her master’s degree in food studies at NYU. For Kong, who now works at the nonprofit FoodCorps, Lemon L’orange became a way to subvert feminine archetypes and do something silly. “It’s joyful. We all need a little bit of that,” she says. In December, the retro Jell-O hostess came back online — this time, on Instagram.

It would make sense, then, that a gelatin resurgence would emerge from the pandemic. The loneliness of COVID’s early days made people around the world seek comfort in nostalgia wherever they could find it, their kitchens included. The creations are even easier to share in the social media age.

The hashtag #jello has 1.6 billion views on TikTok and 500,000 posts on Instagram. Creator Nick DiGiovanni’s watermelon Jell-O tutorial on YouTube has more than 8 million views. Gucci used jellies in a 2020 campaign (which artist Sharona Franklin alleged they plagiarized from her; the brand’s creative agency denied the allegations). Los Angeles-based jelly artist Lexie Park, who makes jellies under her label Nünchi, has worked for everyone from Marc Jacobs to Ariana Grande to Nike. Jellies are cool and weird and colorful and fashionable, a far departure from a traditional birthday cake or cupcake.

Gelatin has gone through trend cycles on and off in American popular culture, from the heyday of post-war savory aspics — those shrimp and celery molds you love to hate — to the nonstop jiggling of ’90s television advertisements to the vodka-heavy shots of our college days. Social media has kicked open the door to gelatinous wonders once again. (There’s a group on Facebook, for example, called “Show Me Your Aspics” that’s 45,000+ members strong.)

“We definitely go back to it because of comfort and nostalgia for childhood,” says Freddie Mason, a creative strategist at Bompas and Parr, an internationally renowned creative firm which became known for its artistic jellies and later evolved into a full-fledged food experience design company. It has produced jiggly art for everyone from Netflix to Rolls Royce. As Mason speaks to me over Zoom from his London office, there’s a gelatin mold of Kylie Minogue’s breasts on the shelf behind him.

He finds that clients come to Bompas and Parr with the specific goal of creating a branded ritual for people to share online when they post food or beverage content. He uses the example of the Aperol spritz, crediting its resurgence with how well the brightly colored drink photographs. “You put an orange in it, and you take a picture of yourself drinking it, and everyone does it in Italy,” Mason says. “If you can replicate that, and you get something that’s visually effective, you’ll get every drinker in the country, in the world, photographing someone doing that.”

Jellies are certainly ripe for visual documentation. “They’re bodily and shuddery and sloppy and bouncy, but they’re also crystalline and perfect. And it’s the way they hold opposites within their texture, within their sensual properties, that is so appealing to us,” Mason says.

It also accounts for jelly’s extensive history, one that actually dates all the way back to the early aspics of 10th century Persia. It also has a long tradition in Vietnamese cooking (called thạch rau câu 3D) and Mexican cooking (called gelatinas florales); both dishes feature gorgeous flowers inside clear gelatinous orbs and are eaten during celebrations. For a long time, Britain was an aspic capital of the world, followed by France. It’s still popular today in Eastern Europe, Denmark, and Nepal.

The Jell-O brand was created in LeRoy, New York in 1897. It produced both sweet and savory instant gelatin mixes that by the 1930s were an American staple. Gelatin in general experienced a feminist rebranding in the 1950s, Mason says, recalling Laura Shapiro’s 2008 book Perfection Salad: Women and Cooking at the Turn of the Century, when it was marketed as a way to save time in the kitchen.

But as the vogue for gourmet foods entered American culture in the 1960s and 1970s, gelatins became less popular amongst adults. It was rebranded yet again in the 1990s, this time for children. Today, a fascination with jellies reenters the cultural sphere as nostalgia, yes, but also camp. The role of “woman in the kitchen” has been significantly defanged to the point where it’s a choice, not a requirement. As Mason says, “It’s no longer a threat, so we can fool around with it.”

Once maligned for its tackiness, juvenility, commercial and institutional qualities — it was the food of grandmothers or children, it’s a processed food, it’s served in hospitals — more and more people are (re)discovering the possibilities that lie within gelatin and using it to create visually interesting, delicious work. There’s a potential for artistry that divorces itself from pretension and instead enters a world of amazement.

This is also true when I visit the Solid Wiggles studio in Brooklyn. Light pours into the space and bounces off large sheets of gelatin designs so colorful and patterned it almost looks like stained glass. Jena Derman, a pastry chef, and Jack Schramm, a mixologist, created the company mid-pandemic. With backgrounds at esteemed venues like restaurant Momofuku and cocktail bars Booker & Dax and Existing Conditions, the two combined their strengths to make boozy (and nonboozy) jellies, a venture that’s since taken off — both are available for purchase nationwide.

In their studio is a sampling of flavors on a silver tray. Their aqua Showstopper, crossed through with colorful stripes and an intricate peach-colored flower, mimics a French 75 cocktail with flavors of lemon, gin, champagne, and absinthe. There’s also a ruby-striped Negroni Sbagliato, because of course. In the refrigerator, there’s a box of jelly eyeballs that taste like margaritas. They taste how they look: elegant and crystalline and, frankly, glamorous. They’re a far cry from college Jell-O shots, but inspired by them nonetheless.

The art world is on board, too. Kristin Worrall, a pastry chef and performance artist, made 33 jellies in a variety of sizes and shapes that combined unusual flavors: black sesame and passionfruit; lemon, strawberry, and coriander. The exhibition, “Take Comfort,” ran earlier this month at the Standard Space gallery in Sharon Connecticut. (You can still tour it online.) The gallery was kept at a cool 50 degrees to display them during the day and then the treats were refrigerated at night. Several pieces sold. People were, well, hungry for them.

For Worrall, jellies are a metaphor. Gelatins can’t be frozen, and they’re typically enjoyed by groups of people at parties. They’re the polar opposite of pandemic food: maybe meant for one person, to be eaten over the course of a week, for sustenance. Plus, there’s room for error. “It is thermo-reversible, so you can gel it and then if it doesn’t work out, you can melt it and re-gel it.” With Jell-O, there’s room for error, room for joy, room to grow. It becomes whatever shape you want it to be while still remaining mystifying to look at. No matter how popular focaccia became during the pandemic, bread just doesn’t do that.

With the reinvigoration of and re-fascination with Jell-O, it’s as if we’re reclaiming our sense of wonder for life and pleasure. The world is big again. It has more color and movement and shape. It’s uncertain but in a more beautiful way this time. You know, like jelly itself.

More like this
An Expert Weighs In On The Viral Raw Carrot Salad Trend
By Alexis Morillo
Learning To Love, Not Judge, The Lunchbox Wives Of TikTok
By Esther Zuckerman
I Spent 2 Years Trying TikTok’s Dating Advice
By Kailynn Johnson
Ashamed Of Your Screen Time Stats? Here's How To Change That
By Alexis Morillo
Get Even More From Bustle — Sign Up For The Newsletter
From hair trends to relationship advice, our daily newsletter has everything you need to sound like a person who’s on TikTok, even if you aren’t.