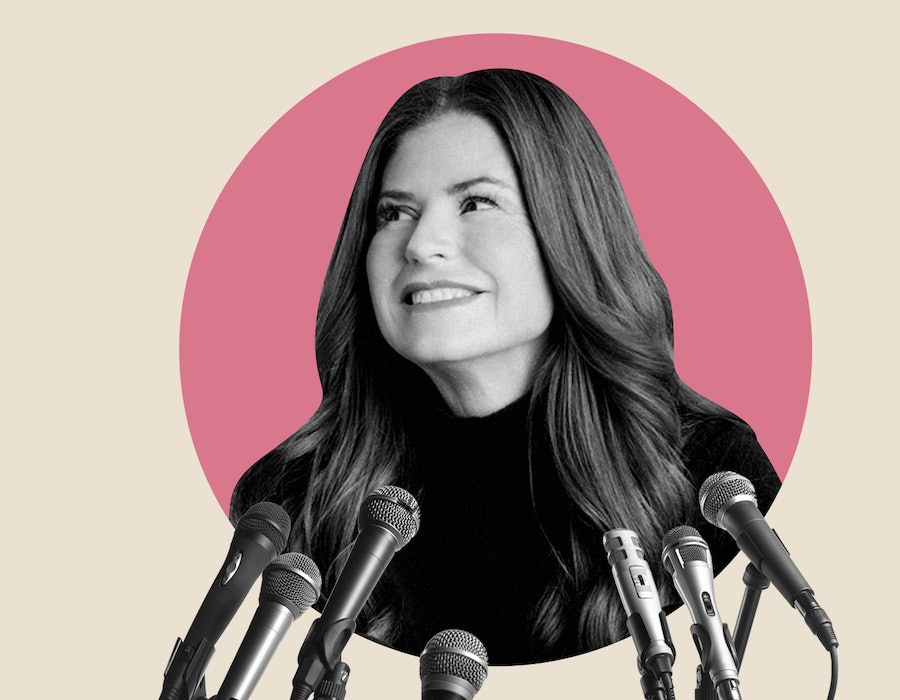 In Bustle's Quick Question, we ask women leaders all about advice — from the best guidance they've ever gotten to what they're still figuring out. Here, Hint Water founder and CEO Kara Goldin tells Bustle about her new book, navigating a male-dominated industry, and why she wants everyone to take risks.

Not much scares Kara Goldin. The founder and CEO of Hint Water — the largest non-alcoholic private beverage company in the U.S. — author, and mother of four has made major career pivots, proved her place amidst a male-dominated industry, and experienced success in situations where the odds were against her. When we chat on Zoom, her level of Zen as she tells me about these parts of her life exudes a confidence that can only be acquired after many years of deftly overcoming hurdles.

Goldin, who's previously been named one of Fast Company's Most Creative People in Business and Fortune's Most Powerful Women Entrepreneurs, published her first book this fall, called Undaunted, that reflects on her major career moments. Still, she didn't intend to write a book. "About four years ago, I started journaling when I was traveling a ton," she tells me. "Instead of sitting in my hotel room and watching TV, I just started writing. I was doing a ton of public speaking at the time, and people would ask me questions at the end — but their questions always came with a statement. They'd say things like, 'You've obviously always had a ton of confidence,' or 'You've never had any failures.'"

To spark her journal entry for the day, Goldin turned to these questions as prompts. In doing so, the entrepreneur began reflecting on instances in her life when she did lack confidence or fail at something. "I finally thought that maybe I should bind all my notes together because they could really help a lot of people who might not be in my audience," she says.

It's those anecdotes about Goldin's experience facing career hardships that inspires her, and it's something she wants to use as a tool to lift others up in their own work stresses. Here, she reflects on the biggest lesson she's learned in business, making a big career change, and her hack for crafting to-do lists.

What's the biggest lesson you've learned in your career?

I realized that it's so important to make sure that you're learning and to actually commit yourself to being a lifelong learner. I think this is something that creates happiness in people. When I studied finance and got a job at Time magazine, I was really trying to challenge myself. I'd want to wake up and do that all the time. It may sound really simple to like what you're doing, but it's not necessarily how people live their lives.

You landed your first job as executive assistant at Time Inc. by cold emailing one of its publications' managing editors. What advice do you have for people who are intimidated to contact those who are higher up or nervous in general about networking?

It really started with my parents saying to me, "What's the worst that could happen?" Whenever I've gotten scared or anxious about some step that I'm taking — and that could mean business or not — I start to think through it and realize that the odds of [the worst-case scenario] actually happening are pretty slim. So if you lay those things out, what you typically find is that the odds are pretty low. Maybe you wind up with a great story to tell, and maybe you get what you're asking for.

"If you focus on what you can't control instead of focusing on just doing whatever it is, then you can actually prove people wrong."

You've worked in media and in tech, then started your own beverage company. What was going through your mind when you made the career switch?

Something I've learned really by just working hard and doing what I do everyday is that innovation — including what we've done at Hint — typically doesn't come from people inside the industry. The fact that I didn't have experience was actually a benefit. People would size me up and basically say the odds of [Hint] going anywhere were really, really low — plus they'd say, "She's got four kids under the age of six."

In the beginning stages, we were finally ready to scale the company, so I was meeting with venture capital firms in Silicon Valley. And I remember this one meeting where I went into the office, and I walk in, and the gentleman said to me, "I read you have four children under the age of four." I said, "Yes, I do," and he goes, "So who's watching the kids?" I felt uncomfortable. But I just kept going. At the end of the day, if you focus on just doing whatever it is instead of focusing on what you can't control — in this case, wondering if was he intending to be mean or dismissive — then you can actually prove people wrong.

How do you deal with any self-doubt?

There were times where I felt uncomfortable, since it was uncharted territory for me, and I had failures. It's not that I don't acknowledge it. It's just that I don't allow it to stop me. You have to try to learn from those failures — they're not all going to work out, but you can learn from them and do better when you face the next one. I just kept pushing through and knocking on doors, because I thought I had something good here and I'd figure out a way to climb over the mountain.

What do you say to anyone who's dealing with imposter syndrome?

The key thing to recognize is that you never really understand someone's journey until you live it. It's so easy for someone to look at me and think that I built this thing overnight — but it's been 15 years of a lot of work. There's a lot that goes on in between the lines, and it doesn't typically all just happen. For anybody.

Instead of focusing on, "Why not me?" — know that it will be you at some point if you put in the hard work and really focus and not get sidetracked by all the things that you ultimately think can stop you.

Telling somebody that there's a problem isn't really helpful — you don't want to dump it in someone's lap. But actually showing that you're doing some work or offering suggestions on how you might be able to change things means you've thought about it and you're not leaving it in someone else's hands to figure out.

One thing I don't do is overload a to-do list. I never take on too much, because doing that really overwhelms people. You set yourself up for failure. Instead, be realistic and just take on a few really key things. And once you get those done, then you can add more. It's a mindset of really showing you've got a lot more done than you had anticipated. It really works.