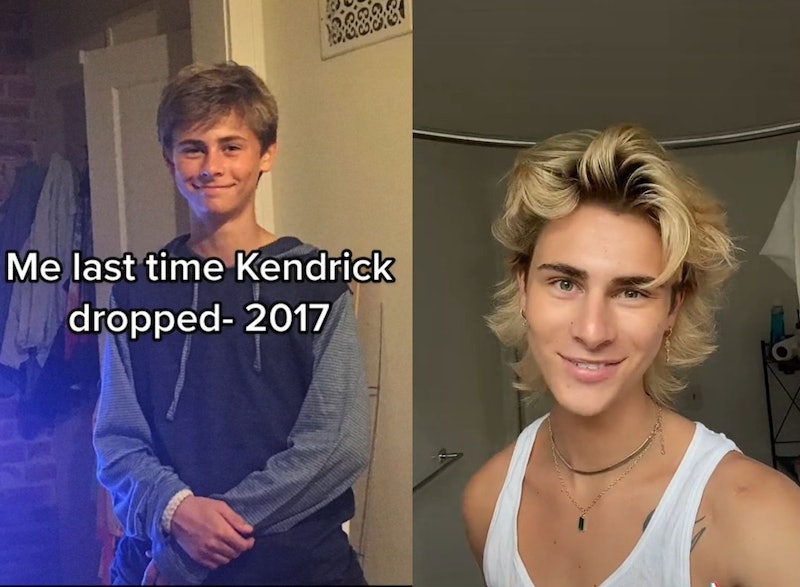 TikTok/@steezynoodles
By Courtney Young
May 26, 2022

After five years of near silence, Grammy and Pulitzer Prize winning artist Kendrick Lamar, recently returned with a new album, Mr. Morale & The Big Steppers. The album’s first track, “United In Grief,” opens with, “I've been goin' through somethin', One-thousand eight-hundred and fifty-five days, I've been goin' through somethin', Be afraid.” And that snippet is now making its rounds on TikTok.

In the song, Kendrick reflects on his nineteen years in the music business, and his five years outside of it. He raps about mental health and therapy, fame, and the ways in which we all suffer together. It’s a somewhat heavy opener to an incredible album, and on TikTok, the song has new legs, because, after all, we’ve all been going through something.

On the app, the song has been paired with more than 70k videos, with users stitching photos of themselves today, and one-thousand eight-hundred and fifty-five days ago, the last time Kendrick dropped an album. For the zoomers who populate the app, the last five years have been formative ones. If you ask some elder Kendrick fans, the last five years have been marked by a global pandemic and perhaps a new apartment. For his Gen Z fans, the years without Kendrick have been years of self discovery and literal puberty.

One user, @simp4optimusprime, dropped her five-year glow up, gaining more than 1M views, 240k likes, and hundreds of comments like, “5 years can really change somebody.”

Another user, @steezynoodles, shared his transformation from (seemingly) a child to a young adult. With more than 648k views and 120k likes, the video collected comments like, “oh my god i didn’t even recognize u.”

This trend goes beyond puberty to show how even us big kids can transform in a five-year span. Like many before it, this trend can also be used as a bit of a thirst trap. The videos that make up this trend collect comments like “RIP to the guys that didn’t invest,” “so fine respectfully,” and “let me take you to a kenny concert.”

TikToker @lilyungguy shared his before and after photos to the tune of “United In Grief,” going from your friendly neighborhood frat guy to a tatted, mulleted, more alternative kind of dude. His video collected more than 1.8M views, 356k likes, and comments like, “bro a different person,” and “I think I’m in love with you.”

This glow-up trend is just one subgroup of the Kendrick Lamar conversation happening on TikTok. On the app, the tag #KendrickLamar has nearly 2B views. Gen Z’s love for Kendrick feels appreciative in a way that is rare online these days. Perhaps all we needed to bridge the millennial/Gen Z divide was a new Kendrick album.