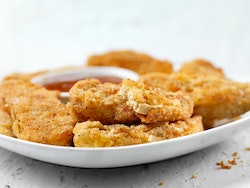 In what may be the most bizarre sentence you read today, KFC is testing 3D printed chicken nuggets in Moscow, Russia. I know. I’ll give you a second to process. On July 16, KFC announced that they were in the final testing stages of their self-described “meat of the future.” The fast-food chain is working with 3D Bioprinting Solutions, which a private Russian medical company developing and producing materials for 3D bioprinting. This relatively new technology is used to make everything from medicine to 3D printed human tissue and now, chicken nuggets.

So, how exactly does one 3D print chicken nuggets? Per the press release, the lab-created nuggets combine plant material and chicken cells, reproducing the texture and flavor of chicken meat with minimal animal involvement. (Though the cells are harvested from actual chickens, the press release stated that “the production process does not cause any harm to animals.”) For these particular lab-built nuggets, 3D Bioprinting Solutions is creating the chicken, and KFC is adding their signature blend of 11 herbs and spices. If all continues to go according to plan, these will be the first lab-produced chicken nuggets.

“At KFC, we are closely monitoring all of the latest trends and innovations and doing our best to keep up with the times by introducing advanced technologies to our restaurant networks,” Raisa Polyakova, General Manager of KFC Russia & CIS, said in the press release. “Crafted meat products are the next step in the development of our ‘restaurant of the future’ concept.” Polyakova added that the 3D printed nuggs also aim to help address “several looming global problems. Our experiment in testing 3D bioprinting technology to create chicken products can also help address several looming global problems like climate change and food sustainability."

KFC’s 3D printed chicken nuggets are slated to start testing in select markets this coming fall. Unfortunately, we won’t be seeing them stateside anytime soon as the lab-made nuggets are initially launching in Russia. If you’re looking for exclusively plant-based chicken nuggets options, you’ve got more than a few options including KFC. This year, KFC introduced Beyond Chicken to its menu, serving meat-less “chicken” across the country.

Though it may be the first time you’ve heard of it, 3D printed food isn’t brand new. Everything from 3D printed steak to 3D printed cannabis-infused cups are in various stages of development. And lab-made food doesn’t appear to be going away any time soon. Per a press release from June 30, 2020, the current 3D food printing market is worth an estimated $485.5 million. By 2025, experts anticipate the 3D food printing market will expand to $1 billion.

Whether or not 3D printed food is the best, healthiest, most eco-friendly option is still very much up for debate. While some argue it will make food more sustainable, others have concerns that rise in 3D printing may cause more waste depending on the materials used. Either way, KFC’s latest endeavor appears to be following a growing trend. Fingers crossed 3D printed french fries are next up on the docket.

More like this
I Tried The $20 TikTok Viral Oishii Strawberries — Here's What I Thought
By Sophie Hanson
Trust Me, Pickle Martinis Are The New It Drink Of The Season
By Emma Carey
On TikTok, A ‘Snackle Box’ Is The Best Way To Pack Charcuterie On-The-Go
By Meguire Hennes
The Finger Lickin’ Good KFC x HYPE Collab Serves A Bucket Bag For Chicken
By Darshita Goyal
Get Even More From Bustle — Sign Up For The Newsletter