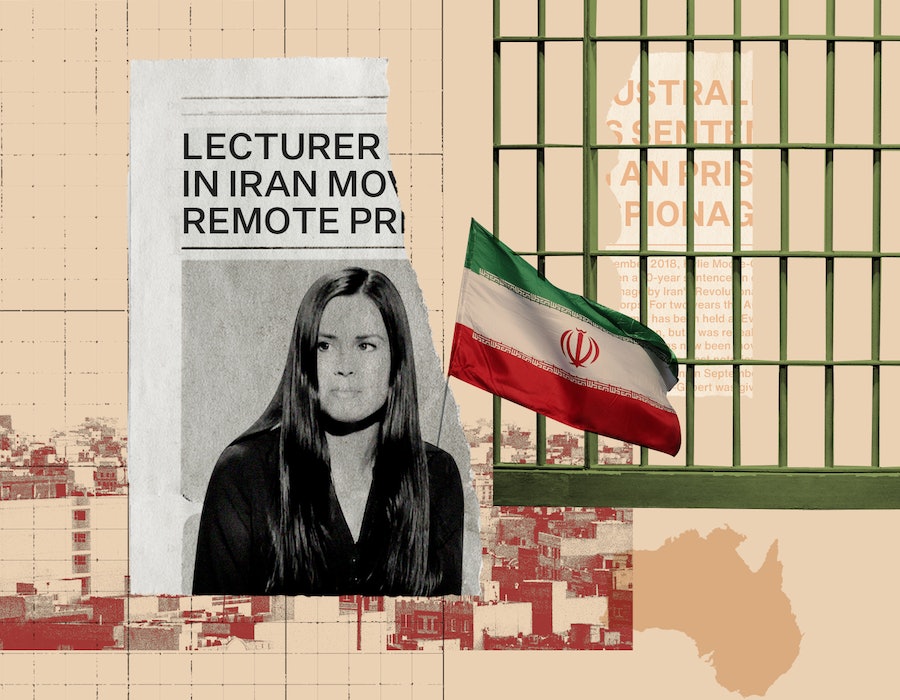 In September 2018, Kylie Moore-Gilbert was given a 10-year sentence on charges of espionage by Iran's Revolutionary Guard Corps. For two years the Australian academic has been held at Evin Prison in Tehran, but it was revealed last month that she has now been moved to one of the country's most notorious facilities, Qarchak, a prison located in the middle of the desert.

Both Moore-Gilbert and the Australian government deny all the charges levied against her. In January this year, the Guardian published excerpts from a letter Moore-Gilbert wrote to a prison authority in which she told them she was "an innocent woman" who is suffering "entirely alone" in Iran.

Who is Dr Kylie Moore-Gilbert?

When & why was she arrested in Iran?

While carrying out research in Iran during September 2018, Moore-Gilbert attended a conference in Tehran. It was here that she was arrested when "a fellow academic at the conference" and "a person she interviewed for her research" flagged her as "suspicious" to the Revolutionary Guards, per the Guardian. Moore-Gilbert was held for a number of months before being convicted to ten years in September 2019 and sent to Evin Prison in Tehran.

While in Evin, Moore-Gilbert wrote a number of letters to the Australian Prime Minister Scott Morrison and Iranian officials begging for release and describing the living conditions she was having to endure. She describes being kept in a 2x3 metre cell and only being allowed one four-minute phone call with her family over a period of three months.

In addition to this, reports have emerged that Moore-Gilbert has been sleeping on the floor, has been in solitary confinement, and gone on several hunger strikes. It's also been said that she's been beaten by Iranian forces "for trying to comfort new prisoners by passing notes and writing to them on prison walls," per BBC News.

During her imprisonment in Evin, Irani officials suggested Moore-Gilbert become a spy in exchange for her release, which she refused. In a letter obtained by the Guardian Moore-Gilbert wrote to her "case manager" saying: "[P]lease accept this letter as an official and definitive rejection of your offer to me to work with the intelligence branch of the Iranian Revolutionary Guard Corps”

The letter continued: "Under no circumstances will I be persuaded to change my decision," she wrote. "I am not a spy. I have never been a spy and I have no interest to work for a spying organisation in any country. When I leave Iran, I want to be a free woman and live a free life, not under the shadow of extortion and threats."

In a letter to the Australian Prime Minister, Moore-Gilbert also says the Revolutionary Guard have attempted to lure her husband to Iran to imprison him also.

Appeals for her release have failed, and Moore-Gilbert has now been moved to Qarchak prison, which is situated in the desert. Sources are saying that the academic has recently been "forcibly" removed from COVID-19 quarantine into the prison's general population.

As the Sydney Morning Herald reports, Qarchak is frequently used to house the country's political prisoners, and former detainees have described their time there as "frightening" and revealed that foreigners "are often kept in extreme isolation."

What is being done to secure her release?

Australia's Department of Foreign Affairs and Trade (DFAT) has said that Moore-Gilbert's case is one of their "highest priorities" but have shared few details about their strategy surrounding it. The government believes quiet diplomacy will be their most effective means of securing Moore-Gilbert's release.

Their statement continued: "We continue to believe that Kylie's best chance at release is through diplomatic avenues and are in close contact with DFAT and the Australian Government on the best ways to achieve this. We are thankful that Kylie has so many strong supporters and friends who love and care about her safe return."

There is also a public-driven campaign called Free Kylie who are working to ensure momentum around the case does not let up. On their website, the Free Kylie campaigners state: "We have the deepest respect for the DFAT's directive to remain quiet about Kylie's situation so that quiet bilateral diplomacy can bring her home, but we believe this strategy has failed."

Their statement continues: "We are calling for a public campaign to raise Kylie’s profile among the Australian public, and to pressure the government to explore all diplomatic options to resolve the situation."

What can you do to help?

As the Free Kylie campaign suggests, there are a number of ways to help Moore-Gilbert. Those living in Australia can write to their local MP and encourage them to fight for Moore-Gilbert's freedom via official channels. Free Kylie suggest international supporters spread the word on social media and raise concerns with their local news outlets.

There are also petitions to sign, including the Free Dr Kylie Moore-Gilbert petition on change.org which has already received nearly 115,000 signatures — just 35,000 off its goal. There is also the Academic Petition set up by Free Kylie, which is collecting the signatures from academics and graduate researchers "in order to present a targeted petition to the Australian government and the University of Melbourne calling for action for Kylie."

Correction: A previous version of this story misreported the location of the prison in which Kylie Moore-Gilbert is being held. It has been updated to include the correct location.

More like this
It’s About Time Black Girls’s Voices Were Heard – & 'Girlhood Unfiltered' Is The Start
By Paula Akpan
Iran Has Issued A Death Sentence Over Mahsa Amini Protests
By Catharina Cheung, Darshita Goyal and Maxine Harrison
Footballer Jake Daniels Shared His Thoughts On A World Cup Boycott
By Sam Ramsden
Twitter Is In Awe Of Alex Scott & Her Show Of Solidarity At The 2022 World Cup
By Sophie McEvoy
Get Even More From Bustle — Sign Up For The Newsletter

This article was originally published on Aug. 4, 2020